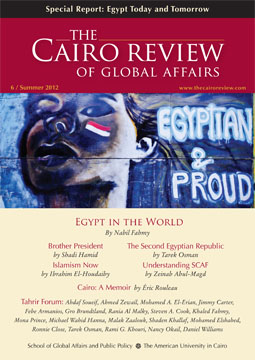 Toward Liberty, Justice, and Human Dignity.

The Supreme Council of the Armed Forces (SCAF), which has governed Egypt since the fall of Hosni Mubarak—and apparently wants to hold on indefinitely—can’t justify itself on its record. Especially when it comes to human rights. SCAF presented itself as the shepherd of Egypt’s transition to democracy. Instead, SCAF trampled rights of Egyptians across the board, repressing speech and public gatherings and preserving an unfair justice system. In some areas, SCAF has outdone Mubarak.

A Six-Point Strategy for a Paradigm Shift.

Road accidents are common everywhere, but what is striking in Egypt is how little the government seems to care, despite the high human and economic costs to society. An estimated 12,000 die and another 154,000 are injured in crashes each year, making Egypt’s roads among the most dangerous in the world. Accidents also cost Egypt as much as 30 billion L.E. ($5 billion) a year, according to some sources. Government neglect in road safety is yet another part of the legacy of misrule and unaccountability following decades of dictatorship.

The Story of a Space.

This is an open mic night—the ninth of its kind—in Minya, a city on the Nile some two hundred kilometers south of Cairo. The performances range from the comic and the poignant to the explicitly political, but all have the same purpose in mind: to reclaim Egypt’s public space after the fall of the dictator. “When someone decides to speak their mind in public, even to tell a joke,” explains organizer Shady Khalil as he watches from the sidelines, “that’s political participation.”

I was in the United States 16 months ago when an Egyptian national popular uprising forced Hosni Mubarak to quit his presidency, and I was in the United States again this week when Mohammed Morsi was elected as the new Egyptian president. Then and now, Americans remain unsure about how to react to the popular revolutions that felled their long-time autocratic Arab allies, who in most cases were replaced by more legitimate, Islamist-led governments.

Replacing the Darkness of Ignorance with the Light of Knowledge.

Why I believe in Egyptians.

By Mohamed A. El-Erian

By Steven A. Cook

When Egyptian President Mohammed Morsi declared it his “duty” to free Omar Abdel Rahman—the man behind the 1993 bombing of the World Trade Center that killed six and injured one thousand—it was not a very auspicious beginning for relations between the United States and the ‘new’ Egypt. The U.S. Congress, particularly the delegation from the New York City area, expressed outrage.

A Need for Justice

How a nation in transition accounts for past injustices is a telling indicator of the overall health of transition. Egypt has changed in tangible and consequential ways. Yet, the initial promise and the sense of transformational possibility that marked the fall of Mubarak is now something of a distant memory. The Mubarak trial encapsulates many of the flaws that have undermined the prospects for fundamental change in Egypt.

Over the last few decades, Copts—and most other Egyptians—have experienced various forms of political, social, and religious repression. But the Copts’ particular victimization as Christians became clearly highlighted just a few weeks before the outbreak of the January 25 revolution.

Women have played a prominent role, under very different circumstances, in all of the countries embroiled in the Arab Awakening, including Egypt. This is the promising side of the coin. But, a negative dimension also appears to be emerging. Gains made previously by women in societies in the Middle East and North Africa are being challenged. There are reports that women who played decisive roles in democracy movements are being excluded from negotiations on future systems of governments.

Like many, I had great hopes for change in Egypt after the revolution. I was excited to move back to Cairo as the new country director for Freedom House, an NGO that supports democratic change, monitors freedom, and advocates for democracy and human rights across the globe. In August 2011, I packed up my life and my two-year-old twins and left England, where I had been living while working on my PhD, to return to my homeland. I was not naïve enough to believe that it would be an easy job. But I never imagined that just a few months later I would be in a cage.

Refugees are among the most vulnerable, marginalized, and disadvantaged people in any society. They endure traumatic experiences including arduous journeys that often affect their mental health and physical wellbeing. They live with the insecurity that comes with being a refugee in a foreign land. They lack the legal protection afforded by citizenship and the traditional support structures and channels for recourse in cases of abuse or exploitation. And these woes become compounded many times over in periods of crisis—such as the upheaval that Egypt has undergone since the January 25 revolution.

Merna Thomas is the co-founder of a feminist group called Noon El-Neswa, or Her, which aims to harness the bourgeoning use of street art as a protest tool to challenge gender stereotypes and generally ignite debate about the place of women in Egypt. One of the most striking images produced by Noon El-Neswa activists is a stenciled triptych of three women wearing no veil, a hijab, and a face veil, respectively, with the admonition: “Don’t label me.” Sometimes a few words of text cry out against misogyny, such as the scrawl declaring “Nothing is for men only” seen around Cairo lately.

On a weeknight in May, Tamer Qenawy, a thirty-year-old revolutionary, is pacing in El-Hosary Square in 6th October City, a satellite of Cairo. He and friends are setting up a film screening. They have tied a white screen to a fence right by a minibus stop. The projector and laptop are here but Qenawy is waiting for some other guys to bring the sound system. A crowd gathers and then the program begins: a screening of homemade videos depicting violent attacks on protesters during a demonstration outside the Ministry of Defense three weeks earlier.

Most Egyptians hailed Egypt’s first democratic elections after decades of authoritarian rule. Yet, many artists, filmmakers, actors, writers, and musicians are not pleased that the vote tallies gave Islamists a majority in parliament (its lower house since dissolved by a Supreme Constitutional Court verdict based on a technicality), and more recently the presidency.

How a Failure to Lead Brought Down the Leader.

The oath-taking of a popularly elected president did not complete the democratic transition in Egypt. The cycle of military autocrats has been broken, yet the Supreme Council of the Armed Forces remains a formidable power. Until such time when Egypt is demilitarized, SCAF will likely be part of a marriage of convenience with the Muslim Brotherhood.

The cradle of modern political Islam, Egypt gave rise to the Muslim Brotherhood as well as a variety of other movements, including Salafis and Neoliberal Islamists. Now the revolution is shaking up not only the authoritarian state but also the autocratic structures of the country’s Islamist organizations and institutions. The result is likely to be a new wave of diverse, policy-based Islamist activism.

Coming of age as a Jew in Egypt, the author protested against the British occupation and, as a young journalist, interviewed Muslim Brotherhood founder Hassan El-Banna. Amid the crackdown on suspected Zionists and communists, he emigrated to France. Years later he returned to Cairo, this time as a correspondent for Le Monde, to interview another important Egyptian—President Gamal Abdel Nasser.

To the surprise of many, Ahmed Shafik, a former military leader and Mubarak’s last prime minister, ran a respectable second in the race to become Egypt’s freely elected president. An analysis of why 48.3 percent of the voters preferred a face of the ousted regime to a candidate of the revolution.

Egyptian political change is causing unease in Israel and among Palestinian leaders in Ramallah. Questions have arisen about the durability of the 1979 Egyptian-Israeli peace treaty. In fact, a case can be made that despite the rise of Islamists in Egypt, this is an opportunity to rethink deeply flawed and outdated approaches to Arab-Israeli peacemaking.

Egypt in the World

The leadership and vision of Nasser and Sadat gave way to foreign policy stagnation under Mubarak. After the popular revolt, Egypt now has an opportunity to regain its place as a political and ideological wellspring for the Arab world. A blueprint for a strategic shift.

Mohammed Morsi was a pedestrian politician until recently, little known outside the circles of the Muslim Brotherhood. Today, he is the first democratically elected president in Egyptian history. An inside look at Morsi’s rise to power, and what to expect from the first Islamist to lead the Arab’s world’s most populous and important country.

The January 25 revolution brought down the first, military-dominated Egyptian republic established after the 1952 officers’ coup. A new era of youth-driven dynamism has begun, pointing to a more open, efficient, and civic political system that should foster vigorous, healthy debate in the governing of the country.

“I don’t have a crystal ball”

Nabil Elaraby, former Egyptian foreign minister and former judge of the International Court of Justice, became secretary general of the Arab League amid the Arab Spring upheavals in 2011. He speaks with Managing Editor Scott MacLeod about the political transition in Egypt, the bloodshed in Syria and the prospects for democracy in the Middle East.

Witness to an Election, and to History

Ayman Mohammed Abdel Sabour is a lawyer from Alexandria and a member of the I Am Egyptian Association for Development and Human Rights. It is a warm spring evening, and we are both official observers for the 2012 Egyptian presidential election. He and I are in the Nile Delta city of Damanhour, standing in the city’s cultural center where votes from polling stations in two of the Behera governorate’s fifteen districts are being aggregated. There are a few journalists here as well, watching a team of senior judges tally the figures under military protection.

Where are you, men of honor? Tunisian human rights activist Radhia Nasraouiproudly recalls a woman shouting these words in front of the government hall in Sidi Bouzid, the first flashpoint of protests that eventually brought down Tunisian ruler Zine Al-Abidine Ben Ali in 2011.

A timeline of Egypt’s political transition.

President Mohammed Morsi’s Speech at Cairo University After Taking the Oath of Office.