In Cairo, a young Sudanese man, his wife, and their newborn baby girl emerge from a taxi. They are arriving from the hospital to the apartment of a cousin where they have been staying since being evicted from their own home following the revolution. Some young Egyptian men spot the family, pull the man away, and proceed to taunt and beat him. “You’re not welcome here anymore,” one of them barks. “Mubarak is gone. You should go, too.”

Refugees are among the most vulnerable, marginalized, and disadvantaged people in any society. They endure traumatic experiences including arduous journeys that often affect their mental health and physical wellbeing. They live with the insecurity that comes with being a refugee in a foreign land. They lack the legal protection afforded by citizenship and the traditional support structures and channels for recourse in cases of abuse or exploitation. And these woes become compounded many times over in periods of crisis—such as the upheaval that Egypt has undergone since the January 25 revolution.

Despite expectations that the revolution would bring wider respect for human dignity, refugees in Egypt are arguably facing greater discrimination, xenophobia, restrictions on movement, evictions from homes, and an overall hostility. Previous Egyptian governments did officially tolerate the presence of refugees. Some 44,600 people, mainly fleeing the conflicts in Sudan, Somalia and Iraq, are registered with the United Nations High Commissioner for Refugees; there are also an estimated 70,000 unregistered Palestinians. But Egypt has never established a proper framework for asylum: the vital human right of people to seek international protection when they face persecution in their home country. Egypt has no institution to govern asylum, nor legislation to regulate the rights and obligations of refugees. In general, the approach to refugees has been one of monitoring and control, rather than of providing rights and protection. Thus, refugees in Egypt found themselves in precarious, unpredictable, and untenable conditions.

Does a democratic transition ensure the advancement of human rights? Not necessarily. Therefore, there is an urgent need to address this issue through formal as well as informal structures and in a manner that will be mutually reinforcing. The government must develop mechanisms to handle refugees, while informal practices and the de facto policies that currently assist refugees need to be codified. For their part, refugee advocates should engage with the broader human rights movement to influence new policies and raise public awareness about the plight of refugees.

Some argue that societies undergoing massive transformation become too inwardly focused, and that the nationalist sentiment in the Egyptian revolution contributed to a rise in xenophobia. Yet, there is room for some optimism. The widespread demand for justice and a new rights-based approach to governance may well lead to improvements in the lives of refugees in Egypt in the long run.

Shaden Khallaf teaches at the Center for Migration and Refugee Studies at the American University in Cairo. She served in the Office of the United Nations High Commissioner for Refugees from 1998 to 2010, most recently as an advisor on Middle Eastern humanitarian and political affairs. 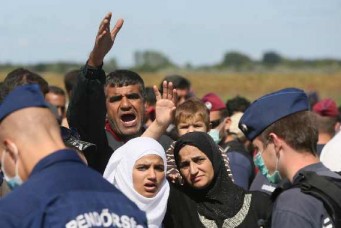