A full five months earlier, Egyptian government officials had already put the number at 150,000. What accounted for this discrepancy, the researchers wanted to know. Thus began CMRS’s latest endeavor: a comprehensive study to get a picture of the Syrian refugee crisis, and provide a better guide to addressing it for international, regional, and local policy makers.

CMRS grew out of the Forced Migration and Refugee Studies program, one of only six in the world, established at AUC in 2000. Besides conducting research, the center offers a master’s degree as well as training programs for civil servants and non-governmental organization staff. The approach is strongly interdisciplinary, providing specialized instruction and training in areas such as sociology, law, psychology, mental health, politics, and economics. The center runs the Cairo Community Interpreters Program, which trains interpreters serving different refugee communities in Egypt.

CMRS Director Ibrahim Awad says that migration and refugee topics are vastly understudied. He adds that a particularly neglected area is labor migration, considering the waves of people leaving, coming to, and moving within the region in search of work. CMRS is working on two studies in this area; one on whether young Egyptians are interested in migrating for jobs elsewhere, and the second on attitudes toward economic migration and policies affecting it in Egypt and Tunisia in the aftermath of the Arab Spring. “Migrants are no less deserving than the exiled,” says Awad, formerly director of the International Migration Programme at the International Labor Organization. “They don’t have a universally adhered to international legal instrument for their protection.”

CMRS’s Syrian refugee study, which the center will carry out for the UNHCR, follows up a similar one conducted on Iraqi refugees in Egypt in the aftermath of the 2003 war in Iraq. The first question is why so many of the Syrian refugees have failed to register with the UNHCR, the international body mandated to provide legal protection and humanitarian assistance. Another important goal of the study is to determine how the refugees are coping amid political instability and economic decline in their host country. Other critical questions include how the refugee conditions have made women vulnerable, and whether young girls are being forced into early marriages due to economic hardship. With the Syrian war and the refugee flow showing no signs of ending, CMRS’s work on the crisis has only just begun. 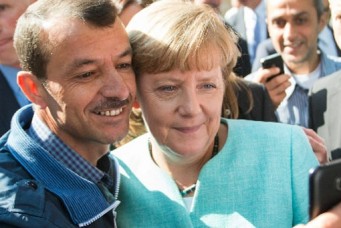 On Selfies with Refugees

The Cost of Syria Refugees