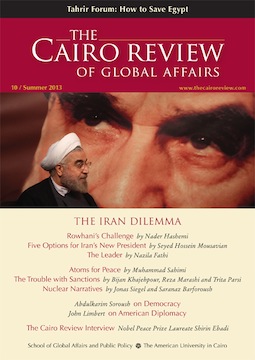 No Jobs and Bad Jobs

Legions of young Egyptians are unemployed. Many eventually find work but in an informal labor sector that deprives them of social security and other benefits. The economic frustrations of a new generation pose a serious threat to Egypt’s democratic transition.

Egyptians toppled the Hosni Mubarak regime in 2011 despite a solid economic growth rate. The lesson: politicians and policymakers must give due attention to the real needs and the expectations of vast numbers in the marginalized segments of the population.

With President Obama calling for a diplomatic solution, and the election of Hassan Rowhani as Iran’s chief executive, a fresh approach to nuclear negotiations is possible. But if diplomacy fails, there’s an Iranian case for withdrawing from the Nuclear Non-Proliferation Treaty.

Back from the Brink

Egypt’s economy is sinking under decades of misrule. Achieving a better future requires a transformation. Here’s the problem and how to fix it.

Hassan Rowhani scored an impressive victory in Iran’s presidential election in June with the help of reformists, but can he alter the political trajectory of the country? The odds are not favorable.

Iran’s colorful presidents rivet the world’s attention, but the real power in the Islamic Republic rests with a politician-cleric who is hardly known outside the country: Ayatollah Ali Khamenei. His story explains today’s Iran.

The Trouble with Sanctions

By Bijan Khajehpour and Reza Marashi and Trita Parsi

Sanctions driven by the United States are now devastating Iran’s economy. But until the West lays out a detailed vision for normal relations with Iran, punitive measures may increase the risk of war.

The deal for Iran to provide natural gas to Pakistan and India promised to bolster peace and prosperity in a volatile region. Instead, it became engulfed in a geopolitical struggle.

Western media coverage emphasizes how Iran is a threat to global security but rarely explores the more complex contours of the dispute. Are journalists once again fueling a dangerous showdown in the Middle East?

Reflecting on democracy, the Iranian philosopher argues: “In a tyrannical system, the first organ that stops functioning is the judicial heart, and that when our heart is so feeble, having a strong and robust body is little more than a naïve and ridiculous dream.”

Three decades of American hostility to Iran has resulted in a “satisfying purity of indignation” but little more. It is time for presidential leadership, starting with small and symbolic gestures, to prevent an armed conflict that will cause irreparable damage to both sides.

Western powers suspect that Iran is developing atomic weapons. But the controversy over the country’s nuclear program obscures the fact that Iran launched its pursuit of nuclear technology for peaceful purposes a quarter century before the Islamic revolution. It was the United States that helped Iran launch its nuclear quest.

In 2003, Shirin Ebadi became the first Iranian and first Muslim woman to be awarded a Nobel Peace Prize. She has championed human rights in Iran for three decades, and was a founder of Iran’s women’s movement. Since the anti-freedom crackdown in 2009, she has traveled the globe to press the case for justice in the Islamic Republic.

As I was turning thirteen, I packed up everything I had to embark on a new life in Tehran with my Iranian mother and stepfather. In 1999, I left behind everyone and everything I knew in Los Angeles, including my American father.

By Erin McDonough and Pesha Magid

The official unemployment rate in Egypt rocketed to 13.2 percent in the first quarter of 2013. The news added to the gloom of Egyptians complaining that the country’s economic fortunes have taken a nasty turn for the worse since the January 25 revolution.

Two and a half years after the fall of President Hosni Mubarak, a year after the election of his successor, Mohammed Morsi, and after Morsi’s sudden ouster and the appointment of an interim president, Mansour Al-Adly, head of Egypt’s Supreme Constitutional Court, in July, the country is still searching for its identity.

A Case for Rapprochement, Badly Argued.

The Way of the Knife

Parsing the tale of a State Department insider.

A timeline of Iran’s Nuclear Program.

The United States and Iran

The United States and Iran