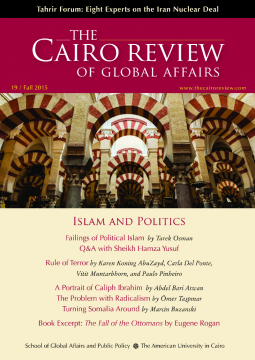 Boutros Boutros-Ghali, the first Arab and African secretary-general of the United Nations from 1992 to 1996, has donated his library of books and papers to the American University in Cairo, offering a rare glimpse into the elder statesman’s life.

By Sara Edmunds and Scott MacLeod

Happenings, speakers, and events at the American University in Cairo.

Saudi Arabia’s longtime minister of foreign affairs, Prince Saud Al-Faisal passed away this Ramadan. He was among the kingdom’s most influential men. A former Egyptian foreign minister reflects on the Arab statesman and diplomat.

Does religion cause violence? Or is it just our human nature?

The rise of the Islamist movement in Egypt.

Discontent and Its Civilizations

An exploration of discontent in Lahore, New York, and London.

After the Arab Spring, the rise of Islamists stirred social polarization in many countries. The most potent Islamists today are the jihadists who have seized control of territory through extreme violence. Can political Islam be reconciled with secular modernity?

The Islamic State in Iraq and Syria (ISIS) proclaimed a caliphate in 2014. An in-depth report on how its militants are using severe brutality and radical interpretations of sharia law to govern a large civilian population.

From the Archives: A Portrait of Caliph Ibrahim

Abu Bakr Al-Baghdadi rarely allows himself to be seen in public, hence his nicknames the “phantom” and the “invisible sheikh.” A veteran journalist pieces together the story of the most feared jihadist leader since Osama Bin Laden.

The Problem with Radicalism

It is commonplace to associate violent extremism with Islam, but terrorist organizations from recent history show that radicalism is not explained by religion. The concept of relative deprivation is key to understanding the roots of terrorism.

The rise of the jihadist Al-Shabab group has compounded Somalia’s problems with internal warlords and regional rivalries. Will a new constitution and elections in 2016 finally bring hope to this “failed state?”

With the fall of the Ottoman Empire after the First World War, Arabs found themselves divided into new states under British and French domination. Today’s crises are a legacy of political decisions made a hundred years ago.

Eight experts on what the nuclear deal means for Iran, the United States, the Middle East, and the world.