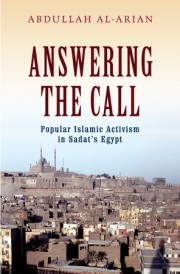 Abdullah Al-Arian carefully reconstructs the history of Islamic student activism on Egyptian university campuses in the 1970s and the subsequent integration of Al-Gamaa Al-Islamiyya into the Muslim Brotherhood. His primary goal in Answering the Call: Popular Islamic Activism in Sadat’s Egypt is to explain how Egypt’s leading Islamist movement successfully reconstituted itself in the 1970s after more than a decade of repression and political exclusion. The book is based on a rich and diverse set of sources including newspaper accounts, memoirs, interviews, published oral histories, student publications from the period (for example, pamphlets, conference programs, and student wall magazines that were posted on university campuses), in addition to Brotherhood publications. The author makes an important contribution to the scholarship on Egyptian politics and society, the Muslim Brotherhood, and Islamist politics more generally.

When President Anwar Sadat began releasing Brotherhood leaders from prison in the early 1970s, the movement was battered and beaten. Yet within the short span of a decade it reemerged as the leading social and political opposition force in the country. How did this happen? Al-Arian’s answer focuses on Islamic student activism and particularly Al-Gamaa Al-Islamiyya. He convincingly argues that the group’s dynamism, social activism, political engagement, and its subsequent absorption into the Brotherhood breathed new life into the movement, enabling the Brotherhood to successfully return to prominence in the 1980s.

While acknowledging the critical importance of the 1970s for the Brotherhood, few Western scholars analyze the specific history of the period. Most focus on the more extreme offshoots of the Islamic movement during this period; distinguishing his work from that of Gilles Kepel and Emmanuel Sivan, for instance, Al-Arian concentrates on the much larger number of individuals who would join the Brotherhood in the 1970s.

Al-Arian provides essential background in his discussion of Shabab Al-Islam, a student group that emerged in the first years of Sadat’s presidency. The group was overshadowed by more prominent student groups but was important for reintroducing Islamic ideas and activism on university campuses after many years of absence during a period in which leftist ideas dominated student politics. Al-Arian examines the group’s complex relationship with the Sadat regime, which attempted to co-opt it as part of a general effort to repress communist, Marxist, and Nasserist ideas among Egyptian students.

Al-Arian shows how the Brotherhood leaders emerged from prison in 1971 to find an increasingly diverse Islamist field, one in which they were no longer necessarily dominant. In addition to a number of radical groups influenced by Sayyid Qutb, the Brotherhood encountered a public sphere that included popular preachers such as Abdel Hamid Kishk and Muhammad Al-Shaarawi, popular Islamic intellectuals such as Mustafa Mahmoud, and a new president who was increasingly adopting Islamic language and symbols to justify state policy. Here Al-Arian adeptly analyzes the internal debates within the Brotherhood about whether and how to reconstitute the movement in this new landscape of multiple Islamist actors and ideas, increasing societal Islamization, and a regime that had a vastly different orientation to Islam. Through this analysis we are reminded that one cannot fully understand the Brotherhood’s development without simultaneously examining the historical and political context in which it operated. Al-Arian’s account accomplishes this and by doing so he not only contributes to a deeper analysis of the Brotherhood but also to a richer understanding of Egyptian politics during this period.

The heart of the book is Al-Arian’s chronicle of Al-Gamaa Al-Islamiyya’s rise as the most successful Islamist student organization in the 1970s. Many of the group’s leaders would go on to leadership positions within the Muslim Brotherhood: Essam El-Erian, Abul Ela Madi, Ibrahim Al-Zaafarani, Helmi Al-Gazzar, and the group’s brightest star, Abdel Moneim Aboul Fotouh. Al-Arian introduces us to these young student activists, particularly Aboul Fotouh, and the student movement they created. He analyzes the group’s ideology and mode of operation, including its cultural and religious programs, awareness campaigns, and important summer camps. By 1977 Al-Gamaa Al-Islamiyya had become so popular that the group dominated student union elections across the country. But by the end of the decade, it found itself within the crosshairs of the regime.

Although Al-Arian tells us that the student activists and the Brotherhood both benefited from their merger, the Brotherhood arguably benefited more. Al-Gamaa Al-Islamiyya members were not allowed to join the Brotherhood as a group but were required to join individually and pledge allegiance to the general guide. The Brotherhood demanded loyalty and wanted to maintain control of its organization. The young activists who would move into senior leadership positions in the Brotherhood were ultimately unable to wrest control of the organization from its more conservative leaders, arguably with devastating consequences for both the Brotherhood and Egyptian politics. A number of student activists from this generation ultimately left the movement, like Madi and the others who founded Hizb Al-Wasat, or were marginalized or driven out, such as Aboul Fotouh. It is reasonable to suggest that the Brotherhood would have been more interested in establishing a genuinely democratic Egypt following the 2011 uprising (and less interested in dominating politics single-handedly) if leaders such as Aboul Fotouh and Madi had managed to gain control of the organization earlier.

Samer S. Shehata is associate professor of Middle Eastern politics at the Doha Institute for Graduate Studies and the University of Oklahoma. He is the author of Shop Floor Culture and Politics in Egypt; and the editor of Islamist Politics in the Middle East: Movements and Change. He has contributed to the New York Times, Boston Globe, Salon, Foreign Policy, and many other publications. 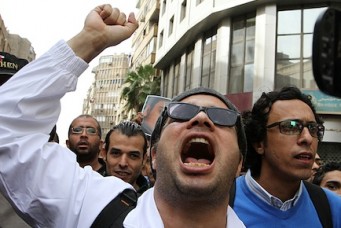 The Call of Pluralism

A Return of Violent Islamist Insurgency in Egypt? 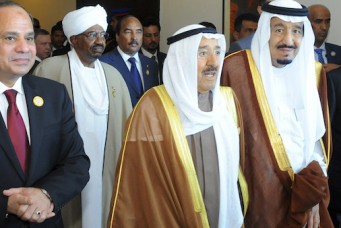 A Call for Arab Diplomacy