President Abdel Fattah El-Sisi is turning against the unions that have helped put him in power. The state has set its sights on the Egyptian Federation of Independent Trade Unions (Al-Ittihad Al-Masri Lil-Naqabat Al-Mustaqilla, EFITU), which operates as a large umbrella of non-governmental labor unions. It is looking to bring these independent unions back under the umbrella of the government-run labor union syndicate, the Egyptian Trade Union Federation (Al-Ittihad Al-‘Aam Li-Naqabat ‘Ummal Masr, ETUF), and downsize workers’ expectations for better labor rights more generally. If the protests organized by the youth, the Islamists, and the Egyptian civil society have been eliminated by the current state repression of oppositional movements, strikes and labor protests are still a matter of concern for the Egyptian authorities.

A lawsuit filed by the ETUF on the aftermath of the 2011 uprisings asking for the prohibition of the independent unions (including other small groups defending labor rights), labeled as “illegal” and “illegitimate,” was referred to the Supreme Constitutional Court in June and is expected to be discussed in the coming months. The decision, if upheld, will spell the end of non-governmental unions, one of the few remaining independent civil society actors. “Our existence is threatened by the state attempt to ban independent unionism,” said one of the EFITU’s members in Mahalla. But this will not be the end of the Egyptian labor movement.

The EFITU, which grew out of the workers’ movement during the Mahalla strikes of 2006 and was legalized by former Minister of Manpower Ahmed El-Borai in 2011, became one of the more important oppositional forces during the 2011 uprisings. “The most important achievement of the 2011 revolution seemed to be that we could have better defended workers’ rights,” one of the group’s Mahalla members added. During the interim Supreme Council of Armed Forces (SCAF) government in 2013–14, the Egyptian military initially accepted the existence of the EFITU and its place outside the existing state-controlled governmental unions (ETUF) as a way of accommodating growing left-wing opposition. But in the six elections between 2011 and 2015, the Mahalla Al-Kubra workers’ wishes to institutionalize their nascent labor movement were undermined by the military and political elite. The rushed electoral procedures did not give the local workers enough time to structure their connections to the newly formed Islamist and left-wing political parties and to institutionalize their independent committees within factories.

Still, and despite fragmentation and a lack of coherent leadership, the unions were able to lend important support to El-Sisi. Some of their more prominent leaders are serving both at the national and local levels and offering unconditional support to the El-Sisi presidency, such as Kamal Abu Eita, the former head of the Real Estate Tax Authority Union who served as Minister of Manpower until March 2014.

El-Sisi’s own rise to power took advantage of the growing opposition to the Muslim Brotherhood’s neoliberal economic policies among workers in the Nile Delta. In the period between February and March 2013, around 350 to 461 strikes and workers’ protests were taking place daily in Egypt. But even as the military hijacked this new wave of strikes toward the end of Mohamed Morsi’s presidency, the meetings of the EFITU, the Center for Trade Union And Workers’ Services, and other opposition groups began to be infiltrated by the military and the civilian secret service, who aimed to put their activities under strict state control.

Despite capitalizing on the labor movement’s opposition to Morsi to propel him to power, El-Sisi’s presidency continued a policy of state capitalism, neglecting the protesters’ requests for social justice. The government continued negotiations with the International Monetary Fund (IMF) and capped income taxes for the top bracket at 22.5 percent on March 11, 2015—all moves opposed by large segments of the labor movement. On April 28, 2015, the Supreme Administrative Court outlawed the workers’ right to strike and forced many labor officials to retire by accusing them of taking part in protests. However, upon the approval of the first draft of the Civil Service Law, workers’ mobilizations continued between August and September 2015—the largest since the army takeover. As a result, and despite the initial support some leaders of the EFITU gave to Abdel Fattah El-Sisi, workers in Mahalla were growing critical of his economic policies. “The El-Sisi political economy is the most neoliberal ever witnessed in Egypt,” one worker argued.

The government’s targeting of the EFITU and its members have—as one member put it—prevented the union from “evolving into a more structured organization.” However, the EFITU maintains support at the local level and continues to organize new strikes, as it did with a set of strikes beginning in January 2014 at Suez Steel Company factories, the Menoufiya and Mahalla Al-Kubra textile factories, the Bticino electrical equipment factory in Cairo, and the Pirelli tire factory in Alexandria. According to the Egyptian NGO Democracy Meter, there were 1,117 reported labor protests in 2015, and an additional 493 protests from January to April 2016, showing a constant high level of labor mobilizations.

Even nationally, despite increasing repression on NGOs and opposition groups, in December 2015 the EFITU held its biggest meeting since the 2013 military takeover. This was a response to the ETUF issuing a document stating its intent to oppose and marginalize the EFITU—a move seen as further evidence of the government’s intention to put the independent unions under state control. The workers discussed forming a committee to represent workers’ rights and launch a national campaign to support trade union freedoms, in addition to organizing a number of regional conferences and potential new strikes.

Despite the crackdown on the Islamists, arrests and threats to secular activists, disillusionment of the youth, and tightening space for NGOs, the EFITU is still working, organizing strikes and labor protests under the strict supervision of the state. However, increased governmental control is hindering the independence of those trade unions, transforming their activities from anti-regime workers’ movements to NGOs defending labor rights and maintaining an almost irrelevant difference with more governmental organizations. Despite the lack of space for dissent in Egypt’s military regime, unionized workers, together with left-wing and secular activists, continue their efforts—even if clandestinely—to build-up a new anti-regime movement in the spirit of the “social soul” of the 2011 uprisings.

Giuseppe Acconcia is Italian journalist and researcher focusing on the Middle East. On Twitter: @stradedellest.

Egypt’s Protests by the Numbers 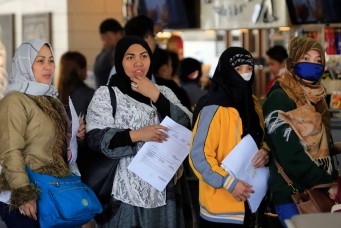