On the heels of the now hotly contested decree granting the Egyptian president unlimited authority, President Mohammed Morsi also amended the nation’s 1976 trade union law. Egypt’s independent labor movement opposes the amendment, saying it signals potential suppression of the right to freely form unions while providing Morsi’s administration with the power to bypass democratic union elections by appointing new board members of the Egyptian Trade Union Federation (ETUF), which has always been closely aligned with the state. The government’s acts have raised concerns for Egypt’s democratic transition, causing thousands of citizens to return to the streets in mass demonstrations. This amendment leaves intact “ETUF’s legal monopoly on trade union organization.”

“Morsi is clearly preparing a systematic crackdown against Egypt’s union movement, against the right to strike, against the right to organize and against union plurality,” says Fatma Ramadan, an executive board member of the Egyptian Federation of Independent Trade Unions (EFITU). The EFITU and the Egyptian Democratic Labor Congress (EDLC) have released statements regarding the amendment.

The age limit could result in the removal of many leaders from their positions, paving the way for the government to appoint their replacements. The amendment to the trade union law requires that “the next nominee in number of votes will fill his place,” however, candidates for many seats in ETUF’s 2006 elections went uncontested, leaving no runner-up. (An Egyptian court also determined the elections to befraudulent.) This will then leave a number of vacant seats available for appointment by the government, as opposed to filling the newly empty leadership positions through transparent and free elections.

In news reports, Minister of Manpower Khaled El-Azhari has said the changes are necessary to remove those affiliated to the former regime from the ETUF leadership structure and revitalize the organization with new people.  However, independent unions say the result is a continued practice by the Egyptian government of interference in union affairs, which is a clear violation of international standards. According to the EDLC in its statement, “instead of dismantling the institutions that were the cornerstones of the old regime’s system of tyranny, oppression and corruption, they are maintaining them. They are only changing their leaderships and key decision makers.”

A draft trade union law allowing for union pluralism and the right to organize independent unions was put before the Egyptian Parliament in August 2011, but was never considered for a vote.  The ILO agreed to postpone Egypt’s case in 2011 in order to give the government time to pass a new trade union law. This new amendment does not demonstrate any progress toward compliance with ILO conventions 87 and98.

The freedom to form democratic trade unions also is under siege in Egypt’s draft constitution, which does not provide a guarantee for freedom of association for workers.  Article 52 of the draft constitution, which will be voted on in a referendum on December 15, states that “The freedom to form syndicates, unions and cooperatives is a right guaranteed by law,” apparently deferring to existing legislation. In contrast, the right to form political parties and associations are guaranteed in the constitution and not subject to other legislation. Article 51 states, “Citizens have the right to establish associations and civil institutions, subject to notification only. Such institutions shall operate freely and be deemed legal persons.” Article 53 mandates that “one trade union is allowed per profession.” This limitation could result in the denial of freedom of association and sends a signal that ETUF will remain the sole trade union federation in Egypt, leaving independent unions in political limbo and unable to organize members in sectors where ETUF unions exist. Indeed, new independent unions fear the government could use the amendment to dissolve their organizations.

Independent trade unions in nascent democracies often provide one of the few balances to power. They can speak for the working people they represent—people who, alone, may be afraid to challenge the decisions that affect their lives. This amendment neither furthers the cause of a more open and pluralistic society nor does it consider the choice of workers to form new unions. And it may very well succeed in achieving what local labor leaders fear: that the new Egypt, if it suppresses workers’ voices and denies their rights, will look a lot like the old Egypt.

Erin Radford is a program officer for the Middle East and North Africa at the Solidarity Center in Washington, DC

All Unionized and Nowhere to Go 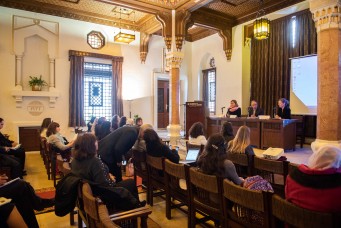