The plan, which Trump said was a last chance for Palestinians, envisages a two-state solution with Jerusalem as the undivided capital of Israel. The West Bank would not be cut in half by the holy city, Trump said, but connected to Gaza via an underground tunnel.

Israel would retain control over its settlements, considered illegal under international law, in the West Bank. The Palestinians would be allowed to declare a capital in Abu Dis, an Arab neighborhood to the east of Jerusalem and on the other side of the barrier dividing the city.

The plan also rolls back previous peace plans and accepts “facts on the ground”—Israel would retain almost all of the land it occupied since the Arab defeat of 1967; it would give up some land to make a future Palestinian state contiguous. The Palestinians would have to give up to 40 percent of the West Bank, Abbas said, a proposal the Palestinians quickly condemned and rejected.

Abbas called the Trump plan “the culmination of the Balfour Declaration” of 1917 which was a British pledge to establish “a national home for the Jewish people” in Palestine.

In the immediate aftermath of the plan being made public, “#القدس ــ ثمنها ـ دم” (Jerusalem’s price is blood), started trending on Twitter. Protests broke out in Gaza and Ramallah, heeding Abbas’ call for “300 days in the street”. In Amman, Jordanians protested one of Trump’s proposals—the potential annexation of the Jordan Valley—outside the U.S. Embassy.

Although King Abdullah II condemned the plan during its formulation—last month characterizing Israeli-Jordanian relations as “at an all-time low” and warning that an annexation of the Jordan Valley would lead to regional chaos—he shifted his tone in the past two weeks and urged the international community to see “the glass half full”.

The Jordanian Foreign Minister Ayman Safadi said his country would work with the global community and regional powers to ensure a just and lasting peace “that meets all the legitimate rights of the Palestinian people”.

In Egypt, the only other Arab state which has diplomatic relations with Israel, the response was similarly lukewarm.

“Egypt calls on both parties involved to carefully consider the U.S. vision to achieve peace and to open channels for dialogue to resume negotiations between the Palestinians and the Israelis where they can discuss their visions under U.S. patronage to reach a comprehensive and fair peace agreement that meets the aspirations and hopes of the two peoples and leads to an independent Palestinian state,” read a foreign ministry statement late Tuesday.

One of the biggest points of criticism is that the Trump plan does away with the concept of “land for peace”, as touted in previous peace plans whereby Israel trades occupied Palestinian land for a peace treaty, and replaces it with a framework which promises economic prosperity to Palestinians in exchange for a comprehensive agreement and a future state.

Nabil Fahmy, former Egyptian foreign minister and Dean of the School of Global Affairs and Public Policy at the American University in Cairo, told The New York Times that the proposal would “not only fail to bring peace to the region, but it might also scupper the chances for a lasting deal”.

“To put the proposal this way, you must want to have it rejected,” he told The New York Times.

In a summer 2019 piece for The Cairo Review Fahmy emphasized that the Trump plan suffered from fundamental flaws.

“The answer [by Arabs to the plan], simply put, is the fear that the “opportunity of the century” is actually part of the unfathomable “deal of the century,” whereby the United States attempts to convince Palestinians to forgo their national rights in exchange for economic aid, which would be shouldered mostly by wealthy states globally, and Arab states,” he wrote.

He predicted that “Arab and Muslim states will not accept any proposed solution where the Dome of the Rock will continue to be administered by Israel,” thus rendering the Trump administration’s proposal a non-starter given the highly sensitive nature of Jerusalem’s holy sites.

One particular critique which was directed at the Trump administration was that it hadn’t consulted with any Arab or Palestinian representatives in the drafting of the peace plan.

Daniel Kurtzer, who is a former U.S. ambassador to both Egypt and Israel, tweeted that the plan’s economic aspects was “written by undergraduates” and its political portion as “sophomoric.”

When Trump/Kushner released their economic plan in Bahrain, I said that, as a paper written by undergraduates, it merited a C-. I was guilty then of grade inflation. The political plan released today is sophomoric, and it is just plain stupid and dangerous. F-.

When Trump presented the plan on Tuesday, he was joined by Israeli Prime Minister Benjamin Netanyahu, but there were no Arabs or Palestinians at the podium.

This has further exacerbated criticism that the Trump plan is skewed in favor of Israel.

At a conference in Cairo on Tuesday night, Grand Imam Ahmed al-Tayeb echoed displeasure with Arab exclusion by saying he felt “embarrassed” watching Trump and Netanyahu present the plan. “Our identity as Arabs and Muslims is over,” he said. Notably, “شيخ الأزهر” was also trending on Twitter at the time of the plan’s release, highlighting Al-Azhar’s resonance with the region’s youth.

Egypt is expected to hold an emergency Arab League conference convened by Palestine in the coming days. Abbas has promised that the Trump plan will end up uniting all Palestinian factions and heal their rifts in the face of a common existential threat.

Arab League Secretary-General Ahmed Aboul Gheit told the Financial Times that an initial read of the Trump plan indicated that Palestinian rights and demands had been forfeited.

In the meantime, some in the region are blaming the United States for presenting a “misguided” peace plan they say will raise tensions in the Middle East.

The Lebanese Hezbollah group characterized the plan as a “conspiracy” that would not have been possible without the ”complicity and betrayal of a number of Arab regimes.”

Ambassadors from the United Arab Emirates, Oman, and Bahrain were among the only Middle Eastern leaders present at the plan’s presentation on Tuesday, and the UAE called it an “important starting point for a return to negotiations.” Even Qatar’s foreign ministry “appreciates the endeavors of President Trump.”

Saudi commentator Ali Shihabi, however, said that the plan was “all downside and no upside for U.S. allies in the region.”

As the Arab Gulf urges negotiations, however, Turkey and Iran posture themselves in opposition. In line with heightened Iran-United States tensions, Iranian Foreign Minister Mohammed Javad Zarif lambasted the “treason of the century” as “the dream project of a bankruptcy-ridden real estate developer.”

The so-called “Vision for Peace” is simply the dream project of a bankruptcy-ridden real estate developer.

But it is a nightmare for the region and the world

And, hopefully, a wake-up call for all the Muslims who have been barking up the wrong tree.#LetsUniteForPalestinians pic.twitter.com/j2CJ9JaH9c

Turkish officials characterized the plan as “an annexation plan,” and deemed it “stillborn”— it never had a chance at acceptance, within Palestine or the region, they said.

In the meantime, Netanyahu said he would put forward his plan to annex 30 percent of the West Bank to his cabinet this weekend. He is due to meet Russian President Vladimir Putin in Moscow on Thursday. Russian officials said they would study the Trump plan but also called on the Israelis and Palestinians to negotiate a mutually acceptable peace agreement. 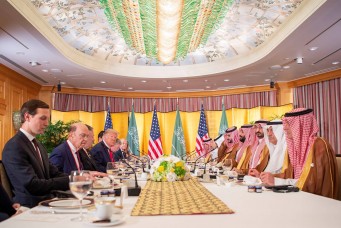 Delusions of a Deal