The diminishing role and influence of the United States in the Middle East is reflected in its inability, over the past decade, to influence the course of events in Lebanon. Since the murder of Prime Minister Rafik Hariri in 2005, U.S. policy almost exclusively consisted of to bucking up a pro-western group, the March 14 coalition. America’s two objectives were indicting Hezbollah for the murder of Hariri, and ultimately the disarmament of the group.

This single-minded attempt to weaken and corner Lebanese Hezbollah only provoked the group to further intransigence and violence, undermining local and regional attempts at reconciliation in Lebanon. Rafik Hariri’s son Saad, who became prime minister in 2009, was encouraged onto a confrontational path that resulted in the fall of his cabinet in 2011, ironically while he was in Washington visiting President Obama. Hariri lost the premiership, the confidence of his Saudi backers and the political game in Lebanon. Fearing for his own safety, he has been in a self-imposed exile from Lebanon, traveling between Paris and Riyadh for the past two years.

Since the Arab uprising season started in 2011, the Middle East has gotten more complicated (especially if you ask top U.S. policy makers). But, what is happening in the troubled region is also very simple. The social contracts that bound Arab societies together are unraveling. In most cases, the political fabrics were woven by colonial powers and/or by authoritarian rulers of one variety or another. With the uprisings, the authoritarian lid is being tossed aside, replaced, or put under severe pressure. In a rational world, influential men and women representing the variety of sectarian, ethnic and ideological groups would get together in each affected country and renegotiate the contract between them. In the real world we live in, the unraveling is leading to an existential struggle for power, with or without the fig leaf of a national dialogue. The U.S. cannot resolve all the problems of the region, but U.S. foreign policy must steer carefully with conflict management and mitigation in mind—the U.S national interest so dictates, as in Lebanon, so in the rest of the region.

Lebanon’s Syria Problem
It has become a cliché among Levant scholars that Lebanon is a microcosm of the Middle East, and therefore a key to understanding the region. True enough. In Lebanon, the impact of the Syrian war is shaking the very foundation of the Lebanese social contract, known as the Lebanese National Pact.

The national pact guaranteed, in 1943, the 17 recognized religious sects in Lebanon a place on the country’s political map—a seat, that is, at every level of government. It also consecrated a grand bargain between Christians and Muslims on the basis of which Muslims would forgo the inclination to belong to a greater Arab union or an Islamic Umma beyond Lebanon’s borders, and Christians would forgo their inclination to retreat to an exclusive pro-Western religious enclave in the mountains. In return, there would be a state every sect could call home.

On foreign policy, it was decided that any matter of national import would only be decided on the basis of consensus, or not at all.

The pact worked relatively well, at least in times of relative calm, largely between 1943 and 1975, despite a brief period of critical tension in 1958. In 1975 and again in 2005 and 2011, tensions mounted on issues that could neither be decided by consensus nor ignored. In 1975, the military presence of the Palestine Liberation Organization in Lebanon, and constant Israeli incursions against this presence, led the various groups in Lebanon to take matters into their own hands, in favor of and against the Palestinians. The fabric of the state was ripped asunder as a result, and state institutions no longer functioned as neutral agencies meant to serve all groups equally.

The current serious strife in Lebanon goes back to 2005, with the murder of Rafik Hariri and the immediate sense among the March 14 partisans that Syria and Hezbollah were behind the assassination. At least half of Lebanon rose against Syrian military presence and decried the hijacking of state institutions by Lebanese factions that supported and/or did the bidding of the Syrians in the country. In 2008, it was the turn of Hezbollah and their March 8 faction, to decry what they saw as the use of the instruments of the state against them by the majority that had won control of parliament and cabinet.

In each case, major agreements that ended the conflict referred back to the national pact in mediating between Lebanese factions: Thus, the Taif Agreement sealed a deal that ended the long civil war by amending the pact to reapportion power between the sects, making representation in parliament equal between Muslims and Christians, and recalibrating executive authority to stress the need for consensus before major decisions were taken on using the instruments of power. In a similar vein, the 2008 Doha Agreement ended internal clashes by reinforcing the national pact’s principle of consensus and preventing the majority in control of the cabinet from taking action against the security interests of Hezbollah.

The national pact is again being tested by the war going on inside Syria. With no consensus on which side to support in the Syrian conflict, each group in Lebanon is taking matters into its own hands. Since the Lebanese state institutions could be used one way or the other, these institutions are grinding to a halt over matters that may seem purely domestic but in reality reflect the impact of the regional struggle on the vital interests of the various Lebanese factions. Elections are on hold because of lack of agreement on which electoral law to use. The old 1960 law favors the March 14 grouping, an advantage which the March 8 coalition wants to eliminate, while the new proportional systems of representation being proposed may, depending on which version is applied, better reflect the rising numbers of Shia Muslims, thereby increasing the representation of Hezbollah. As a result of postponing the election, the term of the current parliament had to be extended, against the wishes of many in the March 14 coalition.  On the executive side, with no agreement on appointing a new head of the Lebanese Armed Forces, led to extending the term of the current leader, General Qahwaji, perceived by many Lebanese as too accommodating of Hezbollah and other pro-Syrian regime forces in Lebanon. A similar disagreement over the replacement of the head of the Internal Security Forces led to the resignation of the cabinet of Prime Minister Najib Mikati. The designate prime minister, Tammam Salam, has been unable to form a new government.

The Lebanese have been trained, by years of conflict, to function and go about their daily business with or without governmental institutions. The problem, however, is that the paralysis of state institutions reflects the intractable nature of the conflict between the main protagonists. In principle, there is a national dialogue forum for resolving major disagreements. Given that each side seems to consider the struggle for Syria to be an existential one, not only to the Syrian factions doing the fighting, but also to their respective Lebanese partisans, there is very little chance a reconciliation session, or any number of them, would resolve the issue. The only thing that stands in the way of another major blow-up is imbalance of power that exists between Hezbollah and the forces opposed to it. March 14 does not have the wherewithal to fight and March 8 is so dominant that it has no need to.

In sheer numbers, March 14, which includes the vast majority of Sunnis, roughly half of the Christians and the entire Druze community (at least when their leader Walid Jumblat is a willing partner) outnumber the Shia and their allies. Politically, this coalition should prevail. Lebanese realities, however, dictate a no-winner/no-loser formula, which means elections are more or less irrelevant from a policy perspective. Further, the only sect that is more or less unified in Lebanon is the Shi’ite one.

Militarily, the Sunnis, since the end of the civil war, have had no military capability. Salafi leaders emerged over the past few years and, armed with private funding from the Gulf, are attempting to fill the vacuum. The militias that have formed mainly in Tripoli to the north and Saidon in the south, are poorly organized and equipped militias and the leaders who emerged have neither the ability to sustain a long conflict nor the leadership to engage politically. They took a serious blow in the June, 2013 events in Saidon. By taking on the Lebanese Armed Forces (LAF), they discredited themselves with most Lebanese, and came up short in any case.

The Druze are too small and vulnerable, which explains Jumblat’s balancing act. The Druze have maintained a small fighting force of some stature, but this is mainly for defensive purposes and cannot sustain itself in the face of a serious onslaught.

In the face of this faltering March 14 coalition, Hezbollah stands as a solid front, socially, politically and militarily, with a several thousand strong militia equipped with sophisticated weapons capable of holding off the Israel Defense Forces, let alone any Lebanese force, to include the LAF.

U.S. Options
The U.S. has two choices in Lebanon, reflecting I would argue, similar choices in the region: support pro-Western factions or facilitate reconciliation. Continuing along the previous path in Lebanon, March 14 could be encouraged to pry Aoun’s Christians away from the March 8 coalition and, with some encouragement, new Saudi funds could be used to pump up the group. Such a course of action could only lead to the Syrian conflict spilling over into a full-fledged war in Lebanon. The other course of action would be to encourage a genuine national dialogue in Lebanon, which means an accommodation between the two main groups. This parallels the alternate scenarios in Syria: an ultimate accommodation between the warring Syrian communities, or a struggle to the bitter end.

In Lebanon and Syria, the Iran-Saudi Arabia conflict reigns supreme. With or without a strike on Syria, a grand bargain between the U.S. and Iran would hold the key to any regional reconciliation. A very unlikely happy ending, it would seem under current circumstances. The alternative however is an all-out war which, unfortunately in the Middle East, is always an option.

Nabeel Khoury is Senior Fellow for Middle East and National Security at the Chicago Council on Global Affairs. He previously served as Deputy Chief of Mission in Yemen (2004-2007), Deputy Director of the Media Outreach Centre in London (2002-2004), and Consul General in Morocco (1998-2002). In 2003, during the Iraq war, he served as Department spokesperson at U.S. Central Command in Doha and in Baghdad. 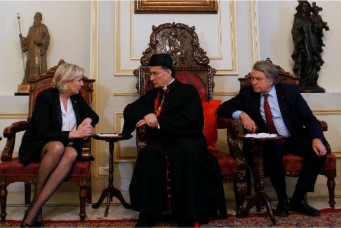