President Donald Trump’s positive signals to Egypt and its leader, President Abdel Fattah El-Sisi, have made many Egyptians hopeful that the United States will adopt a more constructive approach to Egypt and more effective policies for the region’s problems. The upcoming meeting between the two presidents is a reminder of Egypt’s critical importance to stability in the Middle East, which remains an American vital strategic interest. With Arab leaders holding a summit in Amman on March 29 to address the region’s crises, El-Sisi’s visit to the White House is well-timed to begin rebuilding the close Egyptian-American partnership.

The turmoil in the Middle East after the Arab uprisings in 2011 left Egyptians anxious about their future. Egypt lost much of its weight after 2011 for multiple internal and external reasons as the Arab Spring unleashed disorganization and political void. An uprising fatigue coupled with confusion and incoherence in its domestic situation, and a near collapse of its economy, weakened Egypt. In addition, the changing regional power equilibrium tilted towards more aggressive emerging regional powers, namely Iran and Turkey.

The ouster of the Muslim Brotherhood and President El-Sisi’s election as president in 2014 have put Egypt on course towards domestic stability, allowing it to resume its positive role in the region, and repair its strategic partnership with Washington. Unfortunately, the removal of the Muslim Brotherhood government from power on July 3, 2013, which responded to the will of Egypt’s majority, created tensions in Egyptian-American relations. President Barack Obama stoked Egyptian misgivings about U.S. intentions when he temporarily suspended some forms of military aid. Washington delayed the delivery of F-16 aircraft, M1A1 Abrams tank parts, and Apache helicopters, which Egypt had described as essential in its war against terrorism. This infuriated the Egyptian leadership, which resented Washington’s coolness against what they saw as a popular uprising against the Muslim Brotherhood regime.

President El-Sisi’s role as a force for stability in the Middle East should need no introduction for the new U.S. administration. El-Sisi can point to a wealth of achievements at the domestic level, including pushing through a raft of difficult economic reforms, such as floating Egypt’s currency in order to attract new investments. Across the Arab World, the Egyptian president is seen as a stalwart against violent Islamist movements. President Trump has identified destroying the Islamic State in Iraq and Syria (ISIS) as a top priority of his administration’s foreign policy. This is no less a priority for El-Sisi’s government, which is waging a costly counterinsurgency against ISIS extremists in Egypt’s northern Sinai Peninsula. This should be all the more reason for the Trump administration to put its trust in Egypt’s leadership, and help the country toward recovering its influence.

A strong Egypt, allied with the United States, can play a transformational role in stabilizing the Middle East—as it has repeatedly in the past. In 1977, President Anwar Sadat’s historic visit to Jerusalem, and the Camp David peace accords a year later, broke the Arab taboo against recognizing Israel. In 1991, President Hosni Mubarak, who opposed Saddam Hussein’s invasion of Kuwait, led Arab states into a military coalition with the United States and other countries to end Iraq’s occupation. After September 11, 2001, Egypt wisely counseled against invading and occupying Iraq, but stood firmly alongside the United States in the war against extremism.

Egyptian diplomacy can provide valuable leadership in a broader Middle East bereft of regional partners. In Libya, where civil war has followed the overthrow of longtime leader Muammar Gaddafi, Egypt is leading efforts to stabilize the country under a single national government. Egyptian diplomats have brought rival Libyan leaders together for meetings in Cairo. In February, representatives of the United Nations-backed government of Prime Minister Fayez Serraj and the military leader General Khalifa Haftar agreed on an Egyptian-brokered roadmap towards national reconciliation, and new elections in a year’s time.

Egypt, whose capital has long been the headquarters of the Arab League, consistently stands as a strong voice for Arab pragmatism and moderation. In contrast to Iran and Turkey, which have militarily interfered in the region’s wars, Egypt has preferred diplomacy, mediation, and supporting the integrity of national and historical borders. President El-Sisi has been outspokenly opposed to altering the borders of Syria or Iraq—sage counsel at a time when the United States and other powers are beginning to consider the post-ISIS future of these countries. In the competition for hearts and minds, Egypt is also a leader when it comes to moderate Islam. Cairo is home to Al Azhar, the 1,000-year-old center of Islamic learning that remains the authoritative reference for Sunni Muslims around the world. El-Sisi has urged Al Azhar to restructure its message, and emphasize a more rational interpretation of Islam that dissociates public religious discourse from radical and violent movements.

President Trump has spoken forcefully about his desire to be the American leader who negotiates an end to the nearly 70-year-old Israeli-Palestinian conflict. In mediating between the two sides, Egypt has no equal in the region, with years of direct diplomatic involvement with both Israelis and Palestinians. Egypt and Israel continue to cooperate successfully in the Sinai, including on intelligence sharing, counterterrorism operations, and fighting ISIS. Yet Egypt remains a staunch supporter of Palestinian rights and a future independent, Palestinian state. It is perhaps the only country in the region with a working and, relatively trusting diplomatic relationship with both Tel Aviv and the Palestinian Authority.

For the Trump administration, intent on bringing stability to the Middle East with the least cost in American blood and treasure, the turmoil that gripped Egypt from 2011 to 2013 should be a reminder of the need to strongly support President El-Sisi’s efforts towards reestablishing a stable and prosperous future. As the largest Arab nation, with a population of 90 million people, and with a historical and geopolitical weight unmatched by any other Arab power, Egypt has the strategic weight to be a responsible and stable partner for peace in a troubled region.

Magda Shahin, a former Egyptian ambassador, is director of the Prince Alwaleed Bin Talal Bin Abdul Aziz Alsaud Center for American Studies and Research at the American University in Cairo

Will Trump and El-Sisi Avert a Proven Disaster? 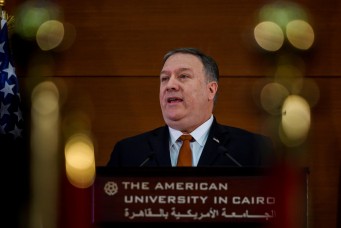