Nearly ten years after President Barack Obama’s landmark 2009 Cairo speech “A New Beginning,” U.S. Secretary of State Mike Pompeo delivered a scathing recast of what the Donald Trump administration envisions as America’s role in the Middle East, citing this approach as “the real new beginning.” On January 10, Pompeo spoke to a select audience of university faculty, diplomats, and leading Egyptian figures at the American University in Cairo (AUC), decreeing that “the age of self-inflicted American shame is over” and that the United States will push forward with a more active foreign policy in the region.

Pompeo made assertive statements about writing a new U.S. playbook—containing Iran, eradicating terrorism, and guaranteeing Israeli security—but remained unclear on the future of Syria and Palestine, as well as the overall nature of U.S. involvement in the Middle East.

Obama’s dire misjudgments, according to Pompeo, and reluctance to take an interventionist stance in Middle East conflicts between 2009 and 2017 were informed by the United States’ history of involvement in several wars in the region. Unfortunately, this led the Obama White House to underestimate the true power and widespread dominance of the Islamic State in Iraq and Syria (ISIS), he argued. The secretary also described Obama’s overtures toward Iran as “wishful thinking” which ultimately caused the former president to strike an ill-advised nuclear deal with Tehran. It also allowed the Iranians to increase their foothold in Yemen, Iraq, Syria, and Lebanon.

In contrast to Obama’s decisions, Pompeo cast Trump as a fighter who has joined forces with the Egyptian leadership and other allies to “meet history’s great test: to conquer extremism and vanquish the forces of terrorism.” Pompeo went on to declare the United States a “force for good,” casting the United States in the role of a benevolent power in the Middle East.

“We’ve never dreamed of domination in the Middle East. Can you say the same about Iran? [. . .] We assembled a coalition to liberate Kuwait from Saddam Hussein. Would the Russians or Chinese come to your rescue in the same way, the way that we have?” America’s diplomat posited.

To dispel fears about American power and ambitions in exercising dominance in the region, Pompeo explained that the United States is “a liberating force, not an occupying power.” He discussed Trump’s contentious decision to withdraw U.S. troops from Syria in December 2018 saying, “This isn’t a change of mission. We remain committed to the complete dismantling of ISIS—the ISIS threat— and the ongoing fight against radical Islamism in all of its forms. But as President Trump has said, we’re looking to our partners to do more, and in this effort we will do so going forward together.”

Pompeo explained that U.S. actions to block ISIS from reemerging are exemplified by the $2.5 billion in U.S. humanitarian assistance to Iraq since 2014, and close to $30 billion in aid to support Iraq’s reconstruction pledged at the February 2018 Kuwait Reconstruction Conference.

As expected, much of the secretary’s speech was directed at Iran. Pompeo said the United States missed a chance to undermine the Iranian regime during the Green Revolution and compounded this mistake by signing the 2015 Joint Comprehensive Plan of Action with Iran.

In contrast, Pompeo stressed Trump’s successes in undermining Iran, such as re-imposing sanctions and working with regional partners to “counteract the Iran regime’s revolutionary agenda.” These actions have elicited much support across the region, he added. “Nations are rallying to our side to confront the regime like never before. Egypt, Oman, Kuwait, and Jordan have all been instrumental in thwarting Iran’s efforts to evade sanctions.” Pompeo went on to commend all U.S. allies who have pushed back against Iranian actions in the Middle East and underscored that all nations must seek to contain “the full array of the regime’s malign activity.”

Pompeo praised Egyptian President Abdel Fattah El-Sisi and Egypt’s fight against ISIS in the Sinai Peninsula. The secretary also lauded examples in Egypt of religious coexistence, underscoring the work of El-Sisi to promote religious freedom, which he cited as “an example for all leaders and peoples of the Middle East.”

Finally, Pompeo acknowledged that some have criticized the United States in the past as having done too little or too much in the Middle East. In spite of that criticism, Pompeo called on his AUC audience to “just look around you at this university, which has existed now for a century [. . .] These are symbols of America’s innate goodness, of our hopes for you, and of the better future we desire for all nations of the Middle East.” 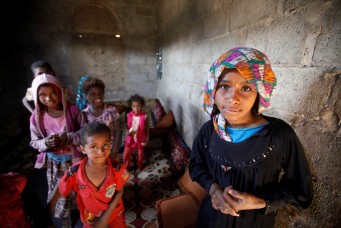 Are Vicious Islamists the Real Issue?

The Real Scare in Syria Is Not Chemical Weapon