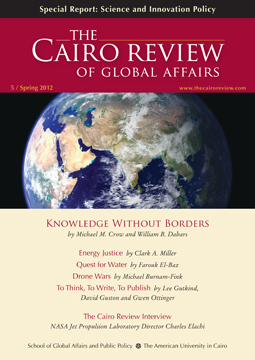 Candidates in the 2012 Egyptian Presidential Election.

To Think, To Write, To Publish

By David Guston and Gwen Ottinger and Lee Gutkind

Global challenges related to technology demand attention to their social and ethical aspects and not only their tec hnical ones. but Science and Innovation Policy is not easy to get across to the gener al public. A solution: communicating policy through the genre of creative nonfiction.

Political unrest after a disputed presidential election in Kenya left some eleven hundred people dead and three hundred thousand other homeless. But the turmoil also inflicted damage on the country’s knowledge system—the universities and research institutes that generate economic progress and are a key to strengthening democracy against ethnic-based politics.

Conventional wisdom says that the issue of climate change is too complex and technical for ordinary people to grasp but a project called World Wide Views on Global Warming brought together four thousand citizens in thirty-eight countries who demonstrated a keen ability to debate the topic and make policy recommendations.

As Egyptians prepare to vote in the first presidential election since the end of Hosni Mubarak’s regime, the old aphorism comes to mind: “Every nation has the government it deserves.” Egypt seems to be getting the presidential election it deserves—one reflecting the social and institutional weaknesses that have plagued the country for too long. There is confusion, suspicion, polarization. Conspiracy theories abound. And there is the mounting anxiety over the economy and public security. Increasingly, it seems, nervous citizens are pining for the stability—or at least the predictability—of Mubarak’s three decades in power.

By Michael M. Crow and William B. Dabars

American research universities are the envy of the world, but they must adapt if they are to create kno wledge that responds to the ‘grand challenges’ of our epoch. Only an amalgamation of transdisciplinary, transinstitutional, and transnational frameworks has the potential to advance broader social and economic outcomes.

By Clark A. Miller

In the coming fifty years, choices will be made about what kinds of energy systems to build for the future, where to build them, and how to distribute their benefits, costs, and risks. These choices will help determine which countries and communities flourish and which deteriorate. The fight is on.

The Middle East is among the driest areas on Earth. Actually, it has plenty of water but much of it lies underground and unexplored. Go vernments in the region must undertake serious efforts to map ground water basins and aquifers and develop regulations for their use.

The Indian government launched an ambitious plan to expand atomic energy output seven-fold by the year 2022. But a surprising grassroots movement has sprung up to challenge the program. Rather than focusing on worries about cataclysmic accidents, it is emphasizing citizen rights and government accountability.

Meet the Predator, the unmanned attack aircraft that is defining warfare in the post-Cold War era. Initially deemed useless by the Pentagon and Central Intelligence Agency, it has become America’s weapon of choice in the War on Terror. With the creation of a new military bureaucracy dependent on identifying and striking new enemies, will Predator missions ever end?

To Mars and Beyond

Charles Elachi, director of NASA’s Jet Propulsion Laboratory, leads an institution long in the forefront of man’s exploration of the universe. He speaks with Managing Editor Scott MacLeod about his upcoming search for life on Mars, the future of the U.S. space program, the need for investment in Middle East education, and what happens when a space explorer and an actor from Star Trek have dinner together.

By Marc Rauch and Richard Tutwiler

Of all the countries in the Arab world, Egypt may be the most vulnerable to global warming. The rising sea level predicted by climate change models threatens to flood large swaths of the Nile Delta, Egypt’s breadbasket, undermining Egypt’s food security and threatening the livelihoods of millions of agricultural workers. Key population centers are also at risk, most notably the city of Alexandria.

With two billion Internet users and another two billion mobile phone users worldwide, information and ideas flow across borders as never before. Needless to say, this is prompting greater debate over freedom of expression.

One often thinks of science in terms of its economic benefits. It is also important to look at how science and particularly technology has affected concepts like the balance of power.

What is a revolutionary foreign policy? Egyptian Foreign Minister Mohamed Kamel Amr provided a broad sketch during a talk in March at the American University in Cairo. With a battery of foreign ambassadors listening attentively from the front rows, Amr spoke reassuringly of continuity. Egypt’s foreign policy, he noted, has seen no dramatic changes since former President Hosni Mubarak was toppled in the January 25, 2011, revolution.