Prime Minister Nawaz Sharif of Pakistan was one of the leaders of fifty-five Muslim-majority nations attending an anti-extremism summit in Riyadh. So how is Pakistan addressing what President Donald Trump’s speech to the gathering called “the crisis of Islamic extremism and the Islamist and Islamic terror of all kinds”?

Sharif has spent the last several months reaching out to his country’s religious minorities. In March, at an event in Karachi celebrating the Hindu festival of Holi heralding the arrival of spring, he said that “Pakistan was not made so that one religion can dominate over others.” It was a remarkable statement, because it flies in the face of Pakistan’s history, its laws, and the state’s policies privileging Islam and Muslims at the expense of religious minorities.

Sharif does not invoke secularism when he talks about religious minorities. He calls on Islam to argue for the equality of religious communities. In a January speech at the Katas Raj temples in Punjab, Sharif said that the Prophet Mohammed had declared religious minorities “one nation” with Muslims. The prime minister’s choice of words appeared to be a jab at Pakistan’s founding “two-nation theory” that Hindus and Muslims are fundamentally incompatible because they are two nations—thus creating the need for a Muslim state, Pakistan, alongside Hindu-majority India.

In Pakistan, Sharif’s outreach to religious minorities is unusual, and part of an unmistakable and concerted effort. It is partly driven by the desire to improve the country’s image abroad, one badly marred by terror and extremism. In December 2016, the prime minister launched a festive Christmas train from Islamabad. Also in December, Sharif took actions to recognize Pakistan’s first Nobel laureate, the physicist Abdus Salam, a man hitherto sidelined in Pakistan because he belonged to the Ahmadi religious minority. The government, despite significant popular anti-Ahmadi sentiment, renamed the National Physics Center after Abdus Salam almost two decades after his death.

These cannot be steps taken for political expediency, especially before an election year; they will likely harm Sharif’s poll numbers with his relatively conservative base. Yet there might still be an opportunistic motivation. He has been embroiled in court cases alleging corruption after the Panama Papers leak last year revealed his family’s considerable, unexplained assets. In April, the Supreme Court delivered a verdict narrowly ruling that Sharif could stay in power, but ordered the formation of a special commission to continue investigating the allegations. Sharif has resisted calls for his resignation. Cultivating a tolerant image may be the prime minister’s attempt to curry favor with his Western allies for political preservation, given his precarious situation at home.

Whatever his motivation, Sharif is trying to recast himself as a progressive leader, repeatedly invoking Pakistan’s founder Muhammad Ali Jinnah and his vision for the country. Liberals argue that Jinnah wanted Pakistan to be a Muslim-majority country, not an Islamic nation. Sharif does not, and won’t ever, go so far as to mention secularism; he is limited to emulating Jinnah’s reputation as the benign “protector general of minorities.”

But speeches addressing minorities, while welcome, won’t accomplish much. Mob and vigilante violence against those accused of blasphemy continues. On April 15, Mashal Khan, a 23-year-old university student, was killed for alleged blasphemy by a frenzied mob of his fellow students on campus. There have been multiple such incidents recently. Pakistan’s blasphemy laws are often misused to settle personal scores; the legal punishment for blasphemy is death. Religious minorities are particularly vulnerable to allegations of blasphemy. Whether on social media or in the streets, the media and politically powerful conservatives often conflate secular dissent with blasphemy. Sharif’s progressive words on minorities appear to be mere lip service in the face of this negative trend.

Terrorism continues, too. In 2017, the Taliban in Pakistan has displayed a renewed brazenness and capacity, while the Islamic State in Iraq and Syria (ISIS) has repeatedly reared its head in the country in recent months. Since February, the thriving city of Lahore, the capital of Punjab, has suffered repeated terrorist attacks. In Sindh, ISIS claimed a suicide bomber attack on the historic Sufi shrine of Sehwan Sharif, which killed more than eighty people as they joined together in a devotional dance called dhamaal.

The narrative on terrorism and extremism put forth by the prime minister and the broader Pakistani state remains one-dimensional, skin-deep, and obfuscating. Pakistan’s leaders do not even call the terrorist groups that target its citizens by name; they refer to them obliquely as those who sow chaos, and those who seek to destabilize the country. The strategy is often to blame other countries, notably Pakistan’s neighbors Afghanistan and India, for sponsoring terrorism within Pakistan to these ends.

Until Sharif demonstrates an introspective approach on extremism, countering it will prove elusive. At this point the fight against extremism in Pakistan has come to be embodied in the National Action Plan, a twenty-point list the government released after the 2014 Peshawar school attack. The “plan” combines anti-extremism and counterterrorism policy, and mixes goals and outcomes with actions. On the list are such measures as reinstating the death penalty for terrorists and strengthening Pakistan’s counterterrorism authority, combined with soft measures such as eliminating religious persecution, regulating madrasas, eliminating hate literature, and ending the glorification of terrorists.

Yet the twenty points of the National Action Plan fail to acknowledge the state’s own culpability in fostering extremism. If Pakistan is to move past extremism, it needs to address how the state has allowed fundamentalist interpretations of Islam to thrive in the country. Pakistan, officially an “Islamic Republic” since 1956, needs a national process of reconciliation that directly counters its historical demons. It needs to confront how the very ideology of jihad that it considers useful while fighting India over Kashmir has created the extremists that attack the Pakistani state. If Sharif means what he says, he must follow his welcome words with a wider narrative and action.

Madiha Afzal is an assistant professor at the University of Maryland School of Public Policy and a nonresident fellow at the Brookings Institution. On Twitter: @MadihaAfzal. 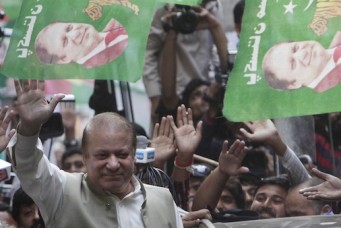