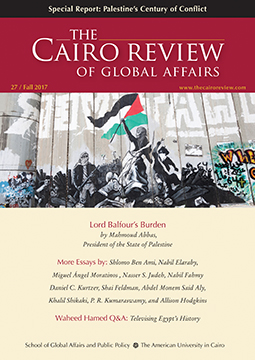 The film Eshtebak causes an uproar in Egypt.

By Elena Habersky and Jessie Steinhauer

Happenings, speakers, and events at the American University in Cairo in Fall 2017.

Anthropologist Fadwa El Guindi remembers her start at AUC, and how she discovered Nubia.

Waheed Hamed is a screenwriter with an anti-Islamist mission. His films, television and radio dramas have tracked the transformation of Egyptian culture and society over the past half-century. He speaks to Cairo Review Associate Editor Nadeen Shaker about the state of Egyptian cinema and television today.

Sectarian violence in the Arab and Muslim worlds is exacerbated by the role foreign powers play in the region, as well as local power rivalries.

From Russia, With Fear

How did Putin’s regime of fear and paranoia push Russia toward a new confrontation with the West?

Jerusalem and its Holy Sites

Timeline of the struggle over Jerusalem and its holy sites since 70 AD.

A century ago, the Balfour Declaration paved the way for the creation of a Jewish homeland in Palestine. The President of the State of Palestine asks the United Kingdom’s government to apologize for a document that set off a century of suffering and dispossession for the Palestinian people.

Israel at a Crossroads

Israel’s occupation of the West bank raises the question of whether the Jewish state wants peace.  Fifty years later, apartheid policies pose a threat not only to the future of the Palestinian people, but also of Israeli democracy.

Palestine and the Law of Nations

The United nations holds a “sacred trust” to establish Palestinian statehood and independence. Yet repeated failures to enforce decisions against Israel’s occupation have shaken the credibility of international law and the universal human rights it upholds.

A European Call for Palestinian Independence

Europe’s role in the Middle East has evolved from colonial overlord into a partner for peace between Jews and Arabs. European leaders should no longer delay in showing equal respect to Palestinian and Israeli national aspirations: they should recognize Palestinian statehood now.

The Arab World should accept responsibility for its leading role in achieving peace in Palestine, but global leaders should remember that the “Palestinian question” remains central to both regional and international relations.

Arab leaders are confronted by the peace process’ legacy of failure. Today, they face the urgent task of achieving a two-state solution before it is too late.

For decades, the United States has billed itself as an “honest broker” in the Palestinian-Israeli peace talks. Ten principles for renewing confidence in U.S. leadership, and the Arab-Israeli peace process.

By Khalil Shikaki and Shai Feldman

President Donald Trump has boasted “We will get this done” on peace in the Middle East. Negotiations between wary Israeli and Palestinian leaders might need a provocative jolt in order to stop the slide toward a “one-state reality.”

A Century’s Legacy of Conflict

Understanding the lessons of a conflict deeply steeped in history is essential to resolving it. The strength of facts on the ground, the futility of “might makes right,” and the Palestinian-Israeli conflict’s persistent role in the region’s instability are all part of a legacy that must be acknowledged to achieve peace.

Peace versus the People

Palestinian and Israeli leaders could never reach an agreement on a permanent peace settlement. But what do public opinion surveys reveal about popular, and increasingly ambivalent, support for the peace process’ promised two-state solution among Palestinians and Israelis?

Narendra Modi was the first Indian prime minister to visit the Jewish state. Now India, Asia’s rising giant, is stuck between a rock and a hard place: caught at once between its historical support for the Palestinian cause, and its rapidly growing business and technology relations with Israel.

Beyond “Land for Peace”

Peace negotiations between Palestinians and Israelis in the last quarter-century were never designed to support the establishment of a two-state solution. Brokers of the conflict should look beyond the “land for peace” formula and return to some of the finer details of UN General Assembly Resolution 181 on the partition of Palestine.