The “sectarian” Middle East does not simply exist; it is imagined to exist, and then it is produced. It does not emerge latently. Yet the strong association of the pejorative term “sectarianism” with the Middle East repeatedly suggests that the region is more negatively religious than the “secular” West. This is an ideological assumption woven into how the Arab and Muslim worlds are generally depicted as having fundamentally religious landscapes in contrast to Western societies. Not only does this assumption gloss over how religious the West is, but it also pretends that what is occurring in the Middle East reflects an unbroken arc of sectarian sentiment that connects the medieval to the modern.

Modern politics, in short, is transformed into little more than a re-enactment of a medieval drama between Sunni and Shia, rather than being a geopolitical struggle in which Western states are deeply implicated. Most of all, this Western fixation with the allegedly medieval and fixed nature of religiosity in the Middle East distracts scholars and the general public from understanding the modern roots of the “sectarian” Middle East.

One ought to discuss sectarian outlooks, actions, and thoughts in the Middle East in a manner similar to how one would talk about racial (and racist) outlooks, actions, and thoughts in the United States. Scholars of American history have gone to great lengths to challenge the notion of singular, age-old racial identifications, whether black or white. It is incumbent upon scholars of the Middle East to likewise reject the facile, monolithic, and ahistorical interpretations of sectarian identity so beloved by academics, pundits, think tank “experts,” and politicians.

The idea of an innately sectarian Middle East or Islam often serves to absolve Western powers from their complicity in creating, encouraging, or exacerbating violent political sectarianism in the Arab World. U.S. President Barack Obama, for example, asserted in 2016 that “the only organizing principles [in the region] are sectarian” and that the conflicts that rage in the Middle East under America’s watch “date back millennia.”

These assertions, at least as recounted by journalist Jeffrey Goldberg in “The Obama Doctrine” in The Atlantic, are both preposterous and self-serving—preposterous because they discount the rich history of the Arab World that underscores the numerous social and political bonds in the region that are manifestly not sectarian; self-serving because they affirm an imperial self-righteousness that presumes that the problems of the Arab World are primarily due to the persistence of allegedly immutable sectarian solidarities. The essence of Obama’s message appears to be, “We have tried to help them, but they are hopeless.”

Indisputably, there is a sectarian problem in the Middle East. This problem is tied to religion, history, region, environment, class, politics and political economy. However, it is also abundantly clear that Western interventionism in the region not only exacerbates these internal problems, but creates new conditions and contexts that define the very nature of what is “internal.” Thus, then-Secretary of State Condoleezza Rice declared confidently in 2006, amidst Israel’s devastating U.S.-backed assault on Lebanon, that the world was observing the “birth pangs of a new Middle East.” The aftermath of the U.S. invasion of Iraq in 2003, moreover, witnessed not only the destruction of what remained of the brutal Baathist Iraqi central state; it also created a new Iraqi Governing Council along explicitly sectarian lines. This fateful decision to divide the Iraqi state among “Sunni,” “Shiite,” and “Kurd” was not predetermined objectively by the diversity of Iraqi society. It was principally a U.S. imperial interpretation of this diversity around which Iraqis both rallied and resisted.

I am not suggesting that we think of sectarianism as only, or even primarily, a question of colonial “divide and rule.” Local and regional actors do indeed play the sectarian game willingly and ably. The current rivalry and proxy wars between Saudi Arabia and Iran, for example, clearly suggest regional political catalysts for the current sectarianization of the Middle East. This is as evident in Syria as it is in Yemen and Bahrain. Until another major geo-political shift occurs, sectarianized identities will surely remain firmly in place. But I am saying that we should stop pretending that the so-called “internal” dimensions have not themselves been massively affected, exacerbated, and even transformed by the West.

Rather than assume sectarianism to be a fixed, stable reality that floats above history, it is far more important to locate and identify—to historicize—each so-called “sectarian” event, moment, structure, identification, and discourse in its particular context.

This article is adapted from a report published by the James A. Baker III Institute for Public Policy. It can be accessed online here.

Ussama Makdisi is Professor of History and Arab-American Educational Foundation in Arab Studies at Rice University. 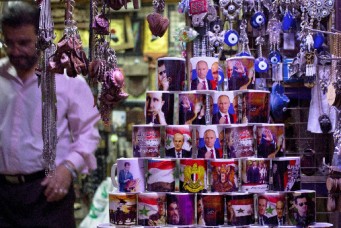 Sectarianism and the New Shiism

Local Sentiments, As Always, Will Shape The Middle East