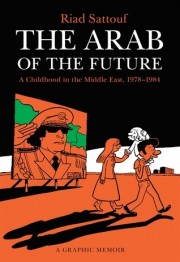 Once considered fodder for children, comics have officially arrived. The journey from low art to legitimate literature has been underway for decades, with milestones such as Art Spiegelman’s 1992 Pulitzer Prize for Maus, the budding of comics journalism as exemplified by Joe Sacco, and an emerging body of scholarship about comic art. The Paris Review recognized the turn with its introduction of The Art of Comics, using its signature interview platform to feature comic innovators R. Crumb in 2010 and Chris Ware in 2014.

Yet, even as illustrated narratives break away from their childish roots, the child still figures prominently in graphic literature. This is a global trend, and a preponderance of comic memoirs written for adult audiences grapple with fraught childhoods. In Persepolis, published in 2000, Marjane Satrapi shared her bildungsroman of Iran amid the Islamic Revolution. In Fun Home in 2006, Alison Bechdel rendered a childhood of discomfort and her undertaker father’s closeted homosexuality. In comics, the child represents an important figure for their capacity to tell truth, unfettered by taboos, uninhibited by societal rules.

The graphic memoir by the Franco-Syrian artist Riad Sattouf, The Arab of the Future, raises difficult questions about the future of the Middle East and Europe at a time of heightened conflict between nation states and the Islamic State in Iraq and Syria (ISIS). A morose treatment of a multicultural childhood in Libya, Syria, and France, The Arab of the Future is the first of a projected four-volume series, which has just been translated into English as well as fourteen other languages. The book has sold two hundred thousand copies in France and and won the 2015 Le Fauve d’or du meilleur album at the Festival d’Angoulême, France’s preeminent comic jamboree. (Angoulême nominated Sattouf’s second volume for the 2016 prize, but he withdrew citing the jury’s sexism: of the thirty nominees, not a single woman made the list.)

By portraying the dark moments of his upbringing, Sattouf has started new conversations about Arab identity in France as well as across the Arab region. In the New Yorker, Adam Shatz called him “the Arab of the present,” noting that the book resonates for anyone weaned under an authoritarian regime where the banality of state control, from censorship to food rations, shapes daily life. For that very reason, some Arab comic artists have criticized the volume for being anti-Arab. “I’m angered to read this comic,” said Lena Merhej of the Lebanese comic collective Samandal. “Everybody in his comics that is Arab is violent.” It is noteworthy that a graphic memoir has spurred such debate, but perhaps the approachability of the literary medium lends itself to self-reflection and new inquiry.

Sattouf, 37, has contributed to the French satirical weekly Charlie Hebdo, which was firebombed in November 2011 and stormed by Islamic terrorists in a January 2015 massacre that left eleven cartoonists and others dead. The pretext for the assaults on Charlie Hebdo was the caricature of the Prophet Mohammed, deemed a grave insult in Islam and among the troublemaking publication’s stock-in-state. Sattouf’s work, however, has mostly dealt with social and cultural issues, not the bellicose gags for which the comic publication is notorious. His weekly series, “The Secret Life of the Young,” captures conversations overheard between youths on subway trains and other public spaces across the French capital.

Paging through the first volume of Sattouf’s memoirs, the reader encounters vignettes of Sattouf’s turbulent childhood. Muammar Gadhafi is on TV, Hafez Al-Assad is on billboards, and, in every chapter, high politics enter daily life. Throughout, the blond-haired Riad, young, naïve, and out of place in the Middle East, offers a matter-of-fact critique of politics, however unwittingly. His Syrian father, a boisterous pan-Arabist who has faith in the region’s dictators, brings the family to Libya and later Syria, much to the chagrin of his French mother, who struggles to adjust Riad and his younger brother to life in the Middle East. Upon arrival in the village where his father was born, the author’s Syrian cousins deride the youngster a Jew—though none of them had ever met a Jew. In the process, the reader gets a view of anti-Semitism, told in a child’s voice, without the author’s judgment or commentary. The method of a child’s narration forces the reader to consider the most troublesome aspects of life in a Syrian backwater.

Somehow Sattouf re-experiences the pain of a difficult childhood without any bitterness. There is nothing funny about his catching a virus in that village outside Homs, where antibiotics are nowhere to be found. Yet an extended fever dream sequence makes the plotline tolerable if not enjoyable. While reading these gloomy memories, I often found myself laughing out loud. Not only does Sattouf pack a powerful punch line on almost every page, he often labels objects in the comics’ frame in flowery cursive to add an additional laugh. In Libya, state food rations consist of weeks of bananas. When young Riad gleefully scarfs bananas, the fruit that his parents by now detest is labeled “delicious.” In the next frame, where he looks like he is about to vomit, it reads: “Mesmerized by the taste.”

Sattouf shows the power of alternative modes of history. Neither history books nor straight reportage capture the banal aspects of life under Gadhafi or how Syrian kids apply what they have learned from television and parents in the schoolyard, like when the teens brutally slaughter a neighborhood dog. On other days, they play with toy soldiers—Syrians versus Israelis—or toy guns.

State policies of violence trickle down to the lives of youth, and through the volume’s succession of scenes, one can begin to think through the broader circumstances of ISIS’ rise. For instance, on a shopping trip to Homs, the nearest city to the village, the young Sattouf witnesses a public hanging. We do not hear the child’s inner monologue or the author’s current reflections, but rather the father’s reasoning for state terror. “That’s life… it’s horrible but it’s necessary. It sets an example. This way people stay peaceful and law abiding. You have to frighten them…”

When interviewed, Sattouf is glib about his antipathy for nationalism, religion, and politics. He told National Public Radio that, more than Syrian or French, he identifies as a “comic book author—it’s my first nationality.” (Indeed his comic art is stunning, with humorous caricatures and a sophisticated sequencing of panels that propel the plot’s movement.) He is also ambiguous about the boundaries of truth in his story and flippant about the book’s political message. Sattouf told the New Yorker that he wanted to “convey the ignorance of childhood.” So when Hafez Al-Assad is discussed, there is no footnote about his son Bashar, Syria’s current ruler, or the ongoing civil war. In the second volume, L’Arabe du futur: Une jeunesse au Moyen-Orient, 1984–1985, published in French in 2015, the author does not hint at the ancient city Palmyra’s future wreckage at the hands of ISIS. The book is strictly written from memory, not through reference books. To be sure, the book was penned prior to ISIS’ escalation of the Syrian civil war. But Sattouf sticks to recollections and offers no introduction or context. The result is a look toward a past era in Syria, Libya, and France, without projecting contemporary anxieties and avoiding nostalgia.

But, in a book that is all about that past, what does Sattouf mean by the title, The Arab of the Future? The answer is found on the penultimate page, where his family is in France on summer holiday. They take a boat to Saint-Malo, the French port city, where his father withdraws thousands of U.S. dollars. “I know the last year in Syria was hard,” says his father, “but everything will be better now.” The boy is devastated. “We’re going back to Syria?” Riad yelps. “Of course,” replies his father. “The summer’s nearly over… You can’t spend your whole life on vacation! The Arab of the Future goes to school.” Which is to say that the Arab of the Future cannot remain a child forever and has to become an adult. The second volume of Sattouf’s memoir is set in Syria, where he finally goes to school.

Telling the story from a child’s point of view is not just a tactic of cuteness, but an approach that challenges the biases that adults hold dear. Childhood memoirs might be said to be a way of working through childhood angst, basically an illustrated version of the psychiatric couch. But in reading Sattouf’s search for clarity about the past, I also thought of the writer and theorist Walter Benjamin’s Berlin Childhood around 1900, a series of fragmented memories of youth. “In 1932, when I was abroad, it began to be clear to me that I would soon have to bid a long, perhaps lasting farewell to the city of my birth,” he writes in the memoir’s introduction. “I deliberately called to mind those images which, in exile, are most apt to waken homesickness: images of childhood.” Like a comic memoir, Benjamin’s recollection relies on painting specific images—objects, rooms, family members—and leaves it to the reader to piece them together.

To write about the past is to finally part with it, to find meaning in it, and thus to shape one’s own future. When Benjamin recollects his childhood, he presciently describes a way of life that the Nazis were about to erase. This is what Sattouf also does in The Arab of the Future. He has captured Syria and Libya, both of which are now disrupted and destroyed. The return to Syria or Libya is now nearly impossible, and to convey those stories—however melancholy they are—offers a form of defiance. Through the simplicity of a child’s perspective, we gain new understandings of the past and uninhibited visions of the future.

Jonathan Guyer is a fellow at the Institute of Current World Affairs. He is a contributing editor at the Cairo Review of Global Affairs, where he served as senior editor from 2013 to 2015. He was a Fulbright fellow researching political cartoons in Egypt from 2012 to 2013. He previously served as a program associate for the New America Foundation’s Middle East Task Force and as assistant editor of Foreign Policy’s Middle East Channel. He has contributed to numerous publications including Guernica, New Yorker, New York Magazine, Nieman Reports, and Paris Review. On Twitter: @mideastXmidwest. 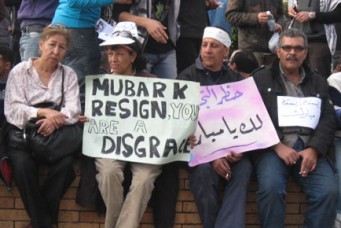 Special Report: Why the Past is Crucial to Egypt’s Future

The Fight For Mosul: Learning From The Past