Following Egypt’s January 25 uprising in 2011, Ethiopia started building a huge dam, the Grand Ethiopian Renaissance Dam (GERD), upriver. The concrete volume of the dam is 10.5 million m3, making it the largest dam—per volume—in Africa. It is located on the Blue Nile, 700 kilometers northwest of the Ethiopian capital Addis Ababa, and about twenty kilometers from the Ethiopia–Sudan border. It is worth noting that the Blue Nile accounts for more than half of the average annual flow of Nile water to Egypt.

Ethiopia claims that the sole purpose of building the dam is to generate energy necessary for its economy. The dam represents an important connection between water security and energy generation. In general, building a dam for energy generation should not be a problem because the water that will run the turbines will continue flowing to downstream countries, in this case to Egypt and Sudan. However, the construction of this gigantic dam, which has a 74-billion-cubic-meter reservoir that can theoretically store as much water as the total annual share of Egypt and Sudan combined, is a completely different story.

Hoping for a better life and access to electricity, the Ethiopian people funded the GERD with their limited resources in the hopes that it might generate a projected power capacity of at least 6,000 megawatts. Different experts, such as San Diego State University professor of mechanical engineering Asfaw Beyene, have agreed that the GERD is oversized, and that it will not be able to generate the amount of energy that has been publicly announced, or even half of it. In addition, most of the generated hydropower is slated for export, leaving the poor Ethiopians in darkness. It is clear that politics in this case trump legitimate engineering and human principles in favor of storing water and controlling the Blue Nile.

The GERD will store water in an area of 1,800 square kilometers—larger than the size of London—resulting in enormous evaporation and seepage losses in addition to possible upstream usage. These billions of cubic meters in losses will be cut from Egypt and Sudan’s water share. The potential reduction in the Nile water flowing to Egypt comes at a time when the country is significantly dropping below the water poverty line and approaching the absolute scarcity limit. The water poverty line is reached when the available freshwater share per person is 1,000 cubic meters of water every year. Egypt is approaching the 500-cubic-meter mark per person (per year). An additional water shortage caused by the GERD will enlarge the existing gap between the water supply and current demand.

Clearly, Egypt’s key concern regarding the GERD is safeguarding the lives of more than 100 million Egyptians and sustaining the country’s water supply, especially since Egypt depends on the river for 97 percent of its water needs, with the remaining three percent supplied by light rainfall on the northern coast and in the Sinai Peninsula and by non-renewable groundwater.

Indeed, the risk of water shortage caused by the GERD will directly affect food production and security in Egypt. Moreover, reducing the flow of water to Egypt will dramatically affect the resilience of the Egyptian Aswan High Dam, which stores water to be used by Egypt and Sudan during draughts. This in turn will also negatively affect the amount of electricity generated from the Egyptian dam. In addition to the technical and economic impacts of the dam on Egypt, the GERD will have serious environmental consequences such as higher soil salinity, less groundwater recharge, and more seawater intrusion.

Therefore, reaching an agreement between Ethiopia, Sudan, and Egypt on the filling and long-term operation of the dam before Ethiopia starts filling GERD is a serious issue for Egypt. A reduction of water availability by only one billion cubic meters at Aswan (a value that is much lower than most GERD filling and operation prediction scenarios) will result in an agricultural production loss of $430 million and of almost 294,000 feddans in agricultural land, as well as an increase in agricultural imports by 2.2 percent. Moreover, 290,000 families will lose their income, which will increase the possibility of migration and displacement of people to neighboring countries, create more instability and potentially exacerbate the threat of terrorism, from which the region is already suffering.

The Fight over Resources
The GERD project is an alarming example of competition over water, energy, and food resources in the Nile Basin. Ethiopia’s use of the dam to generate energy while Sudan and Egypt wait for their share of water to produce energy and food could become a grave issue, especially as populations inhabiting basin countries increase dramatically and their water, energy, and food demands rapidly grow.

In order to secure these three resources for the entire basin, there is a need to understand the reality regarding their availability. Indeed, there is a misconception that Egypt is getting the biggest share of the Nile water compared to the other Nile Basin countries. As a matter of fact, the river water reaching Egypt amounts to about 0.8 percent of the rainfall of the eleven Nile Basin countries. This means there is more than 99 percent of water resources that Egypt cannot access.

In fact, Egypt has a long history of supporting Nile Basin countries in water management projects on the upper reaches of the river. Egypt has never objected to the development of the Nile Basin nor does it object to the construction of dams that do not cause significant harm to Egyptians. On the contrary, Egypt has supported the construction of dams in different Nile Basin countries for either hydropower or rainfall-harvesting purposes. For example, Egypt supports South Sudan, Uganda, Kenya, Congo, and Tanzania’s pursuits to build new dams and implement water development projects.

Starting in 1949, Egypt signed an agreement and provided £1 million to support the construction of Owen Falls dam in Uganda. The dam helped provide hydropower for development and regulate the flow of water downstream toward the southern regions of Uganda. Recently, the Egyptian company Arab Contractors in a joint venture with Elsewedy Electric Company announced that it had started work on the 2,100-megawatt Stiegler’s Gorge hydroelectric dam in Tanzania. This project is endorsed and supported by the Egyptian government. Moreover, Egypt conducted the feasibility studies for a multi-purpose dam in South Sudan.

This spirit of collaboration should extend to agriculture and food production projects. There is much fertile land and enough rainfall in the basin to produce energy and food for everyone. Energy is not only restricted to hydropower; solar energy in the basin is underutilized, especially when considering that the basin includes areas that are among the highest in solar radiation on earth. A political vision which considers all countries along the Nile as one unit that shares knowledge and resources is key to having sufficient water, energy, and food for all Nile Basin countries.

A Technological Solution for Water Scarcity
Aside from the GERD, current water scarcity and food production in Egypt, like in most Middle Eastern countries, are serious challenges that are directly linked to population growth and the overuse of water. To produce one kilogram of wheat requires about 800 liters of water, and on average, fifteen thousand liters of water are needed to produce one kilogram of beef, an amount of water which is almost the volume of one-and-a-half concrete mixer trucks. These numbers differ from one country to another and depend mainly on production techniques and the technologies used. The moral of these figures is that more than two-thirds of the world’s freshwater is used for agriculture, such as in Egypt, where about 80 percent of the freshwater is used for agriculture irrigation. In order for Egypt and the entire Middle East to deal with water scarcity, researchers are focusing on fostering and applying the concept of “producing more with less,” or to use another expression, “more crop per drop,” which means producing more food using less water.

Our research team at the American University in Cairo (AUC) is working to understand the interrelationship between water and food to minimize the water footprint of our foods. Realizing the importance of research efforts geared toward solving the irrigation water problem more than tackling drinking or industrial water, the Center for Applied Research on the Environment and Sustainability (CARES) at AUC established the “WEF nexus lab” five years ago. It aims to contribute to water, energy, and food security not only in Egypt, but also in the Middle East and Africa.

The focus of the CARES’ WEF (Water-Energy-Food) nexus model is to use solar energy to power desalination, which is expensive due to its high-energy consumption, and then use the desalinated water to produce food in an environmentally friendly manner. The adopted desalination technique, Forward Osmosis, has low energy consumption which allows the complete use of solar energy for the desalination process. The desalinated water is then used to produce crops and fish from the same unit of water. Fish waste then serves as nutrients for the crops, which help produce 100 percent organic food.

In addition, the desalination reject brine (which is a harmful byproduct for the environment) was successfully tested and proven to produce algae and is currently being tested to produce artemia, or brine shrimp. If the testing of the artemia proves successful, it will close our “nexus” loop since it would be used as feed for the fish. The very success of this research depends on developing a closed loop in which the sun and seawater are harvested to produce fish and crops without disposing of any waste into the environment, and in which the fish are then fed.

CARES is now collaborating with several national and international partners and is working toward commercializing its WEF model and bringing it into application. Nothing can replace Nile water for Egypt, but more research and innovation similar to the work carried out by CARES is urgently needed to enhance water use efficiency and develop new technologies for desalination and wastewater treatment. Such innovations could be part of the solution to face the increasing population and associated water demand in Egypt and the entire Middle East, especially when such solutions are based on local resources such as the sun, seawater, and sand.

Hani Sewilam is both the founding director of the Center for Applied Research on the Environment and Sustainability at AUC and the director of UNESCO Chair in Hydrological Changes and Water Resources Management at the RWTH Aachen University in Germany. He is a professor of water resources and sustainable development. He coordinated capacity building programs of the United Nations Water between 2009 and 2011. On Twitter: @HaniSewilam.

Nile Basin: Toward a New Era of Regional Cooperation 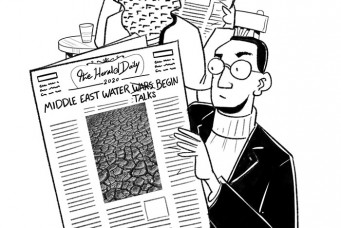 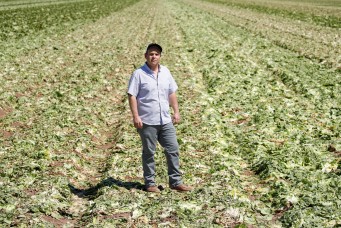