On a holiday morning this past spring, Israelis visiting the Golan Heights were surprised by an unseasonal spattering of rain that froze at the foothills of Mount Hermon. Jewish Israelis from around the country frolicked in the dusting of snow, and then wandered through the Druze town of Majdal Shams for soup or hummus at a restaurant sporting a Hebrew-sounding name.

Israelis love the “authentic” Druze experience. They love skiing on Mount Hermon and eating apples from the lively agricultural industry in the area. The international community views the Golan Heights as occupied territory since Israel conquered it from Syria in 1967, meaning that Israelis who live there are technically settlers. But by contrast to the stereotypical West Bank settler, who seems extreme even to other Israelis, most view the Jews living in the Golan as secular, salt-of-the-earth types, or cowboys since some raise cattle. As for the Druze left over from Syria, Israelis take little notice of the Druze’s tormented national identity dilemmas or dismembered families. The area is governed by civil law, lacks military checkpoints or border markers coming from Israel, and carries little of the conflict baggage so prominent in the West Bank and Gaza.

Since 1967, data compiled by the Israeli Democracy Institute shows that a majority, sometimes a large majority, of Israelis have opposed returning this land in exchange for peace. In early 2000, Ehud Barak’s negotiations over the Golan Heights with the Syrian government under Hafez Al-Assad resulted in 150,000 Israelis turning out to demonstrate passionately against withdrawal. In that demonstration protesters wore a variety of clothing and headgear—telltale signs of religious diversity among the demonstrators and the widespread support against returning any part of the Golan to Syria.

In 2011, Israel’s current ambassador to the United Nations, Danny Danon, wrote in the New York Times that Israel should annex all Jewish settlements “and uninhabited land” in the West Bank. He observed that after Israel unilaterally annexed East Jerusalem and the Golan Heights, both conquered in 1967, “Israel’s actions were met with harsh international criticism and threats of sanctions…[yet] the diplomatic storms soon blew over as the international community moved on to other issues.”

Danon was partially right. Global opposition to those annexations did remain declarative and Israel has suffered few penalties in political or economic terms. However, Danon did not go far enough. In the past there was at least a figurative tug-of-war between Israeli policy and international discomfort. In 2019 Israel faces hardly any resistance to its annexationist plans at all. In late March, President Donald Trump signed a presidential order recognizing Israeli sovereignty over the Golan Heights. The move was a nod to Israeli legislation from 1981 extending Israeli sovereignty over the area.

Trump’s announcement was a bombshell for international relations, and an election gift to Israeli Prime Minister Benjamin Netanyahu, who gloated of a “Purim miracle” in the run-up to Israel’s April elections. Recognizing Israel’s annexation of the Golan was also a major change of American policy. In 1981, the United States adopted the UN Resolution rejecting the de facto annexation and the U.S. government, under President Ronald Reagan, even supported sanctions on Israel—unthinkable today.

Ironically, the one place where reactions to Trump’s announcement truly blew over was in Israel itself, where a burst of exaggerated satisfaction quickly settled down. That is because, as the snowy spring day in April demonstrated, for Israeli Jews, the idea of the Golan as part of Israel is entirely natural.

Now annexation itself is becoming the new normal, not just in the Golan. In 2018, President Donald Trump moved the U.S. embassy to Jerusalem. Despite paying lip service to the idea that the city’s borders are not yet final, the move was a symbolic affirmation of Israel’s presence in Jerusalem as a whole. Netanyahu got the message loud and clear. Barely one week after Trump’s Golan Heights announcement, Netanyahu stated that he plans to extend sovereignty over all settlements in the West Bank. These were not just election-fighting words: annexation has been happening in physical forms, every day, on the ground, for years. The West Bank seems to be on the same path of normalization as the Golan Heights, just a bit behind.

Once again, the United States is falling into line: America’s ambassador to Israel David Friedman told the New York Times in June that Israel has a right to annex at least part of the West Bank, hinting at a more explicit break with erstwhile American policy. As Israel heads into a second, unprecedented election in September, observers can expect to see right-wing parties trying to outdo each other with more annexationist promises as they compete for voters in the right-wing political camp.

However, the seeming annexation juggernaut will eventually run headlong into an inconvenient truth: extending direct Israeli civil rule is not just about land—it is about people. The real question is not even borders. It’s citizenship. Land grabs might become normal, but people are Israel’s problem.

How Israel treats 2.7 million Palestinians in the West Bank and how it treats nearly two million Palestinians of Gaza is already redefining Israel’s putative democracy. What Israel does with people living in areas of future sovereignty will redefine Israeli society, identity, and its politics as well. The story of the Druze in the Golan, or the Palestinians of East Jerusalem, for that matter, is a good starting point for understanding what Israeli leaders have in mind.

After 1967, about 13 thousand Druze remained in the newly occupied part of the Golan Heights—others fled or were driven out. From the late 1970s, Israel quietly encouraged them to apply for citizenship as a de facto assertion of sovereignty, but most refused. When Israel passed the Golan law in 1981, the authorities attempted to force citizenship on the Druze. This time the latter responded with a concerted civil resistance campaign, culminating in a military standoff. Ultimately, Israel capitulated—allowing the Druze to hold documents stating that they have no nationality, and they are considered permanent residents. At present, estimates of citizenship range from 10 to 12 percent of the Golan Druze, whose total population today is  estimated to be between 20 thousand and  27 thousand. According to one report, just a few hundred held citizenship in 2015. As non-citizens, the Golan Druze do not vote in national elections, but Druze villages in the Golan were allowed to vote for the first time in local elections in October 2018. Given the resistance to Israel’s authority, and calls to boycott among Arab citizens of Israel, hardly any Druze showed up and numerous candidates for local government dropped out.

While Israel pushed the Golan Druze at the time to accept citizenship in order to assert its sovereignty, Israel’s right-wing leadership would be happy if not a single West Bank Palestinian chose to become a citizen, even if offered. The Palestinians of East Jerusalem are an excellent model of that option. As permanent residents, they too can apply for citizenship, but few have done so over the years and some are rejected. East Jerusalem Palestinians have long been allowed to vote in municipal elections, but hardly any do. They reject the symbols of Israeli authority, and conveniently Israel is not obliged to ensure equal civil rights as long as they remain residents but not citizens. Israel also has mechanisms to rescind residency rights altogether, and it does so regularly.

For years, the people problem has been the key obstacle for Israelis who support annexation of Palestinian areas. As Danon noted, the two annexation models (in the Golan and in East Jerusalem) are a great inspiration to Israel’s right wing. Yet if, like in those areas, Palestinians in the West Bank were offered a path to citizenship, their numbers pose a more serious threat to Israel’s Jewish identity. On the other hand, if Israel never offers full citizenship to residents of future sovereign territory, international condemnation and local dissent might grow too strong.

However, in practice, Israel can offer citizenship for Palestinians in the West Bank, because more likely than not, the vast majority of Palestinians will not want it—as residents have rejected it in East Jerusalem and in the Golan Heights. Even if Israel offers West Bank Palestinians a measure of local civic enfranchisement, the vast majority of Palestinians will probably not use it. By paying lip service to democratic institutions, Israel can make its ownership of the West Bank, at least, as normal as the Golan and maybe one day Israeli Jews will never know the difference.

Yet, the idyllic stillness Israelis perceive in the Golan somehow feels deceptive. Behind the grand slopes of the Hermon, Majdal Shams looks frozen in time. The streets and alleys are not planned like an Israeli town. A statue shows Druze fighters waving swords. There are land mines under the ground in the Golan, and an unnerving sense that the ghost of Syria is right beneath one’s feet.

The Druze clearly have not lost their identity. Yet, within a few years after the start of the current civil war in Syria, a growing number have requested Israeli citizenship—small, but enough to constitute a trend. There is no question about the Palestinian identity of East Jerusalemites, but they too have shown a spike in applications for citizenship since the early 2000s. In 2018, there were vibrant conversations about whether East Jerusalem Palestinians should vote in the local elections, and two Palestinian candidates planned to run for municipal office. In the next municipal elections the idea of voting might seem more normal to young East Jerusalem Palestinians hearing those debates.

When all else fails, perhaps residents in annexed lands will eventually break precedent. Neither Palestinians nor Druze are giving up their identity, but if citizenship and voting were once rejected as a sign of normalizing Israel’s annexation, these “normalizing” trends might be re-conceptualized as inevitabilities in the future. “Normal” citizens, after all, can organize, protest, demand—and eventually receive—full civic and national equality within a single state. Ultimately, two can always play at being normal.

Dahlia Scheindlin is a political analyst and public opinion researcher who writes regularly at +972 Magazine and is a policy fellow at the Mitvim Institute. 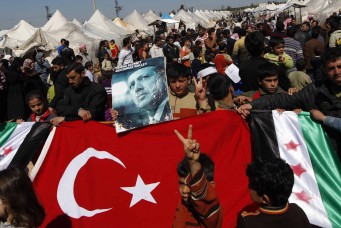