With Israel’s air strikes against Iranian positions in Syria intensifying, top security officials in Tehran have shifted to a more vocal and vociferous rhetoric to clarify Iran’s Syria policy and warn of the consequences. In his latest reaction on March 3, Ali Shamkhani, Secretary of Iran’s Supreme National Security Council (SNSC), reiterated that Iranian forces “are in Syria to help the Syrian government and people, and will continue to stay there as long as the Syrian government wishes.”

The remarks were a response to Israeli Prime Minister Benjamin Netanyahu’s assertion during a meeting with Russian President Vladimir Putin on February 27 that Israel will press ahead with military action against Iran-backed troops until they leave Syria.

A significant question in this respect is why Tehran insists on maintaining a major military presence in Syria even though the Bashar Al-Assad government has emerged as the irreversible victor of the eight-year-long civil war?

The evident increase in Israeli attacks against Iranian positions over the past two years or so does not seem to have altered Iran’s strategic calculus vis-a-vis the war-ravaged country. The “Islamic Republic of Iran will keep all its military and revolutionary advisers and its weapons in Syria,” said the Revolutionary Guards top commander Mohammad Ali Jafari. To hammer home the point and leave no doubt about Tehran’s long-term plans, Jafari also warned—using a Persian expression—that the “Zionist regime” was “playing with the lion’s tail.”

So the question gains more traction: Why does Iran persist with military involvement in Syria despite its waning raison d’être on the one hand and growing costs and casualties on the other?

From the Iranian perspective, this is not an irrational approach to foreign or domestic policy. It is instead a different kind of rationality that only makes sense within the ideological framework of the Iranian state. Having pursued a revolutionary ideology and revisionist identity since the inception of the Islamic Republic of Iran in 1979, Tehran is now caught up in a security structure of its own making from which it is not easy to escape. Significantly, the 2015 nuclear deal (JCPOA) provided a rare opportunity for Iran to start freeing itself from this ideological framework by integrating the country back into the international system while preserving its independence. However, the Trump White House’s antipathy toward the JCPOA has allowed the ideological rationality to reify in Tehran’s halls of power.

Israeli leaders including Netanyahu believe that the continued presence of Islamic Revolutionary Guards Corps (IRGC) troops as well as Iran-backed paramilitary forces in Syria is ultimately aimed at undermining Israel’s national security. This is not totally accurate, but it is not entirely wrong either. Here is why.

Tehran did not have much choice but to rush to Al-Assad’s rescue when the Arab-Spring-inspired Syrian uprising in early 2011 jeopardized the survival of its sole strategic ally. Already suffering from what has come to be known as “strategic loneliness,” the Islamic Republic could not afford—by abandoning Damascus—to send alienating signals of hesitancy and disloyalty to its proxy network in the Middle East, which constitutes a key pillar of the unconventional security structure Iran has painstakingly built since the 1979 revolution.

Such an asymmetric constellation has evolved as part of Tehran’s deterrence infrastructure that is also underpinned by its missile program. Iran’s revolutionary ideology and revisionist identity—which has deprived it of the chance to forge conventional alliances and find reliable allies—was thus a structural factor that compelled Iran to fight for the Assad government’s survival, at a time, incidentally, when international sanctions were taking a heavy toll on the Iranian economy. And needless to say, the fall of Al-Assad could have imperiled Hezbollah as Iran’s linchpin proxy in the region. In fact, by fighting for the survival of the Syrian state, the Iranian state saw itself fighting for its own security and survival in the long run.

Iran’s persistent yet increasingly costly presence in Syria is a continuation of the same policy, albeit at a higher and more systemic level. Iranian leaders are arguably bracing themselves for the rainy day, when a military confrontation between Iran and Israel or the United States may erupt for various reasons, including the possible collapse of the half-dead JCPOA and Tehran’s potential breakout or even “creep out” towards advanced-level nuclearization. On that day, Iran will not have a wide range of options to rely on for deterrence of military action, let alone defense against it.

Four decades of economic sanctions and international isolation have prevented the Islamic Republic from developing an air force congruent with its strategic ambitions. Unable to procure modern military aircraft or new spare parts, it has been forced, for the most part, to revamp and upgrade the few warplanes that it had purchased before the 1979 revolution or received from Iraq during the 1991 Gulf War.

Tehran knows that its outdated air force is no match for those of Israel or the U.S. and its Arab allies in the region. It has thus invested in developing a robust missile capability, but that has its limitations too, given Israel’s possession of one of the world’s more effective and advanced missile defense arsenals.

The only option, therefore, that might make a difference in favor of Iran in the event of military conflict is the ability to take the fight to enemy territory and prolong it into a large-scale war of attrition. This is hardly plausible without a resilient military presence in Israel’s neighborhood, or what Iranian decision makers describe as “strategic depth.”

Other analysts have quite a different view. “I think the most important reason for Iran’s continued presence in Syria is the perception that the U.S. is reverting to an era of big power politics and thus relegating the Middle East security to regional actors,” Heidarali Masoudi,  professor of international relations at Shahid Beheshti University said.

Yet, Iran’s military entrenchment in Syria is believed to be driven by more than a desire for present deterrence or future defense. “The prevalent notion in the Israeli public debate tend[s] to view Iran as an aggressor and a hegemonic state. The ‘offensive’ school of thought, that is,” Shemuel Meir, Israeli commentator and former IDF analyst, stated. “This is a direct result of the ‘information warfare’ led by our prime minister Netanyahu on a daily basis.”

Apart from its primary deterrence motives, it seems Tehran is ideally seeking to project power against Israel by, among other things, eroding its response capability, even though growing costs and casualties are making the ambition more and more difficult to sustain.

“When you fight for many years against a weak enemy,” Israel’s former chief of staff Gadi Eisenkot told the New York Times before his departure in January, “it also weakens you.” For Israel, this seems to apply as much to Hamas as to Iran-backed forces in Syria.

Iran’s continued allocation of resources to the Syrian war effort does not make much sense from a rational economic perspective, particularly given growing domestic dissent over the government’s failure to create decent living conditions for its own citizens. Yet, Iranian leaders seem to wager that their Syria investment will guarantee the survival of the Islamic Republic against possible military conflict in the future, even though it is increasingly fueling popular dissatisfaction and jeopardizing domestic stability.

Maysam Behravesh is a doctoral candidate in the Department of Political Science and a Research Fellow in the Center for Middle Eastern Studies (CMES), Lund University. On Twitter: @behmash. 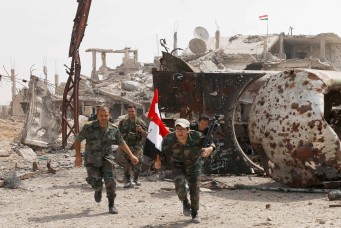 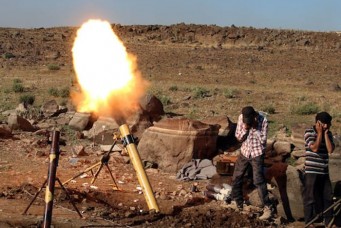