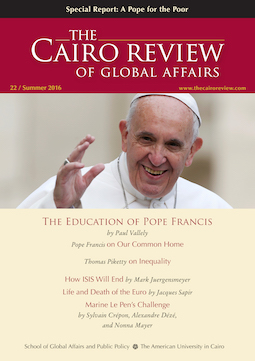 A Pope for the Poor

A Pope for the Poor

Taekwondo world champion and member of Egypt’s parliament Caroline Maher is determined to be a voice for the voiceless: Egyptians with disabilities.

Happenings, speakers, and events at the American University in Cairo in Summer 2016.

President Barack Obama needs to square up with the realities of the Middle East.

How the murder of a social media star reveals deeper problems in Pakistani society.

The Education of Pope Francis

When Jorge Mario Bergoglio became the Roman Catholic pope in 2013, he took his name from Francis of Assisi and dedicated himself to championing the poor. The first non-European pontiff in a thousand years, and the first from the southern hemisphere, he launched his papacy with a condemnation of capitalism’s culture of waste and indifference to poverty.

In an extract from the papal encyclical Laudato Si’, the bishop of Rome makes an impassioned plea to save the planet from ecological destruction: “We must regain the conviction that we need one another, that we have a shared responsibility for others and the world.”

How ISIS Will End

The Islamic State group is losing territory in Iraq and Syria, but it may have staying power in one of its three permutations: ISIS is simultaneously a movement for Sunni Muslim empowerment, a global jihadist movement, and an apocalyptic cult.

Life and Death of the Euro

Europe’s response to the Greek debt crisis in 2015 exposed European cooperation and solidarity as a hollow claim. The euro has become a Greek tragedy, resulting in falling incomes, rising unemployment, and fraying social fabric. Saving the European Union may require killing the single currency.

By Alexandre Dézé and Nonna Mayer and Sylvain Crépon

Young, modern, and media friendly, the daughter of National Front founder Jean-Marie Le Pen has recast the extreme right party as a less xenophobic, more palatable, movement. But if the National Front fails to shed its racist ideology, it is unlikely to build on its electoral successes.