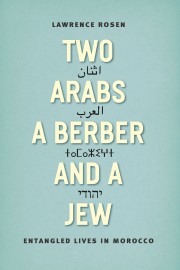 Two Arabs, a Berber, and a Jew: Entangled Lives in Morocco. By Lawrence Rosen. University of Chicago Press, Chicago, 2015. 400 pp.

There’s a good deal of truth in Lionel Trilling’s claim, Lawrence Rosen says, that “every person we meet in the course of our daily life, no matter how unlettered he may be, is groping with sentences toward a sense of his life and his position in it.”

Two Arabs, a Berber, and a Jew: Entangled Lives in Morocco is an anthropological validation of this claim. It is Rosen’s love letter to his four friends, two Arabs, a Berber, and a Jew; to a country, Morocco, undergoing profound changes from a medieval monarchy in the late nineteenth century to a modernizing postcolonial nation of the late twentieth; and to his anthropological career, begun in the mid-1960s, which he sums up as “unrepentant eavesdropping,” a term used by Paul Theroux. As with any love letter there is poetry—lyrical intricacy is the only way to convey a “surface seething with life and movement.” The lives documented, the time and place they live in, are not fixed. It is the complexity that Rosen wants to acquaint us with, the understanding that identities are intertwined, that it is “possible to live in a world in which groups that appear incommensurable are, by the terms of the socio-logic they practice, workably compatible.” In Sefrou, the small city in central Morocco where Rosen conducted his fieldwork, we see Jews interact with Berbers and Arabs, friendships across wealth and culture, differences celebrated.

Haj Hamed Britel is an elderly raconteur with a cornucopian knowledge of Morocco stretching back to the late nineteenth century; Yaghnik Driss a teacher and devoted lover of his Muslim faith; Hussein ou Muhammad Qadir a savvy Berber entrepreneur; and Shimon Benizri a kindly Jewish cloth dealer. Each of them revels in the differences they collectively represent. Each of them constantly inquires of himself, and others, how best to live his life, the nature of good and evil, the role played by culture and religion, how to make moral choices. The layers of validations and insecurities, hadiths, and history lessons exhibit the very unordinary nature of ordinary men and women.

Morocco was pushed unceremoniously into the twentieth century. The first Morocco we are introduced to, through the Haj’s memories of his boyhood, is on the edge of change. Sultan Hassan, hailing from a dynasty that ruled Morocco independently from the seventeenth century until the French protectorate, was living his last few years. There were no paved roads or bridges, increasing European domination, and chaotic tribal fragmentations. By the time of Rosen’s first encounter with Morocco in the mid-1960s, the initial fervor that marked the years after independence from France in 1956 had passed and the realities of a diminished postcolonial economy were settling in. The majority of Jews and the French had departed, corruption was rife, and political elections were dominated by personal alliances. By the next decade, a combination of drought and rising population strained national resources, which were further weakened when three hundred and fifty thousand unarmed civilians marched into the Western Sahara to assert Moroccan sovereignty.

Rosen makes his last visit in 2008. By this time, the country has witnessed colonization, decolonization, civil war, industrialization, “modernization,” urbanization, bureaucratization. Increasing disparities between rich and poor and an overreaching king provide the context for rising religious fundamentalism. Morocco is on an uncertain trajectory. The middle path, of the Arab Yaghnik’s urban education and religious piety, and Hussein the Berber’s rural entrepreneurship, is threatened both by religious radicalism and increasing bureaucratization. The traditional social fabric we have become acquainted with throughout the course of the narration is in danger.

Rosen describes relationships between men of different cultures working like an electrical grid whose “contrasting charges energized their lives and united their disparate networks by their shared assumptions and modes of fabrication.” Religious interchange is part of this. The Haj is a practicing Muslim, but his idea of his faith is one of tolerance, a focus on persons and not their faith. Hussein the Berber describes his jocular relations with his Jewish friends in more direct terms—he could say things to Jews that he could not say to fellow Muslims. For Yaghnik, the most pious of the quartet, he is as certain of his faith as he is open to understanding those of others. Where others may see contradictions, he sees compatibilities; where others sense discord, he synthesizes.

This social landscape informs the political. Power is intensely personal. The strength of an office is dependent on attachments that characterize the personal connections of the officeholder. The aftermath of a sultan’s death is described as a “reshuffling of a deck of cards” as alliances are tested, confirmed, or reconfigured. It’s denoted in Arabic by the word fitna—a pattern of disorder. Some Moroccans see society as held together by a series of knots that are stronger than any single strand, such that the gaps that open up, like the differences among men, contribute to the strengthening of the whole. It is these human relationships too, Rosen suggests, that explain the lack of an enduring middle class in the Arab World, since networks cannot be passed along to an offspring.

But this inclusionary style has a problem—if you respect a man because of how much other people respect him, because of the direction of the crowd, then change and revolution become near impossible. “We have a saying,” Hussein the Berber told Rosen. “Every shout drives the cattle.” There are plenty of people, Hussein concludes, who are foolish enough to be driven in just this way by any politician with a loud voice. The loud voice of tyranny, Moroccans seem to say, is preferable to chaos. It was this ambivalence that was on display during the French occupation, and ultimately the answer to Rosen’s own question of why did so few people know about the inhumane prison conditions that political prisoners endured for their views.

The navigations of inquiries, balancing of integrities, pursuit of ideals amongst the “ordinary” (if there is one thing we can take from this book it’s that this word as a signifier should be banished) is what constitutes a polity. What does Morocco as a “nation” mean to these men? “It was never for the Haj or his compatriots exactly a question of national identity in the contemporary political sense but of a more or less definable zone within which the game could go forth,” Rosen writes. “It was as if everyone was involved in the same set of circumstances and rules, and it was this singular, uniting pursuit that made all the difference.” Hussein the Berber does not necessarily view his fate as tied to that of his nation. His attachments remain with the local, whether in forging associations, his vision of safety, or in his memory. Indeed this shift to the local and private concerns is something that Rosen notes more generally after his 2008 visit—a result of disillusionment of wants being met at the national level.

But throughout the course of Rosen’s fieldwork trips the people-centered politics was also beginning to change. While previously making deals in the world revolved around kinship, increasing movement meant people had to establish ties of friendship instead. By the 1980s it had become about money. Hussein the Berber talked in terms of entering “the game” and needing money to earn respect and a desire for give and take. The word mes’uliya, which had previously been translated as “responsibility,” was being spoken frequently on the streets to denote the failure to treat others with the courtesy that always made it possible to form alliances with whomever, wherever beneficial.

The picture we are left with is that the very “entanglement” of the title—messy and constantly shifting networks of relations and interconnections—may be forced into being tempered into something less complex. Rosen cites the more moderate worlds of Yaghnik and Hussein as being the most likely to endure in Morocco or, at least, “two versions of a single alternative their successors may choose to accept.” He acknowledges that the ability to live in difference may slowly dissolve, but that the emotional and organizational benefits it provides won’t be easily replaced. He offers a stark warning that if that middle course Yaghnik has walked (dressing in trousers in one setting and native garments in another, eating with a fork at one person’s house and with his fingers at another) is to be a path of stability rather than one that borders on the chaotic, he will have to find a way to continue his own style of compromise without compromising. And, in order to avoid the dangers of radicalization so prevalent across the Muslim world, a way to convince others that such a course is both possible and authentically Islamic.

This is a very personal account. Rosen is quick to admit the difficulties he found in writing another person’s story, and detaching his own interpretations and expectations from the representation. It is not a collection of biographies but rather a celebration of his relationship with each man and his own process of nurturing as an anthropologist. This makes it hard to gauge how representative these four men are of Moroccan society and how much their portrayal is more a reflection of their specific relationship with Rosen. It’s easy to get lost. This is the intention, to more effectively convey the density and complexity of such human networks. Women are invisible in Rosen’s account—this is something he acknowledges as an inevitable consequence of being a male researcher without intimate access to their world. While their battles are acknowledged, they are not dwelt upon and the eradication of the possibility of their ultimate role in the future of Moroccan society is highly limiting.

This is the nature of an ethnographic account. The way categorizations—of kinship and residence, religious logic—are intertwined, cross-cutting and diverging, and the manner of intellectual richness which exists within them, confounds stereotypes and an easy method of documentation.

Helen Mackreath is the Middle East correspondent for the Los Angeles Review of Books. She has contributed to the Economist, White Review, openDemocracy, E-International Relations, Forced Migration Review, and Jadaliyya. On Twitter: @helenmackreath.

An Interview On Moroccan Salafi-jihadists