The Cairo Review’s assistant editor, Ariana Bennett, spoke with journalist Dahr Jamail about the outcome of COP26, the death trap of fossil-fuel capitalism, and the uncertain future of our planet. Jamail has covered the climate crisis for Truthout and is the author of the book The End of Ice: Bearing Witness and Finding Meaning in the Path of Climate Disruption.

The 26th UN Climate Change Conference produced an outcome document that Jamail deemed a failure. While the outcome text made an unprecedented reference to the role of fossil fuels in global warming, progress was clouded by a last-minute change to phase “down” instead of phasing “out” coal, the largest source of carbon dioxide emissions, due to pressure from India and China.

Given the agreements included in the Glasgow Climate Pact, experts estimate warming will reach 1.8 to 2.4 degrees Celsius by 2100. Limiting warming to 1.5 degrees Celsius is a pipe dream, Jamail said. To remain in compliance with this target set by the 2015 Paris Agreement, the world needs to wean itself off fossil fuels and the resultant dependent economy. The world needs to reduce emissions by 45 percent to reach carbon neutrality by 2050. However, emissions are expected to rise 14 percent in the next nine years.

Parties will reconvene before the end of 2022 at COP27, set to be held in Sharm El-Sheikh, Egypt, to revisit their Paris Agreement commitments.

Cairo Review: Are these Conferences of the Parties (COPs) generally effective?

Dahr Jamail: “In general, I would say definitely not, as far as engaging or enforcing policies internationally that would actually bring carbon dioxide emissions down. In short, there is nothing binding in these agreements that cause them to be enacted in a physical way, which has to happen.”

Specifically pertaining to the Glasgow Climate Pact, he said, “[parties] admit that emissions must fall by nearly 50 percent from 2010 levels by 2030 for global warming to be kept at 1.5 degrees Celsius above pre-industrial baseline levels. And yet, under the existing emissions reduction pledges, emissions will be nearly 14 percent higher by 2030 than they were in 2010.”

Additionally, rich countries consistently avoid financial responsibility for their disproportionate share in causing the climate crisis, he said. The Glasgow Climate Pact commits developed countries to doubling climate financing within the 2021-2025 $100 billion annual target; however these same countries were unable to meet a similar goal set for 2020 in 2009.

These broken promises foster distrust among developing nations in COP summits. Countries can make pledges all day long but until binding commitments are agreed to, with penalties incurred if conditions are not met, pledges do not carry any substance, Jamail said.

CR: Given the disappointment following COP26, what made COP3 (Kyoto Protocol) and COP21 (Paris Agreement) successful?

DJ: “Define success…I would define success only as rich countries taking full responsibility for the havoc that they’ve caused to the planet, footing the entire bill for poor countries, and immediately bringing carbon dioxide emissions down, like the example we saw during the pandemic. Nothing short of that kind of global reaction is worth anything at this stage of the game.”

CR: Would you call the outcome of COP26 successful?

DJ: “I think it was a dismal failure, and I’m not using that adjective lightly. It couldn’t even get countries to pledge to phase out coal or reduce subsidies to the fossil fuel industry or to protect forests…I’ve heard it referred to as the COP-out 26, and I think that’s very applicable.”

CR: What are your thoughts on the media coverage surrounding COP26?

DJ: “Context is everything, and by and large the context of the coverage of COP26 is completely lacking the context of the scale of the emergency and how far along in the crisis we are.” Calling 1.5 degree warming a “fantasy,” Jamail said, “we’re still locked in to catastrophic changes by 2100. There’s nothing to indicate, with what’s on the table, that global temperature rise is going to be kept anywhere below 5 degrees Celsius…Everything we’re witnessing today is just from 1.2 degrees warming.”

The severity of the crisis is unparalleled. According to a 2019 study, humans are injecting carbon dioxide into the atmosphere at a rate ten times higher than it was during the paleocene eocene thermal maximum (PETM), a global warming event 56 million years ago to which there is no modern geologic equivalent. It is likely to be repeated within the next few hundred years, Jamail said.

“Three months after that study was published we hit 415 parts per million (ppm) of carbon dioxide in the atmosphere, and less than two weeks after that, the International Energy Agency announced global carbon emissions set a record in 2018, 2 percent higher than the previous year. Things are unravelling at a rate that is alarming, and coverage should be alarmist. In my opinion, it doesn’t go nearly far enough when you look at what’s actually happening to the planet.”

CR: What are some agreements you would have liked to see come out of the conference, from both developing and developed nations?

DJ: “I think developed countries have to foot more of the bill, if not the entire bill, of the costs developing countries are incurring from climate crisis-caused disasters. The developing countries are emitting almost negligible amounts of carbon dioxide compared to countries like the United States, India, China, and Russia, yet they are the ones paying disproportionate amounts of money to rebuild and keep themselves afloat as the disaster commences.”

He also highlighted the importance of putting an end to fossil fuel subsidies. At the conference, there were more than 500 lobbyists representing over one hundred fossil fuel companies—representation greater than any single country. In fact, despite claims of safety and inclusivity, COP26 campaigners warned the event would be the whitest and most privileged conference to date as attendees faced lack of access to vaccines and changing travel rules.

UN Secretary General Antonio Guterres acknowledged the plight of women, youth, indigenous communities, and those on the frontlines of the climate crisis, recognizing their disappointment in the face of insufficient commitments from national governments.

“I would imagine that the groups of people he issued that apology towards probably don’t want it,” Jamail said. “Talk is cheap.” Immediate action and compensation are what nations—who are literally going under water—desperately need, he emphasized.

CR: How do the discordant actions of policy leaders, such as taking a private jet to a climate conference, affect public perception of the climate crisis?

DJ: “It only breeds more cynicism and, I think, hopelessness when you see people continuing along the lines of business as usual while the planet literally burns.” The message sent to young people and activists is disheartening, he added. While Greta Thunberg opted to take a train to the conference, Jamail asked, “Could you imagine Joe Biden taking a boat, for example? I think it’s a pretty sad state of affairs when we have to rely on a Scandinavian schoolgirl to exhibit appropriate behavior during a crisis.”

CR: There’s been a larger emphasis recently on climate adaptation as opposed to merely mitigation, in light of the severe climate events of the past year. What do you think of this transition and how can countries implement both in tandem?

DJ: “I think the only thing left to do is move towards adaptation. That does mean taking radical steps, like abandoning the idea of the perpetual growth economy, and that means everything has to become a lot more local. Shipping goods around the globe is a dinosaur system. It’s going to go away whether we like it or not. The more actively countries can start adapting to that now, as opposed to being forced to, the easier that transition will be.” Increased local production, with the help of advanced manufacturing and automation, can help reduce maritime transport, which accounts for 2.5 percent of global greenhouse gas emissions.

Capitalism’s perpetual growth, driven by the fossil-fuel economy, is incompatible with emissions reductions targets, and euphemisms like “green capitalism” are merely “psychological protection,” Jamail argued. “The idea of perpetual growth is ridiculous; it’s impossible, and it’s insane,” he said. “Deep sacrifices have to be made, especially in developed countries.” Sacrifices, Jamail said, like those made during pandemic lockdowns, which proved that when necessity and government preferences align, changes can be made rapidly.

“Bottom line, there is no way we can maintain the global economy and lifestyles in developed countries that we have today. Full stop.”

CR: While adapting to climate change how will countries tackle the predicted influx of climate refugees?

DJ: “That is one of the biggest issues that governments face going forward, even in the United States. The Pentagon noted in their annual report that [climate refugees] are one of the biggest security threats going forward not just in the United States, but globally. We know, from studies that have come out, that the number of climate refugees every year is going to increase into the hundreds of millions going forward…We’re going to see displaced people in numbers we’ve never seen from any war or anything else before.”

CR: Was there a significant emphasis on the Middle East and North Africa region during COP26?

DJ: “The short answer is no, absolutely not….There was not nearly enough attention brought to the climate havoc that’s already being wrought upon countries in Africa and the Middle East.”

CR: Saudi Arabia is praised for its fight against climate change in the region, yet wants to remain a leader in global energy markets while phasing out hydrocarbons. What do you think?

DJ: “How is that possible? Talk about speaking out of both sides of your mouth. You can’t have one without the other. If you are going to be serious about transitioning and getting off oil and gas and reducing your carbon dioxide emissions, you have to abandon the fossil fuel economy. Period.”

CR: Yet, Western countries also have a hand in perpetuating oil dependence in the region…

DJ: “Because all of our economies are fossil fuel-based. Without that deep, deep, deep collaboration, the global economy is not going to continue to function. The United States has a deep stake in the perpetuation of dictatorships and regimes in oil-rich countries so the United States maintains access to that oil and gas.”

A COP26 funeral was held on the conference’s last day by the international environmental activist movement, Extinction Rebellion, mourning the “failed process” of COP26—a harsh reminder of the hard work left to do. Jamail encourages people to start behaving according to the crisis we are in, where today is better than tomorrow. “It’s only going to keep intensifying,” he warned. 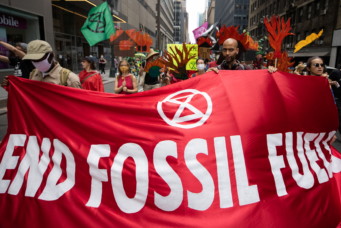 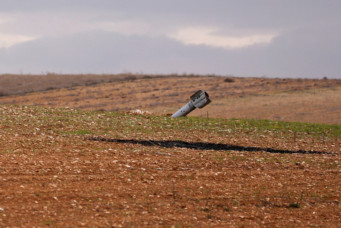