Over the past two decades, many predicted the rise of Asia as an economic power to rival the West. Now, as China has become the world’s second largest economy—perhaps to be the largest within the next decade—and Asian tigers such as Korea and Taiwan, and the fast developing economies of South East Asia are also proceeding in kind, Asia’s rise has become a fact. Many have begun to question the political and military ramifications of Asia’s ascendance in the context of weakened Western economies—ramifications that will doubtless redraw the map of international relations in coming years. However, while the consequences of Asia’s rise have been exhaustively analyzed in the global context, relatively few have questioned the effect of a rising East on the rapid transformation of the countries of the Middle East.

This is a question that should not be ignored. First, it is entire political systems, not just political leaders, which have begun to change in the aftermath of the ‘Arab Awakening.’ These changes will loosen, though not entirely shift, the historical baggage carried by the countries of the Middle East and, as governments slowly become more accountable to their people, they may begin to develop more independent, self-interested, and globally-minded foreign policies. This is especially true in the case of Egypt. Another development that will re-shape the Middle East’s relationship with the world is the discovery of massive shale oil deposits in North America and the invention of cost-effective technologies to extract them. As the United States becomes less and less dependent on the Arab Gulf states for its oil supply, those states will need to search elsewhere for buyers. They will invariably turn to the oil-hungry economies of India, China, and greater East Asia to pick up the slack. In turn, Asia and especially China, will feel the need to develop ever-closer relations with African and Arab nations as they increasingly pin their energy needs on Middle Eastern reserves. This is a process that is already well under way in the nations of the Arab Gulf and Sudan, and was in Libya and Syria until recent political upheaval.

All of this will have obvious repercussions for Western relations with the Arab World, particularly Egypt and the Arab Gulf. Concurrently, relations between Egypt and the Arab Gulf and China and other Asian powers will undergo a similar transformation. It is hardly coincidence that the first official foreign visit of Egypt’s new president, Mohammed Morsi, was to China. It is unrealistic to expect the shift in economic, political, and military relationships that will occur from these changes to occur immediately. The tangled web, which binds the Arab World and the West together, is far too dense to come untwined anytime soon. Nor could the military and naval capability of China, or any other Asian nation, ever compensate for the withdrawal of U.S. military support from the region.  Still, it would be shortsighted to ignore that Asia, and China in particular, will become an increasingly important player in Middle Eastern politics over time. One has to look no further than the Obama administration’s “pivot” towards Asia for confirmation of a future Middle East less dominated by American interests.

In fact, the Asian presence in the Middle East and, for lack of a better word, the Middle Eastern “pivot” towards Asia have already started. In the automobile industry, Asian companies have supplanted European auto manufacturers in the Middle Eastern market, just as they did with electronics. This is particularly true concerning South Korean companies such as Kia and Hyundai, but affordable Chinese automobiles such as those offered by Chery have also become increasingly popular. Outside of economic penetration, links between Pakistan, India, and the Arab Gulf have expanded significantly in recent years. Pakistani and Indian expats now constitute a large portion of Gulf populations, which will ultimately have an effect on societal traditions there, while the relationship between Pakistani, Indian, and Arab Gulf militaries have become ever closer in recent decades. On the flip side of the evolving Asian presence in the Middle East, Arab investment in Asia has also increased.

Relations between Asia and the Middle East will become increasingly important to policymakers on both sides in coming years. And this shift will inevitably result in the expansion of, not only economic but also social, political, and military relations. However, these changes will come slowly. While Asian countries will play an increasingly important role in the Middle East, they will not supplant the West in the near future.

Nabil Fahmy, a former Egyptian ambassador to Japan and to the United States, is the dean of the School of Global Affairs and Public Policy at the American University in Cairo.
Print 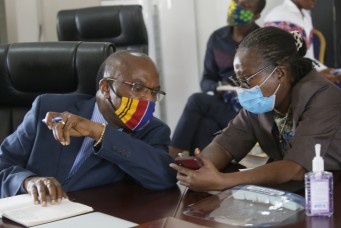 Neither East Nor West