Much of the discussion in the United States about President Barack Obama’s trip to the Middle East next week centers around whether he will initiate any new diplomatic moves on Arab-Israeli peace-making, and what he might say about Iran and the continuing Arab uprisings. It is also worth viewing the visit from the perspective of the Middle East itself, where perceptions of the United States and its actions in the region are very mixed, and largely negative.

The latest Gallup polling study released a few days ago shows that in 30 foreign countries the median approval rating of U.S. policies dropped to 41% in 2012, from 49% in 2009. In Europe it dropped from 42% to 36%. The highest disapproval rates were in the Middle East and South Asia, reaching over 75% in Pakistan and Palestine. The highest approval rating in the region was 54%, in Libya.

Conclusion: people judge the United States by its policies, not its rhetoric or values. Also, disapproval of U.S. policies is not a peculiarly Arab or Middle Eastern problem, but a worldwide phenomenon. So we should not ask what Obama’s country can do for us, but rather how we and the world view the United States and the consequences of its foreign policies.

I would make four basic points in this regard. This is a historic moment of change in our region, when most Arabs are trying to transform dictatorships into democracies, and the United States is also reformulating some of its policies (like retreating from Iraq and Afghanistan). Change, danger and opportunity are in the air in U.S.-Mideast relations, and we must grasp the strands of each of these three elements in order to use the ongoing change to exploit positive opportunities and reduce dangers.

The second point is that such a comprehensive analysis of change, danger and opportunity can only be credible and useful if it starts from the assumption that any country’s foreign policies should mutually and simultaneously address the legitimate interests and basic needs of all parties in the region, whether Americans, Arabs, Israelis, Iranians, Turks or others. A policy like attacking Iraq or threatening Iran that mainly focuses on American and Israeli interests — these two often mesh into a single dynamic in Washington, D.C. — will not prove sustainable in the long run.

The United States has not mastered the diplomatic craft of shaping policies that acknowledge the core interests of all concerned, and thus could lead to win-win outcomes. This is why its mediation in Palestinian-Israeli negotiations since 2003 have consistently failed, and why diplomatic engagement with Iran only started to make small advances in Kazakhstan last week after the United States and its Western partners offered a package of moves that addressed the concerns and rights of both sides.

My third point is that the United States, or any other actor in the region, needs to appreciate more maturely the differences and relationships among the four components of any foreign policy: interests, values, rhetoric and policy actions. In recent years — and the self-congratulatory moralistic bombast has not changed appreciably from one American administration to another — the United States has tended to use rhetoric to emphasize its own values and interests, which it affirms through disproportionate use of militarism and aggressive diplomacy. The policies on the ground should ideally reflect the values that are so eloquently articulated by American leaders, and admired around the world — but U.S. foreign policies often contradict those stated values, i.e., the United States wages wars to fight terrorism, but those wars turn out to be the single most powerful generator of new terrorist recruits in this generation.

The fourth point I would make is that any foreign country that reassesses its policies in the Middle East must reckon with a region that is now far more complex and volatile than it had been during the previous several generations, when Arab-Israeli issues, the Cold War and energy access lone were the main policy drivers. Today the Middle East is defined by the Arab-Israeli conflict, Iran’s regional roles, the Arab democratic uprisings, the wreckages in Iraq and Afghanistan, the impact of new actors like Turkey, the Gulf Cooperation Council states, China, and numerous Arab Islamists, the threats of terrorism and weapons proliferation and also of weak or collapsing states, severe socio-economic disparities within and among countries, the new ideological cold war across the region, and the amazing impact of new digital technologies in the hands of emboldened young men and women who no longer fear their authoritarian regimes, occupying and colonizing Zionists, or invading and threatening Western armies.

Any foreign power’s policy in the Middle East must weave together how these many domains influence each other, and, especially, how much these conditions reflect the consequences of those policies. In my next column I will analyze whether U.S. foreign policy in the Middle East in recent decades has contributed to these complex conditions that define our region today.

America and a Changing Middle East 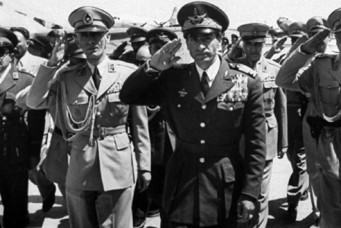