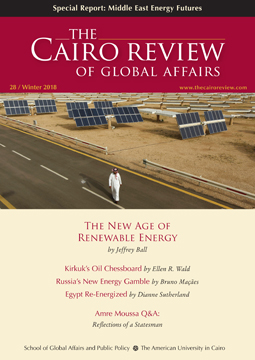 Death of the Blogosphere

Egyptian bloggers, writing and reporting on the January 25 uprising, suddenly went offline after 2015. Why and where are they now?

Happenings, speakers, and events at the American University in Cairo in Winter 2018.

The rise of populist governments worldwide is not the byproduct of winning or losing political systems, but rather of a failing world order.

Reflections of a Statesman

Amre Moussa is one of Egypt’s most widely respected diplomats and politicians. He speaks to Cairo Review Associate Editor Asmaa Abdallah about the way out of the Arab World’s crises, and the need for a political system in Egypt that reflects the “spirit of the twenty-first century.”

With Iran’s deepening engagement in Syria following the expulsion of the Islamic State (IS), the old Iranian-Israeli feud is reigniting.

If African countries are to achieve their Sustainable Development Goals by 2030, major changes are needed in the fields of funding, allocation of resources, and developing the necessary institutions.

Is the United States wisely taking advantage of its recent energy boom?

The New Age of Renewable Energy

Renewable energy is moving from niche to mainstream markets. One of the clearest signs yet: the Middle East is embracing it. Can a transformation still in its infancy grow into a full-blown energy revolution?

ISIS, the Kurdistan Regional Government, the Iraqi government, and numerous other regional and international players have all vied for control of Kirkuk’s oil. But the struggle to rule this commodity has become a political chess game stretching across northern Iraq and beyond.

Russia aims to position itself as a leader among energy-producing equals in Eurasia. Since 2015, Russia has sought to play a more active role in the Middle East, setting its sights on the region’s energy resources to achieve this strategic goal.

As new discoveries of natural gas deposits are made in Egypt and an interest in renewable energy resources arises, this industry report forecasts good times ahead for the North African country.

Saudi Arabia is undergoing a massive transformation with all eyes set on the “Vision 2030” plan. How successful will the country be in reshaping its future?

The conflict between Saudi Arabia and Iran marks a deepening division between regional powers and international hegemons in the Persian Gulf. The Saudis and Iranians have to learn to cooperate or risk further confrontation.

Since the 2011 uprising, the freedom and mood of Egyptian cinema and television have changed considerably. A story of the growing standoff between creators and censorship in post-2011 Egyptian drama.

By Elissa Miller and Karim Mezran

For years, many actors have tried to mediate peace efforts for the Libyan crisis, but instead of an end to hostilities, conflicts remain.

India’s Prime Minister Narendra Modi may be a global pop star, but at home he
is struggling. Yet, despite many domestic challenges and crises, he has managed
to maintain his popularity in India.