The Islamic State of Iraq and al-Sham’s (ISIS) seizures of cities and towns in northern Iraq signals a growing influence of the radical Islamic organization and threatens wider violence and instability. But as Baghdad’s hold on the country weakens, the Kurds are able to make a stronger case for an independent Kurdistan.

The Kurdish Regional Government (KRG) has been more successful in its defense against ISIS than the central government. Kurdish forces, numbering well over 100,000, appear better equipped and trained than the militant groups attempting to confront them. Responding to ISIS’s rapid advances, the Kurdish forces, or Peshmerga, deployed large numbers on June 10, to areas that have been long been contested by the Kurds and the central government in Baghdad, particularly Kirkuk. The status of Kirkuk has put a perpetual strain on the relationship between Baghdad and the KRG. The status quo under which Kurds, Arabs, and Turkmen have governed the city—an agreement enforced by the American forces in Iraq since 2003—has remained in place for over a decade.

For the Kurds, seizing Kirkuk from ISIS was a golden opportunity to regain access to significant oil resources, and put an end to years of dispute with the central government over the implementation of Article 140 of the Iraqi constitution that seeks normalization for Kirkuk’s multi-ethnic population. Securing the annexation of this oil-rich region for the already rich Kurdistan would put the KRG in a more powerful position when declaring independence.

ISIS’s surge in Iraq, speaks to a bigger aspiration to see no border between Syria and Iraq, which is the primary means of the group to achieve an Islamic state. But that would not be viable without sustainable economic resources. Having secured large swaths of oil-rich territories in eastern Syria, ISIS has been inspired to continue the same effort in Iraq—particularly in the north, where oilfields are abundant. Kurds are likely the only group that can preserve the oilfields in Northern Iraq. The international community, Turkey included, recognizes this very well.Nestled between Maliki’s embattled government and ISIS militants, Kurds are best-positioned to keep these areas safe for now, and maybe for the long run, with the Peshmerga as a de facto military force. If the situation drags out longer, the weak Iraqi government might have to accept a permanent presence of Kurdish forces in these areas. However, the Iraqi Kurdish leadership would need to consider the cost of deploying more forces to these areas: it should not come at the expense of securing its porous borders with Syria. With a brutal civil war raging on in the neighboring country and a growing uncontrollable militancy, Iraqi Kurdistan faces a serious spill-over threat.

The silver lining for Kurds is that, suddenly, the establishment of a Kurdish state seems more feasible–especially with Turkey seemingly no longer objecting to the notion. When Prime Minister Nouri al Maliki’s government stopped sending budget payments to Kurdistan in February, exacerbating the budget issue particularly the distribution of oil resources between the KRG and Baghdad, and brining negotiations to a halt, the KRG gave up any hope for productive talks with Baghdad. The Kurds retaliated by sending oil shipment to Turkey and signing a 50-year agreement with Ankara to use Turkish pipelines for Kurdish oil exports. Moreover, the Kurds now believe that they have no part in the ongoing Sunni-Shiite conflict. As there was already little incentive for the Kurds to stay tethered to Baghdad, and with the latter losing its control on internal security, the ISIS’s surge was indeed the last straw.

But serious challenges remain ahead for the Kurds. Among them is whether the KRG can consolidate control in areas it claimed back, which have until recently been controlled by the Iraqi army including Nineveh, Kirkuk and, parts of Diyala province. Otherwise, if the vacuum left by the Iraqi army cannot be filled, ISIS militants would have the upper hand in these areas as well as in western Iraq, with grave and unpredictable consequences. Furthermore, the survival of an independent Kurdish state will be largely dependent upon a powerful neighboring ally such as Turkey. As for Baghdad, it will not be in a position to challenge the establishment of a Kurdish state. Baghdad will likely be in state of collapse, with its attention focused on securing the remainder of Iraq from disintegration.

For the first time since the U.S. invasion the dynamics have shifted in favor of Kurdish independence. Iraqi Kurds are more powerful than ever, and Turkey is more willing to accept the existence of an independent Kurdish nation at its border. Unless Iraqis immediately reach a comprehensive national reconciliation that satisfies the long marginalized Sunnis and the Kurds themselves, which is very unlikely given the unraveling situation, the Kurds will continue pushing forward for their independence. The map of the Middle East is on the verge of changing much to the benefit of the Kurds.

This article is reprinted with permission from Sada.  It can be accessed online at: http://carnegieendowment.org/sada/2014/06/19/rise-of-isis-golden-opportunity-for-iraq-s-kurds/he38 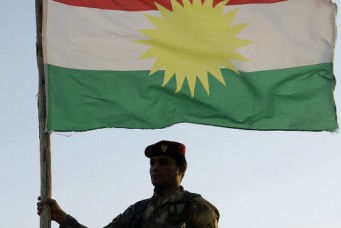 The Rise of Syria’s Kurds