After the recent Tikrit offensive, Iraqi Prime Minister Haider Al-Abadi is turning his focus to Anbar, where only limited areas of the expansive western province remain under government control. Yet while the fight against the Islamic State (IS) continues, there is another vital struggle going on inside Iraq over the Iraqi state itself. This battle pits Abadi and aligned nationalist Shia factions against a series of Iran-backed militias and their political wings, whose power expanded dramatically following the June 2014 collapse of the Iraqi army in the north.

Although the Tikrit offensive appears to have been an Iranian initiative, Abadi deftly managed to make the Iraqi state a central player. Initially, the bulk of the media attention was on the presence of Islamic Revolutionary Guard Corps’ (IRGC) Qods Force Commander Qasem Soleimani in Salahuddin, and reports of Iranian-backed militias closing in on Tikrit, Saddam Hussein’s hometown. The key groups included Asaib Ahl Al-Haq (AAH), which splintered from the nationalist Islamist Sadrist movement in 2004 and became Iran’s proxy during the previous civil war; the Badr Organization, which was founded in Iran in 1982 and whose long-time leader, Hadi Al-Ameri, is viewed as the political godfather of the Popular Mobilization Forces, or Hashd (Al-hashd Al-Shaabi); and the Hezbollah Brigades, a smaller group with a reputation for quality operations, headed by a man known as Abu Mahdi Al-Muhandis, the Hashd’s military commander and a Soleimani confidant.

As the militia-led advance into Tikrit stalled in mid-March, Abadi had the chance to invite the U.S.-led coalition to take part, targeting IS’s most well-defended positions within the city. This required the militias to pull back—not only because the United States demanded this, but because the militias could not allow themselves to cooperate with U.S. forces. Then Abadi ordered government forces forward, led by “Golden Division” special forces personnel. Abadi’s well-choreographed walk on April 1 down central Tikrit, with Salahuddin Governor Raed Al-Jubouri, reinforced the impression of the government in the lead.

Abadi’s strongest move to bring the Hashd to heel was an April 7 cabinet vote that formally put them under his authority as commander-in-chief, as Iraq’s constitution dictates. This authority is reinforced by the power of the purse, as only the cabinet can appropriate budget money for salaries for Hashd personnel. It may also be reinforced by legislation, as the proposed “National Guard” law, which would give legal structure to the Hashd and create locally recruited units in Sunni provinces, places authority in the hands of the prime minister. However, that bill is tied up in parliament, and at present the Hashd’s only legal standing comes from the budget authorization; there is no statute regulating its structure, chain-of-command, and such.

Abadi’s challenge in reasserting the authority of the state is easier to understand with a look back at the Shia militias’ rise. Their growth prior to June 2014 may be divided into three periods. The first was pre-2003, when Iran supported a series of Islamist factions as part of its war with Baathist Iraq. All of them, directly or indirectly, were splinters from the Dawa Party, the mother party of all Shia Islamists, which was founded in 1958 and has held the premiership in Iraq since 2005. The most powerful was the Badr Brigade, the armed wing of what is now called the Islamic Supreme Council of Iraq (ISCI). While ISCI was an Iranian tool during this period, some factions, like Dawa itself, maintained some independence from Iran.

The second period of militia growth was post-2003. The key militia that challenged Badr was the Mahdi Army, the armed wing of the Sadrist movement. The Sadrists arose out of a movement created by Muhammad Sadiq Al-Sadr, whose son, Muqtada Al-Sadr, became a symbol of the movement. During the 2005-2006 civil war, both Badrists and Sadrists fought Sunni militants, while death squads killed thousands of Sunni civilians. Crucially, ISCI/Badr’s advantage in military power and organization allowed them disproportionate share in elections, and many Badr militiamen infiltrated the security services. The Sadrists were more associated with criminality, and the resulting backlash allowed Prime Minister Nouri Al-Maliki to make a name for himself as a nationalist by going to war against them in 2008.

The third militia period began in 2010 and revolved around the parliamentary elections. Although Maliki’s State of Law Coalition (SLC) won a majority in Shia areas, the secular, mostly-Sunni Iraqiya coalition won a narrow plurality. Maliki turned to Iran for help, and in retrospect this was the beginning of an alliance between Maliki and Iran. Although the United States and Iran supported Maliki, only Iran used his reelection to form an enduring alliance.

While Maliki would come to sponsor multiple militias, two connections were notable. One was a new alliance with Ameri’s Badr. Ameri threw his seats behind Maliki in 2010, formally split with ISCI in 2011, and then joined Maliki’s coalition for the 2013 provincial elections. More telling was Maliki’s sponsorship of AAH, a minor splinter from Sadr’s movement that didn’t amount to much until Iran sponsored them. In 2010 they were still a small group, but they took on a visible presence in Baghdad during Maliki’s second term (December 2010 to September 2014). SLC parliamentarian Kamal Al-Saadi appears to have been Maliki’s political liaison to the group; at a June 2012 AAH military parade, Saadi gave a speech warning that Maliki was the target of a conspiracy that targeted all of Iraq. He attended a similar event with AAH in May of the next year.

By June 2014, when army divisions defending Mosul collapsed in the face of the IS onslaught, Badr, AAH, and smaller Shia militia groups were already well-established. During a moment of national despair, on June 13, three days after the fall of Mosul, Abd Al-Mahdi Al-Karbalai, representative of Grand Ayatollah Ali Al-Sistani, gave a sermon of monumental importance. He declared in a fatwa that the fight against IS is a jihad and called upon believers to volunteer for the security services in sufficient numbers. However, his language (“citizens able … are to volunteer for the security forces to achieve this holy aim”), along with later clarifications, makes it clear Sistani was not giving Shia a mandate to wage war against Sunnis in general, but rather to support the state. Nonetheless, the fatwa gave cover for a militia surge that led to a garrison state mentality and their dominance of Baghdad and surrounding regions.

This statement has been the subject of much controversy, in part because Sistani had always been a restraining force against Shia vigilante action against Sunnis and for national unity. The statement itself did not single out Shia citizens, although the religious sermon that immediately preceded it unusually contained comments on physical preparation for war under the leadership of “the Imam the Mahdi,” giving the call a more Shia flavor. (The Friday sermons typically come in pairs, a religious sermon, then a political one.) And the popular response, with volunteers streaming into militias, enhanced this sense.

It was shortly after this that Maliki created the umbrella organization for the militias, commonly referred to as Hashd, from Al-Hashd Al-Shaabi (“Popular Mobilization”). Maliki offered volunteers roughly $750 per month, including amounts for salary, hazard pay, and food allowance, although few volunteers were paid for much of 2014. He had no legal basis for doing so, aside from his constitutional office as commander-in-chief.

The command of the Hashd is the most controversial issue in the continuing debate over the National Guard bill. Despite Sistani’s apparent intent that Shia would enlist in the armed forces, the bulk have joined irregular forces. The most prominent are Iran-aligned groups. This includes Badr’s Ameri, the political godfather of the Hashd, and AAH. It also includes Hezbollah Brigades commander Muhandis, a man infamous for having a U.S. (and Kuwaiti) terrorist designation and whom Maliki took as an advisor during his second term. Muhandis now appears to be the Hashd’s military commander. Having played a shadowy role last fall, he gave his first press conference as “deputy leader” of the Hashd on December 31. National Security Advisor Falih Al-Fayyad, a subdued, “grey-suit” Islamist tied to former Prime Minister (and current Foreign Minister) Ibrahim al-Jaafari, is the Hashd’s nominal leader, but it is unclear whether Fayyad has any real control.

Yet despite the prominence of the pro-Iranian groups, there is another collection of Shia volunteer forces that identify clearly with the Iraqi state. They are tied either to Sistani’s organization in Karbala or established Shia parties, mainly the Sadrists and ISCI. Sadr’s primary militia, the “Peace Companies” (Sarayat Al-Salam), is the successor to the Mahdi Army. The Sadrists have taken a nationalist line, saying that the Hashd organization should be abolished as soon as possible and volunteers enlisted in units under the prime minister’s direct authority. Their interest is clear: Sadrist candidates won thirty-four seats in last year’s parliamentary election, compared to just a single seat won by AAH—yet AAH, due to joint support from Iran and Maliki, has seen its power grow. ISCI has taken a more ambiguous stance, but politically is closer to Abadi than Ameri.

Thus the stage is set, with the key political struggle being between Abadi and Ameri. Ameri’s party already has twenty-two seats in parliament, and his allies are more powerful on the ground at present, having experienced a surge in recent months due to their front-line role fighting Sunni jihadis. Yet Abadi has the constitutional office, the power of the purse, and can count on the support of Shia factions whose interests lie in maintaining Iraq’s independent political system. So the open question is whether, in the three years until Iraq’s next election, that period end with someone like Abadi or Ameri in control.

This article is reprinted with permission from Sada.  It can be accessed online at: http://carnegieendowment.org/sada/2015/04/23/rise-of-iraq-s-militia-state/i7pv

Kirk H. Sowell is a political risk analyst based in Amman, Jordan and the publisher of the biweekly newsletter Inside Iraqi Politics. On Twitter: @uticensisrisk.

Badr at the Forefront of Iraq’s Shia Militias

After Ramadi, Militias in the Lead 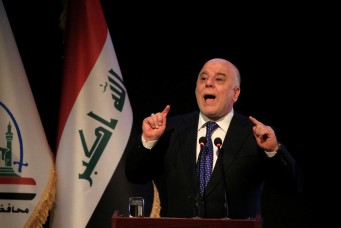