At a donor conference on the reconstruction of Gaza held in Cairo on October 12, in the aftermath of a devastating 51-day war this summer between Israel and Hamas, the international community pledged $5.4 billion, half of which was earmarked for rebuilding Gaza. Given the many key players that are likely to be involved in the reconstruction project, and the divergence of their individual interests in the process, the rebuilding of Gaza may prove to be a formidable undertaking.

Though the donor meeting in Cairo was reminiscent of the one held in Sharm El-Sheikh, Egypt, following the 2008-09 war between Israel and Hamas, this time the context was different. The Cairo meeting came following unprecedented destruction across the entire Gaza Strip, with the $4 billion estimated preliminary cost of rebuilding three times higher than that of the previous war. In addition, the current meeting was convened amid a growing number of voices calling for an end of the seven-year

Israeli blockade on Gaza. Also, unlike 2009, this donors’ meeting was held in the presence of a Palestinian Government of National Consensus (GNC), formed after Fatah and Hamas agreed on April 23 to end seven years of Palestinian political schism and reunite the Gaza Strip and the West Bank under one single authority. More significantly, the dire socioeconomic and humanitarian conditions in Gaza were reaching a breaking point on the eve of the latest war. So critical was the situation in Gaza that a United Nations report in August 2012 questioned whether Gaza will be a livable place by the year 2020 should the blockade and armed conflict conditions continue.

The $2.7 billion earmarked for reconstruction falls short of the $4 billion the Palestinian Authority (PA) asked for to finance its Gaza reconstruction plan, and, more importantly, these pledges came with strings attached. According to the conference chair’s conclusion, international financial support will be made possible under the following three prerequisites: the GNC takes effective control in Gaza, including “full control over the Gaza crossings, customs authorities, and civil service reform;” a robust and efficient monitoring mechanism is set up “to prevent aid being used for non-intended purposes;1” and border crossings are opened between Israel and Gaza “to allow Palestinian entrepreneurs to trade between Gaza and the West Bank, and to access world markets.”

Yet, for a number of reasons, the conditions might not be met. These include the fragile nature of Fatah-Hamas reconciliation agreement after years of mistrust and animosity, the ongoing state of open conflict between Israel and Hamas despite the open-ended ceasefire of August 26, and the political uncertainty after the collapse last April of the U.S.-sponsored peace talks between Israel and the PA. Given all this, there is good reason to believe that, apart from providing badly needed humanitarian relief aid, the process of rebuilding war(s)-ravaged Gaza could stop before it even starts.

On the Palestinian front, it is still not clear whether the GNC will be able to govern “effectively” in Gaza, as required by donors. Fatah and Hamas signed an agreement on September 25 to allow the GNC full control, but whether this will enable the government to function there remains to be tested. Although Hamas has not officially governed Gaza since the formation of GNC on June 2, it retains a strong presence there through its core constituency, its thousands of armed militants in Gaza, and the majority it holds in the Palestinian legislative council (which was suspended in June 2007 but should resume its activities according to the agreements of April 23 and September 25). Hamas concerns and views on a number of highly contentious issues, therefore, need to be taken into account by the “consensus” government. These issues include law and order, the reintegration of public institutions between Gaza and the West Bank, the fate of the approximately forty thousand civil servants Hamas appointed during its seven-year rule of Gaza, the control of border crossings with Israel and Egypt, and the implementation of the PA plan for Gaza’s reconstruction. How to address these highly sticking questions without threatening Palestinian reconciliation or jeopardizing the prospects of getting Gaza reconstruction project off the ground will be a tough nut to crack.

Donors at the Cairo meeting also demanded that border crossings be opened between Israel and Gaza. Yet, it is still unclear the extent to which the Israeli government will be willing to fully end its blockade on the strip. This also includes removing Israeli-imposed buffer zones inside Gaza, which take up 35 percent of its agricultural land, and allowing full access to Gaza’s territorial waters as determined by the Oslo accords. So far, there is no indication on the part of the Israeli government that it intends to do so.

More complicated still, there are doubts that the recent UN-brokered agreement to monitor imports of reconstruction materials to Gaza is relevant to a post-war construction setting. Some worry the problematic nature of the monitoring mechanism—which includes installing video cameras, putting international inspectors on the ground, and creating a database of suppliers and consumers to be shared with Israel—could institutionalize the Israeli blockade instead of ending it.

Hamas and other Palestinian political factions will reportedly hold indirect talks with Israel in Cairo on October 27 in an attempt to solidify the current ceasefire and to reach a mutual understanding on the situation in Gaza. Judging by previous rounds of talks between the two sides, the prospects any future agreement will hold for long are far from certain. Even if one assumes donor funds are readily available and the GNC takes effective control over Gaza, this uncertainty regarding a durable agreement between the two sides pushes the future of the whole Gaza reconstruction project into unknown territory.

At the Cairo donor conference earlier this month, speaker after speaker emphasized the unsustainability of the status quo in Gaza, demanding fundamental change and vowing not to go back to pre-war situation. Yet, because of a lack of resolve or absence of imagination (or perhaps both), no clear policy or vision for a way out or a way forward was presented there; only conditions and prerequisites on financial aid that is not sure to come and a reconstruction process that is not certain to go too far.

This article is reprinted with permission from Sada.  It can be accessed online at: http://carnegieendowment.org/sada/2014/10/23/challenges-of-rebuilding-gaza/hsk5

Mohammed Samhouri is a Palestinian economist and a former senior economic advisor in the Palestinian Authority. He is a regular contributor to Sada. 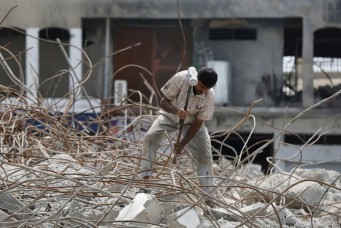 Zionism vs. Arabism, Not Hamas in Gaza 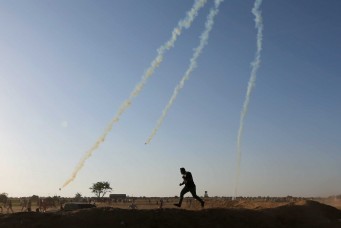