Established by the Fatimid dynasty in the 900s, Historic Cairo was shaped by succeeding rulers and regimes over the centuries. The area’s unique wealth of archeological sites gives it a place among the United Nations Educational, Scientific and Cultural Organization’s (UNESCO) World Heritage List. Modern day residents and initiatives continue to alter and add onto this heritage; but contemporary developments in the area are bound by a complex web of legal regulations.

The simple act of defining the legal boundaries of Historic Cairo was a decades-long process. The area has figured on the UNESCO World Heritage List since 1979; and when it was first nominated for the title, the heritage site was known as Islamic Cairo. The map accompanying its candidacy dated back to 1948 and outlined five main areas of distinguished historical significance: Al-Fustat, the Ibn Tulun mosque and its surroundings, the Citadel and Mamluk fortresses, Fatimid Cairo, and the historic cemeteries of Cairo’s City of the Dead.

Speaking at a webinar held by the American University in Cairo’s Law and Society Research Unit, Architect and Conservation Specialist Ahmed Mansour described the 1948 map as “more of a sketch than an actual map,” as the document only defined the broad outlines of the area.

Up until 2007, legal maps of Historic Cairo failed to include many of its archeological sites. In addition, these maps made no mention of the Salah Salem tunnel and the Ring Road, both infrastructural developments that have widely shaped and facilitated access to the area. In light of these unmentioned landmarks and developments, questions lingered surrounding the exact delineations of the heritage site.

It was not until 2010, when UNESCO launched the Urban Regeneration Project for Historic Cairo (URHC), that a clear delineation was established. Carried out in collaboration with the Egyptian government, the project aimed to implement measures for the protection of Historic Cairo, encompassing not only heritage preservation but also socio-economic and environmental regulations for the area’s development.

UNESCO describes the project as being “based on the assumption that the tangible heritage of the World Heritage Site can only be preserved if life is kept in it;” but revitalising the area as an urban tourist hub while upholding the needs and interests of its inhabitants has proven no easy task.

In April of this year, the Egyptian government ordered a revamp of the Al-Fustat neighborhood, which falls into the broader project of rehabilitating Historic Cairo into a prime tourist destination with integrated services; but conservation and development efforts of this nature are bound by a multitude of often conflicting requirements. Such projects must work toward structural improvement while also preserving the area’s historical and architectural singularity. They must also attend to the interests of various stakeholders including the state, the tourism sector, and the densely populated area’s residents.

For this reason, developments in Historic Cairo are subject to a complex legal framework. Overarching these regulations is Law 119/2008 on Unified Building. The law is primarily aimed at consolidating Egyptian planning and building regulations into one comprehensive legislation, and is divided into five sections concerned respectively with urban planning, urban harmony, licensing regulations, tenant unions, and penalties. The second and third sections rely on certain foundations and standards approved by the Supreme Council for Planning and Urban Development, and meticulously outline regulations from the maximum height of a building, to room surface areas, and air duct dimensions.

Further guidelines for the preservation of historic landmarks are specified in Law 117/1983 on the Protection of Antiquities, which sets the legal definition of antiquities and places them under the Ministry of Tourism and Antiquities’ jurisdiction. Meanwhile, Law 144/2006 and its Executive Regulations set out further protective measures for inventoried buildings, and demolition procedures for ordinary buildings.

Other legislation pertains more specifically to local governance and environmental preservation. Law 43/1979 establishes the election of local government units from governorate to district authorities, to enhance the efficiency of urban management at the micro level. Law 38/1967 on General Public Cleaning governs the management of solid waste -an especially prominent issue in Cairo, where 15,000 tons of solid waste are produced everyday, according to the World Bank.

Assisting the efforts of legislative bodies and governmental institutions are a number of conservation initiatives working to ensure that development projects are carried out in a way that serves local communities and encourages their socio economic empowerment. One such organization is the participatory conservation initiative, Al Athar Lina (The Monument is Ours), which focuses on heritage preservation in the Al Khalifa neighborhood of Historic Cairo.

Al Athar Lina was founded in 2012 and is run jointly by the NGO Built Environment Collective and the architectural firm Megawra. The initiative’s work focuses on three parts of Al Khalifa neighborhood, namely Al Khalifa street, the Hattaba area of the Citadel, and the Southern end of the neighborhood, which encompasses the Al Sayeda Nafisa Shrine and other historic cemeteries. All of its projects are carried out in cooperation with the Ministry of Tourism and Antiquities, as well as other government bodies like the Cairo Governorate authority, and center on the implementation of community-based conservation conservation efforts founded on participatory research.

The reason for this emphasis on participatory research is that “when heritage is seen as a community resource, community members can see the value in its preservation,” said May Ibrashy, conservation and heritage management specialist, and founder and chair of Megawra.

Since its inception, the initiative has completed the restoration of five heritage sites and two historical buildings. Their latest project, said Ibrashy, will work on the renovation of Qubbat Al Imam Al-Shafi’i, a carved wooden dome which was imported from India in the thirteenth century and placed over the Imam’s grave.

The initiative has also launched a number of development projects in collaboration with governmental bodies and residents of Al Khalifa neighborhood, including the Athar Lina School for Art and Heritage, the al-Khalifa Community Center, and the capacity building program Khalifa Exchange, which encourages artistic collaborations between local artisans and designers for the creation of products inspired by the neighborhood’s heritage and craftsmanship tradition.

Latest among these efforts is the Citizen Participation in Historic Cairo applied research project, the aim of which is to study three types of neighborhoods in the area which embody different aspects and challenges of heritage conservation.

The first is traditional Historic Qasabas, like Al Khalifa neighborhood, which is home to many archeological sites and therefore rich in opportunities for tourism. The neighborhood is used as a case study for the development of a heritage conservation and management plan, working towards both architectural preservation and sustainable development. The second is modern pockets of urbanism within the historic city, like the Zaynhum public housing project. The project focused on the improvement of Zayhum’s open spaces and its integration into the surrounding area.

The latter issue is a prominent one in several parts of Historic Cairo, including the Fustat area, where structural neglect and poverty have led to the construction of several illegal buildings over the years. Government demolitions in the area have been carried out since 2016, and increased in advance of Egypt’s historical transfer of twenty-two royal mummies to the new National Museum of Egyptian Civilization, in the world-acclaimed Pharaohs’ Golden Parade. In light of the demolitions, 771 families were resettled after the removal of over 1400 informal housing facilities; but many were forced to search for alternative housing due to lack of documentation and administrative complications, leading to strong contention among locals.

Despite the ample work carried out by legislative bodies, governmental institutions, and conservation initiatives, a number of structural challenges continue to hinder development efforts in Historic Cairo. Chief among these issues is the implementation of existing legislation.

In Ibrachy’s view, “There are great laws in place for the protection and conservation of heritage in Historic Cairo, but there are some serious issues with their implementation.”

One notable example is the notion of “Haram Al-Athar,” a key legal area concerned with the immediate surroundings of a heritage site. Law 117/1983 permits the Supreme Council of Antiquities to define curtilage areas around monuments and archeological sites, where any form of intervention is forbidden without explicit permission from the Ministry of Tourism and Antiquities.

Common practice, however, has been to forbid interventions indiscriminately, even if permission is sought from the Ministry. This canonical policy derives from the commonly held belief that listed buildings should stand apart from their urban context -one which constitutes an ahistorical approach to urban planning, as historical mosques and places of worship, for example, have historically been vibrant community centers.

Besides its historical inaccuracy, the prohibition also hinders development efforts in dilapidated areas, like the Hattaba neighborhood. The area is home to 500 families, who have been strictly forbidden from making renovations to their homes since the 1970s. The prohibition, intended as a conservation measure for the area’s historical and architectural heritage, has had unintended but nefarious impacts on inhabitants’ quality of life. Structural deficiencies were further exacerbated in the wake of the 1992 earthquake, which wrought severe damages to Al Khalifa district and Historic Cairo at large.

Implementing legislation in a way that benefits local communities in Historic Cairo requires, plainly, more vocal participation from community members in decision-making processes. As previously mentioned, the fourth section of Law 119/2008 concerns tenant unions, while Law 43/1979 stipulates the establishment of elected municipal councils, meant to serve as a medium between residents and local authorities. Yet, as Mansour duly noted, these laws are scarcely implemented in Historic Cairo or other parts of the city.

Due to the relative scarcity of citizen involvement in urban planning, many development projects are launched without consulting local communities or having the necessary, transparent conversations about these projects’ timelines and objectives – because the mechanisms needed to carry out these conversations are largely absent. In parts of Historic Cairo, development projects may have the unwanted effect of gentrifying working class areas, a form of displacement which does not necessitate demolitions, but naturally arises when residents’ economic statuses do not rise to meet the growing cost of living.

The exclusion of community members from decision-making processes is a disservice both to community members and to heritage conservation at large. As Al Athar Lina’s work aims to show, tenants and local residents have more vested interest than anyone else in preserving historical sites in their neighborhoods.

“Managing the city is about regulating change, and this is a complicated affair,” said Ibrashy. “We need greater community inclusion in drafting laws that regulate developments in Historic Cairo. We need to include residents and community members in decision-making processes, and take their interests into account when carrying out heritage preservation or development projects,” she concluded.

Cairo: Megacity Without a Mayor 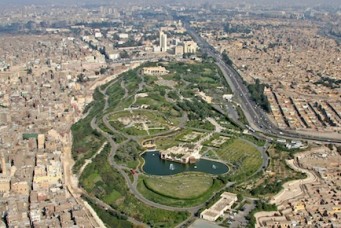 A Garden in Cairo