Death is at the end of every street. Mohamed Messara whispers this in my ear as he points to a photograph he took in the Libyan desert that bleeds dust and belches hot air as bullets fly, many bullets, as the photo of a rebel fighter in the battle to free the city of Sirte shows.  A myriad of empty shells, a carpet thrown over the dust and mud of the road.

Before leaving his hotel room, Amr Abdallah recites the shahada, bearing witness that Allah is One and Mohammed is the Prophet of Allah.

Hussein, a soldier with the opposition kneels under the weight of a necklace of oversize bullets glittering under the Libyan sun, a golden necklace fanned over his chest. Amr Abdallah stands facing him. His weapon is a small black plastic box. It shoots pictures. Bullets fly around him. He steadies his hand and shoots the picture. I’m standing before it at The Photographic Gallery at the American University in Cairo. It hangs on a cream-colored wall among 51 others in the exhibit, Libya: The Road to Freedom, photographs taken by Amr Abdallah of Reuters and Mohamed Messara of the European Pressphoto Agency.

They always worried about snipers. Gadhafi loyalists who picked them out of the landscape of a broken city and squeezed triggers on weapons that poured out death like a hard rain falling on the desert floor.

Both men had been shot. Abdallah in the fleshy part of the shoulder and Messara whose bullet-proof vest protected him from death, but did not stop metal from piercing his shoulder just under the neck. The next day he returned to the scene of combat. Adrenaline rushing. Like a junkie who can’t stop using, he goes back to the streets and alleyways, his cameras slung over his shoulders. The right one was still aching from the wound.

Gadhafi had promised to search out the dissidents in every house, every street, every alley. Zanga zanga.

He looked like a teenager. Many of the opposition soldiers in their jeans and tee shirt uniforms were. The truck he was driving swerved in an attempt to avoid the onslaught of pro-Gadhafi bullets against metal. The truck overturned. A rebel soldier ran to the car, pulled the dead, barefoot driver from the wreck, cradled him in his arms as if nurturing a child and ran into the street that was a river of dirty water. A soldier was on his heels. A rifleman covered their escape. No one even glanced at Messara, crouching before them, bracing his camera for a steady shot. The New York Times ran the picture the next day. Messara saw the woman, a Gadhafi supporter with the colors of the Libyan flag painted on her face. Red was in the shape of a heart.  She was shouting, cursing the opposition. She was shouting for the attention of United Nations Secretary General Ban Ki-moon as he left the Arab League headquarters on his way to Tahrir Square. She held a large photo of Muammar Gadhafi in her left hand. Messara clicked the frame while she was in mid-sentence.

I turned a corner in the pristine gallery and faced a photograph of a dead Gadhafi placed above another one of his dead son.

Men antom, who are you? Gadhafi had interrupted a speech to the thousands of Libyans crowding the streets of Tripoli and Benghazi. Incredulous, how could you do this to him, he was a king in a colonels uniform worn to show that he was for the people; he was the King of Kings. But in the end he was dragged through the streets, his face a bloodied mask of pain and poison, stripped of the decency of clothing, his bare chest stained with his own blood, begging for his life to the surrounding dogs of war who showed no mercy. A despot’s end. A bullet in the head, perhaps from his own gold pistol. Empty of life, of pain, of the 40 years of oppressing the Libyan people, he lies on a plastic sheet inside a storage freezer, motionless in Mohamed Messara’s graphic image.

I leave Gadhafi laying there and pass an opposition soldier, a man with one leg and crutches, peering down a long empty desert road, the futility of war. What was he thinking? Was there and end to this road? Is this Freedom Road or the Road to Hell? Abdallah caught this frame just as the man passed him.

Allah will know them by the imprint of their hands and foreheads on the desert sand. They fought for liberation and they prayed. A line of rebel soldiers, as straight as the teeth in a comb, their weapons placed before them. This was at the western entrance of Ajdabiyah. Amr Abdallah was there. I stopped before an oversize photograph of a Libyan man whose sunglasses reflected the coffins of men who had been killed after Friday prayers in Benghazi. Amr Abdallah framed the picture in his lens.

The sniper’s bullets were heard and felt on the streets of Sirte. Rebels in makeshift uniforms, black tee shirts and camouflage pants, take cover behind parked cars and pick-up trucks pockmarked by bullets. Mohammed Messara crouched behind a broken car as he shot this photo.

Oil brought Gadhafi wealth and a desire for absolute power. Secret stashes of gold, paper money, real estate in foreign countries, but he used his money not to help the world but to pay for and incite the anger that created events of pain in the world. Now he is dragged like a dog through the dusty streets of his youth. The road to freedom is a hard road.

The Arab seasons of grief and hope. People wandering the surface of normality in the Middle East. It has been ten months. Not much change besides the ousting of unconscionable old leaders.

The acceptance of oppression is a difficult habit to break. The payment is dear.

Shems Friedlander is a professor of practice in the Journalism and Mass Communication department at the American University in Cairo and director of The Photographic Gallery at AUC. He is the director of the forthcoming documentary film, Faisal: Legacy of a King. His other documentary films include, Rumi:The Wings of Love and The Circles of Remembrance. He is the publisher and editor of the journal Zawiyah, Occasional Papers on Sufism. 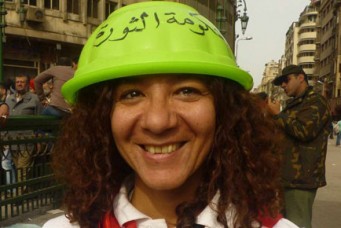