After three days in Amman enjoying a New Year’s break with friends, talking politics with a wide range of Jordanians and other analysts, and reading every parliamentary election poster in sight, I am convinced that if you want to visit only one country to gain insights into the many forces that are shaping our region, Jordan is the country to visit. This is because every single important political, religious, economic, ideological, cultural and civic element from across the Arab world is present and active in the country — including pan-Arab nationalists, narrow Jordanian state nationalists, Muslim Brotherhood mainstream Islamists, more hard-line Salafists, tribal and ethnic forces, private sector globalists, civil society and human rights activists, a deep security and intelligence system, a parliament with limited credibility, thugs who beat up demonstrators, Arabs who engage or shun coexistence with Israel, monarchists and republicans, vocal youth activists, digital dynamism, refugees from other countries, severe economic stress and social disparities, fervent social entrepreneurs, Arab and foreign powers that meddle in local affairs, constitutional adjustments, a few home-grown terrorists, and a coffee shop and café culture jamboree.

The country also is passing through what is probably a defining moment in its history since its establishment 90 years ago in the wake of World War One. All the elements that shape and define the well-being of the state are now in motion and will either reconfigure the country politically and economically or see the existing system persist with increasing tensions and vulnerabilities. Jordan is not facing an existential threat and the monarchy is not going anywhere; the majority of Jordanians complains vigorously, but they get on with their lives and look to a better future through gradual, real reforms and better economic conditions. Nevertheless, the monarchy — along with its key support systems of the political-corporate elite, the security services, and foreign donors — is certainly facing its most serious challenge ever, even more serious than the plots of the 1950s and 60s or the brief clash with Palestinian guerrillas in 1970.

This is because Jordan’s problem today is that three critical groups in the country have been slowly losing faith in the capacity of the ruling elite to manage the country efficiently and equitably, and they are speaking out to demand significant changes in the political and economic management systems. These groups are the tens of thousands of Islamists who tend to be disproportionately of Palestinian origin and live in a few large urban areas; the marginalized rural Transjordanians in places like Tafileh and Maan, who dangerously mirror the same sentiments of vulnerability and fear that we saw in rural Tunisia, Egypt and Syria in early 2011; and — perhaps the most troubling danger sign that the regime must grasp soon — the thousands of educated, dynamic, creative and loyal young professionals from both East and West Bank lineage who have been disappointed by the lack of political reform and economic advances during the last dozen years of King Abdullah II’s reign.

The result of the economic disparities and the parallel political discontent that ripple through the country is mainly evident in a newfound willingness by young and adult alike to speak their mind in public, including most notably crossing former red lines: criticizing aspects of the royal family’s rule and the security services’ involvement in many aspects of people’s lives. Critics and many independent analysts see the king as out of touch and unresponsive, while others close to the monarchy offer much counter-evidence to show that the king regularly meets with locals across the country to be sure he understands the criticisms against him; this includes a series of ongoing small gatherings with the demonstrators who take to the street to challenge him to make real constitutional reforms that dilute the monarchy’s powers.

The king and some elements in the ruling elite have grasped the nature of citizens’ discontent, and are exploring the most realistic and credible way to respond to populist demands. But they have yet to find the key to moving the political system forward into a new balance of power and responsibility between the parliament, the monarchy, the judiciary and the cabinet.

The security system hovers above them all as the ultimate guarantor of state stability, but even the security agencies are facing unprecedented calls by some citizens to refrain from interfering in areas that are not deep security issues (i.e., education, media, and social media) and even to have security budgets scrutinized by the elected parliament.

So this is a good month for the visitor who might visit Jordan to gain insights into sentiments across much of the Arab world, because the parliamentary elections at the end of January have generated public discussions that highlight the very deep demands for reform — while simultaneously clarifying the weaknesses and constraints that still hamper the Jordanian system’s capacity to undertake real reforms.

Reform demands and obstacles in Jordan


If, as I noted earlier, Jordan is the one country that best captures the many contradictory political, social, religious and cultural sentiments that swirl throughout the Arab World, now is the best time to visit Jordan as these sentiments are expressed in public during the month-long run-up to the parliamentary elections at the end of January. Despite the fact that the Islamic Action Front (Muslim Brotherhood party) and others are boycotting the elections, I found myself on a visit to Amman last week captivated by slogans and messages on the thousands electioneering posters on almost every tree and electricity pole of the main cities.

The slogans provide a fascinating window into the minds of candidates, and through them into the mindsets of the citizenry, judging by how candidates emphasize issues that they believe voters care about. My unscientific analysis of the candidates’ slogans reveals a few dominant themes that capture the mood in Jordan, and probably in other Arab countries. These include: affirming the citizen’s right to speak out and shape national policies; a massive demand for (unspecified) “reform” and “change”; a desire for Jordanian national unity and cohesion; greater freedom, democracy and dignity; citizen rights; social justice; women’s rights; a free media; fighting corruption; supporting the Palestine issue; and a prevalent call for citizens to participate in elections and public life if they want to bring about real change.

So why has no Arab country been able to implement serious and credible political reforms that respond to these obvious demands? Despite some reforms and greater public liberties in countries like Jordan and Morocco, core grievances remain strong and widespread (mostly about corruption, abuse of power, inequitable opportunities for under-represented citizens, poor socio-economic conditions, and security sector dominance of the executive and legislative branches).

Jordan is grappling with these issues once again, after the missed opportunity of the first attempt a decade ago to bring about comprehensive reform from the top — through the National Agenda process that King Abdullah initiated but then apparently abandoned due to strong opposition from some Jordanian quarters. Now, the demands for change are emanating more from the grassroots, driven by three simultaneous forces: sustained economic stress especially among marginalized provincial populations, the spillover political momentum of the uprisings in other Arab countries, and citizens’ declining confidence in the king’s and the power elite’s seriousness to bring about real change.

In response to calls for substantive constitutional reforms, my impression is that King Abdullah understands the need to slowly change the system into a constitutional monarchy in which parliament and the cabinet run the government, and the monarch remains above day-to-day politics and is mainly responsible for safeguarding the integrity of the state (including the non-political status of the armed forces, judiciary and religious institutions). Yet he has been unable to respond to the demands for such political reforms because a more representative and empowered parliament is the center of gravity of the apparently unbridgeable gap between the two most powerful populist forces in the country whose demands are diametrically opposed to one another (Transjordanian tribalists-nationalists, and Islamists-Palestinians).

Some powerful Transjordanians reject a fully representative parliament that might see Islamists and Jordanians of Palestinian origin dominate the political-economic system, especially since the Muslim Brotherhood’s base is disproportionately among Palestinian-Jordanians. The Muslim Brotherhood and other leftist or Arab nationalist opposition groups, on the other hand, seek a fully representative parliament that would satisfy citizen demands for equality and credible accountability.

The new election law aimed to make incremental progress on this issue, by expanding the number of seats to 150, including 27 seats elected by national lists, alongside primarily tribal local district candidates. The 27 national list seats seem to be an attempt to achieve two goals: to prod the development of political parties that are not based on local tribal or religious affiliations, and indirectly to redress the chronic structural imbalance that has always favored rural tribal districts and pro-government MPs who are elected on the basis of tribal loyalty.

This election will probably not tell us anything new about Jordan’s capacity to change in response to citizen demands. King Abdullah will soon have to accept the limits of his ability to prod gradual reforms from above, given the sharp differences between the two main political groups in the country. Bold leadership will be required in the near future to override the narrow provincial concerns of both tribalists and Islamists. And instead, it must harness the untapped power of those millions of Jordanians who have gone well beyond Transjordanian-tribal-Palestinian-Islamist identities, and instead desperately seek the comforts and duties of equal citizenship under the rule of law that is equitably applied to all, which has been the key driving force of the Arab uprisings in the past two years. 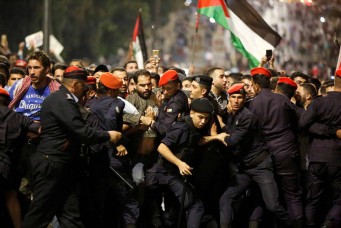 Jordan and the Wider Arab Dilemma