With the Muslim Brotherhood routed, grassroots activists imprisoned or facing arrest, growing media censorship, and repression of journalists and human rights activists, Egypt’s smaller opposition political parties remain one of the few formally tolerated avenues of opposition. However, most of them have remained silent in their dissent, allowing the regime led by President Abdel Fattah El-Sisi to sideline them. The ongoing refusal by these parties to unite adequately and coordinate campaigns against the regime further dampens prospects of substantive political change.

Egypt’s smaller secular political parties entered 2016 with few prospects. Many, most of whom are secular and left-leaning on social and economic issues, failed to win any seats in 2015’s parliamentary elections. The Dostour Party and the Bread and Freedom Party boycotted the elections over their lack of resources and claims that electoral laws disadvantaged smaller parties. The Egyptian Social Democratic Party (ESDP)—a new post-2011 party that emphasizes the importance of youth participation and focuses much of its outreach on university campuses—secured just four seats. Tagammu—arguably Egypt’s oldest opposition socialist party, yet which has long been viewed by workers as an empty shell coopted by the regime—secured just two.

Part of these parties’ failures stem from a broader trend of political disengagement. Indeed, the incredibly low 28-29 percent turnout for 2015’s general election highlighted growing apathy in general. This arises in part from general discontent with Sisi’s administration over increased state repression, economic mismanagement, and ongoing security issues. However, the parties failed to translate popular discontent into votes, especially in the 2015 elections, when many Egyptians feared a parliament dominated by pro-regime parties like the Free Egyptian Party, Future of the Nation, and Wafd—an outcome that occurred nonetheless.

The secular parties are now trying to balance their overwhelming exclusion from parliament while seeking to remain politically active. Their biggest ongoing challenge is their relationship with President El-Sisi and the military-dominated political elite. Under President Mohamed Morsi, collective fear of Islamism and Muslim Brotherhood dominance easily united secular parties in 2012 and 2013 through the National Salvation Front—despite ideological differences among leftists, liberals, socialists, Nasserists, and others. Yet with anti-Brotherhood military man El-Sisi installed, they are divided internally and among other parties on whether to support, remain neutral, or oppose the regime. Most continue to opt for neutrality and tacit support. For example, during the leadership vote for the ESDP in April, two candidates who favor greater opposition to El-Sisi, Farid Zahran and Bassem Kamel, narrowly won—by just four votes out of the 800-member general congress—over their competitors who advocate supporting El-Sisi.

As a result, opposition parties are largely playing the role of “loyal opposition” in Egypt, as they did in Mubarak’s days. They are reinforcing a state that tolerates legal opposition parties but ensures they cannot attain power or threaten the status quo. In turn, these parties recognize their position of weakness and avoid launching anti-regime campaigns. Egypt’s new parliament undoubtedly works in El-Sisi’s favor in this way. It allows him to institutionalize some parties by incorporating them in the formal political arena and distract and divide the leftist opposition which failed to make electoral headway.

One of the few instances of opposition cooperation against El-Sisi is the “Egypt is Not for Sale” campaign opposing the transfer of the Tiran and Sanafir Islands to Saudi Arabia. Nationwide protests that began on April 15 were reportedly the largest in two years and presented “the most significant public challenge” to El-Sisi since 2013. Indeed, Dostour, ESDP, the Social and Popular Alliance Party (SPAP), and Bread and Freedom capitalized by jointly opposing the transfer while demanding democratic reform and condemning police brutality and arrests. However, most parties resisted opposing El-Sisi directly even during this massive outpouring of public criticism, limiting their cooperation prospects of gaining regime concessions.

Partly as a result of this disunity, the “Egypt is Not for Sale” campaign had seemingly fizzled out as of early June, with participant parties again becoming silent. Some camps even vehemently supported El-Sisi and attacked fellow members of the opposition. For instance, Tagammu accused other leftists involved in the protests of participating in “hostile U.S. and Western plots” and fostering national chaos. In contrast, civic organizations took the lead in rallying public protest and presenting a more unified front in the campaign, bringing together journalists, lawyers, trade unions, students, and web activists. As such, the June 21 court declaration invalidating the transfer, a decision the government has vowed to contest, can hardly be attributed to the efforts of opposition parties.

This is not to say there haven’t been other efforts at unity. On March 4, even before the “Egypt is Not for Sale” campaign, former presidential candidate and Popular Current Party founder Hamdeen Sabahi proposed a “Real Alternative” movement made up of smaller opposition parties to counter parliament’s alleged pro-regime bias. Most opposition parties declined to join Sabahi, with the only noticeable participants being Sabahi’s own Popular Current and his former party Karama. The initiative has since lost steam, fearing a potential regime backlash. Sabahi’s public criticism of El-Sisi, ranging from economic mismanagement to attaching personal culpability to the death of soccer fans, likely led other parties to feel vulnerable were they to associate with him.

Such fear is one of several reasons why opposition parties opt for acquiescence and play the regime’s game. Amnesty International notes human rights violations and repression have increased exponentially since 2013, with “authorities arbitrarily restrict[ing] the rights to freedom of expression, association and peaceful assembly.” An ESDP spokesman argued Egyptians “live in a state of constraint on the public sphere, and attacks against civil society organizations.” In May, Dostour drafted a list of members it claimed had been forcibly disappeared, blaming the Ministry of the Interior. Mahmoud Abdelazeem, a member of Dostour’s Ismailia board, was officially arrested, as was Malek Adly, a human rights lawyer and member of the ESDP. Shaimaa Al-Sabbagh, a member of the Socialist Popular Alliance Party (SPAP), was shot dead by police in January 2015. Smaller parties generally fear challenging the regime will unleash further retaliation through increased harassment, arrests, censorship, and even outright party proscription. Many parties are therefore currently prioritizing maintaining good regime relations above developing ideological positions and programs. On the other hand—as in Mubarak’s era—there are also rewards for parties’ obedience, such as being allowed to operate legally and contest elections.

Moreover, opposition parties themselves suffer from political fatigue. Some leftists, traditionally suspicious of Islamists, consider the military the lesser evil and fear that altering the status quo could give Islamists the opportunity to reenter politics. Many have also internalized the violent trajectory of political change in Libya, Syria, Yemen, and Sinai, inspiring fears that any alternative to the status quo would be extremely bloody.

In addition, these parties must contend with potential popular support for the military, which has perpetuated the image of being state guardians since the 1952 Revolution. The parties are also quite aware the military has an unfair hold over Egypt’s politics and economy—despite attempts to obfuscate the issue, the military is estimated to own around 40-65 percent of the Egyptian economy. To attack El-Sisi and the military might be political suicide and would further erode these parties meager support.

While the current calculus for most leftist parties—to remain neutral toward the regime based on fear of the regime and Islamists, as well as popular support for the military—may seem sound for the moment, it presents several long-term risks. As under Mubarak, Egyptians will increasingly perceive these parties as hollow shells coopted by the regime, further eroding their support and membership. Vitriol between parties over their relationships with the regime, as with Tagammu’s attack on the “Egypt is Not for Sale” campaign, will further obstruct cross-party cooperation in the future.

Increased squabbles among parties will distract from El-Sisi’s governing failures, enabling him to further divide and rule potential sources of political opposition. This benefits the regime immensely, especially when the president lacks his own political party that might otherwise be an easier target for direct criticism. If these parties’ “loyal opposition” continues to legitimize El-Sisi’s rule, it will promote his facade of a vibrant democracy and perpetuate a lack of reform.

Christopher J. Cox is a freelance researcher and writer on Middle East affairs. 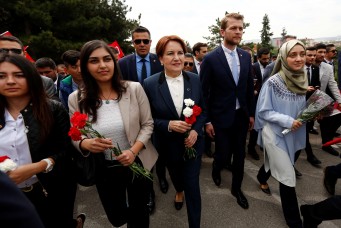