Days after Egyptian security forces entered Cairo’s Giza and Nasr City districts to break up Islamist sit-ins, the country is reeling: tent homes set aflame, puddles of blood, sidewalks charred by artillery fire, and corpses lined in makeshift morgues. The Ministry of Health estimates the death toll to be over 600, with nearly 4,000 injured. The vast majority of the casualties were supporters of ousted President Mohammed Morsi and his Muslim Brotherhood group. In the midst of this turmoil, many Egyptians have shifted their priority from building a democracy to another concern: security.

By the end of one of the bloodiest weeks in Egyptian history, state TV was covering the aftermath of Wednesday’s events with the headline: “Egypt Fighting Terrorism.” The group that the military considers a ‘monolithic threat’ encompasses the very political voices that would contribute to a pluralistic democracy. In a matter of weeks, however, the military has reframed the challenge facing the country. Initially, the military described those demonstrating against Morsi’s ouster as a danger to the country’s political transition. But twenty-one days into the protest, the military began dubbing the Muslim Brotherhood ‘terrorists,’ a threat to the country’s security, with rhetoric against the Muslim Brotherhood culminating in the violent crackdown on August 14.

Simplifying Egypt into the narrow dualism of ‘us versus them,’ the military has re-established a dominant role for itself on Egypt’s political stage, one that has gone largely unchallenged by the Egyptian public.

This isn’t entirely shocking. At the end of June, millions who poured into the city’s squares were eager for security forces to help rid Egypt of Morsi’s increasingly autocratic rule. The military offered assurances that its intervention was only in the interest of democracy-building: to help a new transitional government restore and safeguard the democratic institutions for which the Morsi regime seemed to show little reverence. But millions who voted for him (and even against him), saw Morsi’s ouster on July 3 as a subversion of the democratic process. As many have noted, not all Muslim Brotherhood supporters took to the streets, and not all who protested the army’s intervention were Muslim Brotherhood members or Morsi supporters.

These distinctions are ignored by armed forces Commander in Chief General Abdul Fatah Al-Sisi, whose pictures have been plastered across parts of Cairo over the past six weeks. After the pro-Morsi demonstrations showed no signs of slowing down, Al-Sisi called Egyptians to the streets in late July to give the military a mandate to “confront possible violence and terrorism.” In doing so, Al-Sisi simultaneously grouped all pro-Morsi/anti-military protesters together, and demonized them as terrorists. With such heated rhetoric, the possibility of political inclusion all but collapsed. How could Egypt compromise with terrorists? By the morning after Al-Sisi’s call, clashes between pro-Morsi supporters and the police left sixty-five Morsi supporters dead.

The August 14 crackdown reaffirmed the army’s categorization of the Muslim Brotherhood and pro-Morsi supporters as terrorists. The military positioned them as such a grave security danger that the attack was justified as a pre-emptive measure, which required not just tear gas and birdshot, but also live ammunition.

The events also underscored what voices the military would consider legitimate in the post-Morsi political landscape. In backing the attack, the country’s political leadership encouraged the political marginalization and forceful repression of a group of Egyptians, many who were peaceful and seeking representation of their vote.

Contrast this with Egypt’s 2011 revolution, when the deaths of over 800 protesters strengthened the people’s resolve to protest and push for Hosni Mubarak’s ouster. Two years later, similar numbers of deaths have prompted cheers from many Egyptians. In the aftermath of the August 14 massacre, Egyptians hung a picture of Al-Sisi at the front gates of the mosque at the Morsi sit-in. Even among many of those critical of military rule, halting the pro-Morsi demonstrations has been welcomed with the logic that the military saved Egypt from the ‘terrorist threat.’

The political repercussions will be long-lasting. The government is considering a ban on the Muslim Brotherhood, a move that would drive the group underground and potentially lead it to violent means. Meanwhile, those pro-Morsi and anti-military protesters who do not belong to the Muslim Brotherhood find themselves on the margins in the two-sided conflict. Also sidelined is the interim government. Its leadership role looks increasingly uncertain: in a state of war, people want security, not messy political processes.

The military has sought to make itself indispensable. In constructing a ‘terrorist’ enemy, violent retribution from Islamists, who have been targeted by force, was hardly unexpected. Some even question whether this was military’s plan all along—to push the Islamists toward violence, so as to justify the need for military dominance. Al-Sisi seems ready to take on this leadership role. As he told the Washington Post recently: “I could have just satisfied myself being a minister of defense and turned my head away from the Egyptians and the problems from which they were suffering every day and just left the Egyptian scene to boil. We changed places—the military and the Egyptians. We wanted to give them comfort, to relieve their suffering, and take the suffering on our shoulders.”

As long as the Muslim Brotherhood is considered a danger to Egypt’s security, many Egyptians will see the military as the only force to combat it. In turn, Al-Sisi will be seen as the only leader to keep the country from spiraling into a civil war. It won’t be surprising if Al-Sisi’s pictures continue smiling at Egyptians for a while to come. But a democratic, political solution remains far off.

Rozina Ali is senior editor of the Cairo Review of Global Affairs. Previously, she was an editor at the Economist Intelligence Unit in New York. She has contributed to Foreign Policy, New York Times’ Room for Debate, and Salon. On Twitter @rozina_ali. 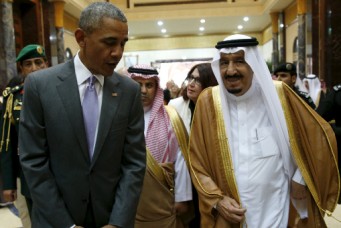 The Terrible Lesson from Egypt 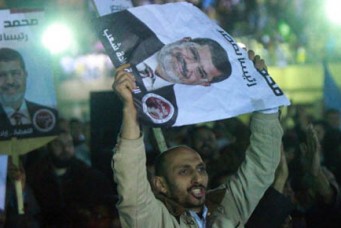