The year 2017 in the Arab world witnessed major developments in the movement for change which had begun eight years earlier. There were intensified international efforts to reach political solutions that were then expected to take shape in 2018. While these developments portend a decrease in military clashes and terrorist acts in countries such as Iraq, Syria and Libya, they also indicate a continuation of conflict in other areas such as Yemen and Egypt’s Sinai.

Outside of the Arab World, Iran, Turkey and Israel complete the whole picture of the Middle East. These countries stand in a position of power with smart administrations, strong tactics and the ability to maneuver to achieve strategic visions. These assets are completely absent from or only partially available to Arab countries in the region.

The reconstruction of Arab societies, through real and comprehensive reform (in the fields of education, economy, justice, governance, and the imposition of the rule of law) has not taken place. The fact that a real beginning of reform has not started is a blow to the movement for change, as it weakens the Arab strategic position at a time when regional balances are being assessed to see who can be a partner and who will be fragmented or indefinitely destabilized.

This situation demands Arab citizens to call on governments to exercise caution. The region is headed toward a new reality and the search is on for the “new regional system,” which will inevitably be established. At this point an honest search for answers is needed.

We must ask Arab governments, or Arab rulers: Do you want to keep fixing the mistakes of the past or do you want to build a new Arab system that is based on a modern vision of solidarity which takes into consideration the elements of the 21st century and the aspirations of our mostly youthful societies? This century will reject and defeat those who remain frozen in a certain mentality or who believe that the 20th century can be replicated.

If the answer to this question by certain Arab leaders is a complete dismissal of Arab solidarity, then we must know why these leaders have decided to put an end to their collective efforts and each go their separate ways in securing their interests and safety.

The following points are ways in which Arabs across the region can work together to achieve a transformation of our shared position in the Middle East, North Africa, and beyond.

One: Whoever seeks the protection of major powers (the United States, the European Union, Russia, or China) will remain exposed because in reality, these powers never care about protecting a weaker country or the weaker country’s interests. Each major power cares about pursuing its own interests and once these interests have been achieved, then the weaker player (i.e. the Middle Eastern state and its rulers) will be cast aside. There are many examples of this. We saw what happened to the Shah of Iran in 1979 and the Arab leaders who were toppled in the “Arab Spring” in 2011. All of these Middle Eastern leaders were thought to be “protected” by the U.S. and other great powers.

Two: Whichever country believes that it can use Israel in a plan or policy against—for example Iran—will discover that Israel is the manipulator and that Iran and Israel may at any moment reach an understanding that totally disregards Arab positions and interests. The possibilities of this happening are clear to all who are aware of the complex ways in which political games are played.

Three: Those who believe that the U.S. holds all cards—or at least most of the cards—in the regional diplomatic game, are mistaken. The situation is no longer the way it was in the 20th century. The cards have been redistributed and several of them are open to being grabbed. The Arab world must obtain some of these cards.

Four: Abandoning the Palestinian cause and claiming that we have more important problems would be a grave strategic error for Arab leaders. Holding close the Palestinian cause can give Arab states important political capital through which fair regional arrangements can be made for the Palestinians and all the Arab World within a peace framework that falls in line with a new regional system. In this regard, we should closely examine the aftermath of Trump’s decision on Jerusalem.

Five: As for Iran, it is a country with a long history in the region. There is no doubt that old and new disputes exist on the Arab-Iranian scene. There is also no doubt that Arabs generally refuse the export of the Iranian revolution to their countries and that the majority of Arabs support the rise of a civil state ruled by a constitution and the rule of law (a state of affairs some in the region believe Iran opposes).

To make matters worse, senior Iranian officials’ recent boasting that Tehran now controls four Arab capitals was negatively received in the Arab world. And yet, Iranian Foreign Minister Mohammad Javad Zarif’s call for dialogue should not be disregarded and should be viewed as a real possibility for peace. Time should be given to determine whether Zarif’s call reflects a change and development in Iranian policy or if it is a political maneuver.

Six: Turkey’s ambitions to restore the power it enjoyed over the Arab world during Ottoman rule is emerging, through a 21st century approach. In this regard, Turkey will be seeking to achieve its interests, which do not necessarily coincide with Arab ones. The Turkish state will use its strong military, as well as employ economic and political initiatives in order to reshape some regional countries and governments.

To this end, Turkey is forming alliances and is being selective in the locations where it sets up bases. It has a military base in Qatar  and a dominant presence in the Sudanese island of Sawakin, putting it in the Red Sea. Ankara has a strategic political stance in the Kurdish regions of Syria and Iraq, and alliances with extremist regional and international organizations, starting with the Muslim Brotherhood.

All of this has been in coordination with Iran and its regional policy. In addition, Turkey is enjoying a positive relationship with Russia and a special position with the U.S. and various other western nations. Given all of this, Turkey has managed to garner special strategic positions that are bolstered by its robust economy—even if President Recep Tayyip Erdogan’s latest policies have raised concerns over the past few years.

In reality, we should be wary of Turkey’s ambitions, especially in regards to its alliance with the Muslim Brotherhood and its efforts to achieve a regional system with an Ottoman or religious identity.We, as Arabs, starting with Egypt and the Gulf, must diligently study Turkey’s actions that make it a force in the Gulf and Fertile Crescent.

Seven: Israel. Our problems with Israel are related to the establishment of a Palestinian state, whose capital is East Jerusalem, ending the occupation of Arab land, and thwarting Israel’s dreams of expanding to the Nile and the Euphrates. The reality is that the 2002 Arab initiative that was launched in Beirut is the key to reaching peace, ending enmity and paving the way for stability in the region.

At this point, we as Arabs should propose a peace agenda that is based on two possibilities—both of which are connected to a realistic timeline and based on transparent international authority. The two possibilities for a lasting peace between Palestine and Israel is (option one) that two-state solution, that is establishing an independent Palestinian state alongside Israel, or (option two), the one state solution, that is a new state that brings together Israelis and Palestinians alike. Israel must choose.

Presently, the Israelis and Americans have made the hope of a Palestinian state, the two-state solution, a mirage for Arabs to chase while Israel colonizes and “judaizes” Palestinian land. The one-state option should be on the agenda of any negotiations along with the option of a separate Palestinian state. We have negotiated over the latter for over a quarter of a century to no avail. Negotiations, should they be held, must be within a timeframe. Once they end and talks of a Palestinian state end, then so will talk of a Jewish state. We can then begin serious discussions on a single state for all Israelis and Palestinians.

I must stress one important note at this point; a united Arab stance, should we reach it, will represent a political weapon that is far greater than allying with this major power or that regional country. No outside powers will harbor good intentions toward the Arabs nor will they sincerely take our interests into consideration.

Eight: Ethiopia is considered a major country in the Horn of Africa, which includes the three Arab countries of Sudan, Somalia and Djibouti. Ethiopia also has strong strategic connections and conflicts with Egypt. One conflict (and possible connection) is exemplified in the Renaissance Dam project and that project’s threat to Egypt’s share of Nile water.

Ethiopia is undoubtedly part of the Arab and Islamic family that spans the Asian and African continents. Common interests should therefore be taken into consideration and problems with Addis Ababa must be resolved, starting with the Nile dam dispute. The dispute should be tackled through a major development and investment operation within a new regional framework.

The above eight points are a brief examination of the rapidly moving regional situation that stands on soft sand and is blown by stormy winds.

There are, however, some glimmers of hope that can only be strengthened through restoring Arab consciousness and having leaders assume their responsibilities toward the current and upcoming generations according to a clear vision of the future. In this regard, it would be best to review the proposal that was made at the 2010 Arab League summit to set up a league of neighbors to study the possibility of creating a regional security and cooperation system in the Middle East.

These proposals hinge upon certain conditions and demands, starting with Iran reconsidering its regional policies and actions, Turkey going back on its Ottoman ambitions and Israel ceasing its rejection of Palestinian rights. Can we as Arabs rise to the occasion?

Amre Moussa is the former secretary general of the League of Arab States and the former Minister of Foreign Affairs of Egypt. On Twitter: @amremoussa. 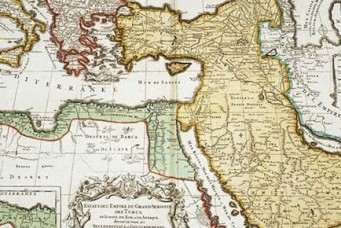