The bloody end to the hostage crisis at In Amenas has led to widely competing assessments as to the wisdom of having so swiftly and violently attacked the facilities to rescue foreign hostages being held by elements of Al-Qaeda in the Islamic Maghreb (AQIM). For the French, for example, this was the only viable option however tragic was the loss of lives. For others, like progressive elements within the United States, negotiations should have been pursued more seriously and with a longer time frame. What both perspectives fail to fully appreciate are the broader national, economic, and security imperatives that dictate Algerian political behavior. Indeed, it is impossible to separate the country’s foreign policy orientation from existing Algerian configurations of power particularly the role of its military-industrial complex.

Despite the presence of formal authority structures operating within a constitutionally-defined system of rule involving elections, parties, and other manifestations of “democratic” governance, Algeria remains under the control, as it has since the coup d’état of 1965, of an intricate complex of military, intelligence, and industrial forces that monopolize state power in both its domestic and foreign policy dimensions.

The ability of Algeria’s intelligence service (Département du Renseignement et de la Sécurité  or DRS), headed by its long-serving General Toufic Mediane, to maintain its supremacy over the country’s political economy is intimately related to its unofficial control of Sonatrach, the national oil and gas company, that provides the bulk of Algeria’s national wealth. During the whole decade of the civil war (1992-2002) involving the military’s savage struggle against an Islamic insurgency that left over 200,000 dead, the security services were able to successfully shield the vast oil and gas operations spread across Algeria’s Saharan expanse against “terrorist” attacks with only one or two instances where facilities and personnel suffered losses. This was not the case in the coastal and pre-Saharan regions where the majority of Algerians reside but where hydrocarbon resources are not found. In these populated areas thousands of innocent Algerians lost their lives in the absence of sufficient military and police protection. This outcome was not accidental as the decision was made to prioritize oil and gas, a relatively secure source of foreign-generated income, over the fate of the country’s citizens whose tax base is miniscule as a percentage of the national budget.

On the political front Algeria remains an authoritarian state despite the introduction and implementation of constitutionally defined structures of governance including a national assembly, an elected president, and a seemingly competitive political party system. Yet all national level decisions involving the country’s “strategic” sectors fall outside the purview of representative institutions and the formal authority of government. This is particularly the case on matters of national security and the control over Sonatrach. In these areas there are no structures of accountability, transparency, or representativeness. Behind the opaque wall of le pouvoir (the military-industrial complex) operates the true reins of power.

It is these two principle features of contemporary Algerian political life that help explain the how, why, and when the Algerian authorities decided to attack the In Amenas facilities. The terrorist assault on one of the country’s central natural gas processing plants posed a direct challenge to le pouvoir’s political and economic hegemony. This then was no simple hostage crisis or terrorist event as both have been and continue to be a regular feature of current Algerian life with AQIM staging frequent attacks throughout the country and often capturing hostages as a way by which to collect ransom and thereby provide the financing for future attacks.

Regional instability (Western Sahara), civil wars (Sudan), ethnic conflicts (Mali), or the disintegration of existing systems (Libya) raise serious questions about the extent that external relations may impact negatively on le pouvoir’s ability to maintain a stranglehold on Algeria’s political economy. As the leading hegemon in the Saharan-Sahelian region of northern Africa, Algeria’s military-industrial complex demands stability which helps explain its consternation over Gadhafi’s downfall in Libya and, initially at least, its opposition to foreign intervention in Mali that might have the potential of compromising its hegemonic status.

The confluence of regional instability spilling over into Algeria itself proved decisive in explaining the military assault on the gas facilities. The “rescue” mission was not to save the lives of hostages or kill terrorists or even prevent damage to gas installations; the mission had a greater imperative—saving le pouvoir itself. To have done otherwise would have raised serious questions about the legitimacy of the Algerian state as currently constituted with its high army command serving as the self-defined defender of the Algerian revolution. Compromising the oil and gas industry would not only have affected the “goose that lays the golden eggs” but would have frightened away future investors and partners in an industry that is being severely challenged by global competitors. Finally, to have acted indecisively on the terrorist issue, for which over 200,000 people have already died, would have deepened the already prevalent view that le pouvoir itself was implicated in many of those killings during the dark decade of the country’s civil war.

John P. Entelis is a professor of political science and director of the Middle East Studies Program at Fordham University.

Stability at All Costs 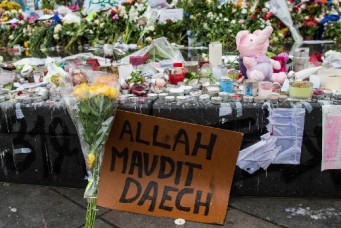 The Leadership Crisis of Nidaa Tounes