Truly historic moments in the lives of political movements occur only rarely, and we may be witnessing such a moment now in the evolving status of Jabhat Al-Nusra, the Al-Qaeda affiliate in Syria. According to the Washington, D.C.-based Middle East Institute’s very able Senior Fellow Charles Lister, who chronicles Islamist rebel movements in Syria at first hand: After five years of growing deep roots in Syria, “Al-Qaeda affiliate Jabhat Al-Nusra recently initiated discussions regarding its plans to establish an Emirate in the northern province of Idlib. Moreover, a number of Al-Qaeda’s most powerful figures have arrived in Syria in recent months, in what can only be described as the covert revitalization of Al-Qaeda’s central leadership on Europe’s doorstep.”

Lister, author of the recently published comprehensive book The Syrian Jihad: Al-Qaeda, the Islamic State and the Evolution of an Insurgency (Hurst Publishers & Oxford University Press), wrote in Foreign Policy magazine that, unlike the Islamic State in Syria and Iraq (ISIS), “Jabhat Al-Nusra actively seeks a level of acceptance from civilians and opposition groups before assuming influence over populated territory.”

If this proves to be accurate—which is likely, in view of Lister’s credible reporting history and extensive personal contacts with opposition Islamists in Syria—it strikes me as a potential critical turning point in Syria and perhaps the wider region. It would mark the first time that a militant “jihadi” group sought to govern territory and achieve sovereign control with the acquiescence or even partnership of local forces and popular institutions. This will tell us much about several related dynamics, or political actors, in the region today: popular discontent with prevailing governance systems and living conditions, the vulnerable incumbency of existing state or local authorities, the erratic status of mainstream secular or nationalist opposition forces, and the power and local anchorage of militant Islamists.

Al-Qaeda is now one of the oldest and most established militant Islamist groups in the world, with battlefield and civilian governance experiences in over half a dozen countries spanning nearly thirty years. Its early attempts to establish sovereign control in various countries did not succeed, mainly because it imposed its harsh rule on local populations without first eliciting their acceptance. In the past few years in Yemen, it has modified its approach to sharing in authority by working with local tribal forces to in existing governance councils, courts, welfare systems, and other institutions that citizens seek in an orderly and reasonably fair society. Jabhat Al-Nusra’s novel Syria experience combines its proven battlefield capabilities with a relatively low-key, gradual approach to imposing hardline Islamic rules on an acquiescent society.

Seeking local agreement for an “emirate” where Al-Qaeda is the main political force will test citizens’ and other rebel movements’ willingness to accept its leadership role in creating a new political entity that formally separates from Syrian state rule. It will also test its own ability to be more pragmatic and collegiate in achieving the emirate status it seeks, by responding to the concerns and desires of the people in its areas of operation.

This is significant in terms of Syria today, but also for our entire Arab region during the past half century or so, given that the rise, occasional retreat, or defeat or banning of Islamist political movements across the Arab World has been perhaps the most significant single, consistent, and pervasive political identity development since the mid-1970s. Most Islamist attempts to achieve incumbency and sovereignty in Arab countries have failed, whether through democratic elections as in Egypt and Tunisia, or by imposed rule as in Iraq, Somalia, and elsewhere.

We may be witnessing in Syria the latest attempt by Al-Qaeda to learn the lessons of its own missteps and try to achieve legitimate incumbency through a more consensual political process that builds on its proven military capabilities and its anti-Syrian government stand. This necessarily requires Jabhat Al-Nusra to take into consideration local people’s demands, and to negotiate relationships that respond to both sides’ priorities. This consultative approach contrasts sharply with ISIS’ harsh, imposed rule-by-force. Its success or failure will provide important insights into the mindsets and capabilities of the local population, the other rebel groups, and the Syrian government.

A new front seems to be forming among the many other battles taking place in Syria, this time pitting the local population’s legitimate acceptance of Al-Qaeda governance against either a total rejection of this, or a modified form of shared governance with other local actors. The success or failure of this process merits close monitoring, because it could have implications elsewhere across the Arab World, where many incumbent but incompetent or brutal governments are being challenged by an assortment of Islamist, tribal, nationalist, and secular groups, including both non-violent groups and armed rebel movements. 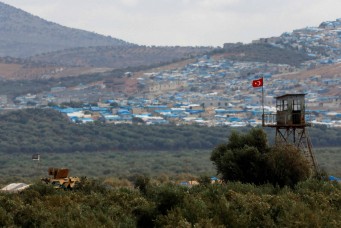 Will We See Two Islamic Emirates in Syria Soon?