Cairo Review Contributing Editor Sydney Wise sat down with Dr. Denis Sullivan, who currently acts as Dean of the College of Humanities and Social Sciences at Zayed University and is Director of the Boston Consortium for Arab Region Studies.

This is part two of a two-part conversation. In this episode, Sullivan discusses what can be expected from U.S. President Joe Biden’s foreign policy plans in the Middle East.

Cairo Review: One thing we are interested in is whether this reopening of aid toward Yemen that is entailed in the un-designation of the Houthis as terrorists—if that is what happens out of this review—whether that speaks to a real commitment on behalf of the Biden administration to addressing these humanitarian crises, or is it simply another Trump foil?

Denis Sullivan: Officially they talk about human rights and diplomacy as kind of their calling card. So, in other words, it’s not “dealmaking”, it’s not “Deal of the Century”, it’s not that kind of thing. I mean, even to the point of bringing in Samantha Power as America’s ambassador to the UN under Obama, and now to come in to head up USAID. And not only that, I think this is where he’s really putting the power behind his decision; it’s not just a one-off “oh, we’re naming a woman”, “we’re naming this wonderful former ambassador to the UN as USAID”. He’s also elevated the position of USAID Director to the National Security Council on a permanent basis, and that means USAID, development; State Department; Defense Department are all—again, nominally—at the table with equal voice.

Now, we know that, you know, when crises erupt, everyone will turn to the Defense Department first to say “ok, what do we do here, we’re in a crisis”. And the State Department, kind of, it’s almost in that order. By having USAID there, also an equal voice, we can say: “ok, we can coordinate with the military and the State Department.” You know, humanitarian aid agencies, I just mentioned the Houthis, you know, they’re working with militaries on-the-ground. They’re working against militaries also to make sure those outside military forces don’t bomb them as they’re trying to deliver food and humanitarian aid, medicines, et cetera to these communities.

So that is, I think, it’s a wonderful move. It’s almost a beautiful move. It’s beautiful in that sense that they’re putting USAID, i.e. humanitarian and development aid, on par with diplomacy and military strategy so they can strategize together. It’s almost like… think of the pandemic in the United States. We can use the National Guard to mobilize forces. That doesn’t mean we’re under martial law; it means we can use the logistical power of the National Guard at home just as we can use the logistical power abroad to work in tandem with development aid, with diplomats as well.

CR: What are a couple of main priorities for the Biden administration in the Middle East, whether that’s strategic relationships with certain powers or whether it’s hot-button issues like the Muslim Ban, Yemen, et cetera?

DS: Well, let me throw Turkey into this as well, because our relationship with Turkey certainly also has both soured and…  I can’t say it’s improved… Trump had a good relationship with Erdogan, as Trump had with many autocrats. The United States’ relationship with Turkey, a NATO ally, suffered as a consequence because it became just another one of these transactional relationships. And Erdogan had a way of calling Trump up, as you know, and just never kissing up to him but certainly assuaging his ego, you know, stroking his ego, and certainly, whatever Turkey wanted.You know, like invading northern Syria and occupying northern Syria, and eliminating American support for the Kurds, who were our top ally against ISIS.

And so I think we need to do a lot of resetting. And by this I think, you know this gets back to—Biden doesn’t have an agenda. Trump had an agenda: it was all about Trump. It was about his ego, about his money, about his children, about his friends; as long as everyone was making millions of dollars and Trump got his name on a big building somewhere, that’s all he cared about for American foreign policy.

I think with Biden, he’s resetting that, but I don’t think he’s going to favor any one country over another. As I say, Israel won’t be in disfavor with the United States—Saudi Arabia, Emirates, Egypt, they won’t be in disfavor—but nor will they be elevated higher than any other states in the region. So, again, I’m not naive here thinking that Joe Biden is just this rational, objective player, but he’s… what we see is what we get with him. His moderate tone, his moderate views; yeah, he’s shifted a bit left in his politics, but again, I think that also comes with the learning of, you know, where he was as Vice President, where he was as a senator, where he was in previous iterations of being a political candidate for president.

And now we’re in a pandemic, and now we’re in a disastrous state around the world, so his strategic approach is to reset our alliances, reengage our allies; that includes NATO generally, it includes Turkey in this Middle Eastern context. I do think he will keep the Israelis and the Saudis and the Emirates and the Egyptians, saying, “look, you guys are strategic allies. Absolutely. But, we’re going to go ahead with this Iran deal. We’re not going to then favor you with support for another war, a disastrous war, but we need to all kind of get on the same page”.

We know Iran’s not a boogeyman, but Iran is also not a friend—Iran is never going to be an ally under these conditions—but Iran is a powerful force. Iran has been shaken but not destabilized politically. These sanctions haven’t toppled the regime, so let’s try another tack. Let’s get back to this nuclear deal, with modifications. Yes, we want them to stop supporting the Houthis, stop supporting Assad of Syria, stop supporting Hezbollah, stop supporting Hamas; that ain’t going to happen right away, for sure, but Biden takes the long view on that. Reestablishing our American objectives; I mean, talk about America First! This is American interests in alignment with our allies, which, again, Trump couldn’t take that second step. He couldn’t keep two thoughts in his head at the same time, whereas Biden can play three-level chess at least. Strategically at home and strategically abroad; strategically with our enemies and also strategically with our allies. I mean, don’t lose allies; Biden’s coming in to strengthen alliances and strengthen partnerships.

So that’s why I think Saudi Arabia… got nothing to worry about. Israel, Egypt, yeah, there’s going to be pushback. There’s going to be more of a knock on the door saying, “hey, why do you have so many political prisoners?”

We’re going to do the same to Russia. I mean, we already see it in Navalny. Navalny is a topic of discussion between Biden and Putin. Good!

Is Biden going to change the world in one hundred days or one thousand days? Probably not. Can he move us toward changing the world? I hope so! I mean, again, I’m not naive. I’m hopeful, I’m optimistic, and I’m also realistic. You know, I’m all of the above. We have to be all of these things at the same time.

Denis Sullivan is the Dean of the College of Humanities & Social Sciences at Zayed University in Dubai, United Arab Emirates. He is also a professor of Political Science and International Affairs and the Co-Director of the Middle East Center at Northeastern University since 1987.

Biden Negotiating the Balance of Power 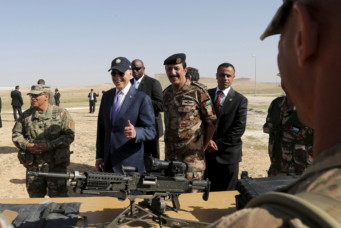 Does the Biden Administration Have Time for Foreign Policy?

What Should Arabs Expect from a Biden Win?