Now more than any time in recent memory, the Arab World as a political entity is confronted with ominous threats and hair-raising domestic and regional challenges. The Arab national identity is being tested by the natural forces of change: demographics, globalization, and interdependence on the one hand, and extremist ideologies on the other. Arab economies and security are also over-dependent on foreign powers or stakeholders, which makes the Arab world prey for conflicting influences and interference. Arab apathy and a diminished inclination or ability to deal with problems further exacerbates the challenges. And, a pattern of bad governance and misguided policies marginalizing or discriminating against ethnic minorities has generated domestic turbulence and fissures in the social fabric of Arab society.

As the largest nation in the Arab World and heir to a long and proud history of leadership, Egypt is best suited to address these new challenges and dynamics. What is needed from Egypt is vision: not only on how to build a better future for this great country, but for the Arab World in its entirety. She can offer a model of the social and cultural contributions of good governance and a more equitable and stakeholder-friendly social contract between state and citizen. To be effective, the vision should entail a strong regional compact between the Arab nations towards addressing our common challenges. In this role, Egypt, the oldest nation state in the region, and the traditional beacon of Arab society, carries the responsibility of defining the future of the Arab World.

The first message in this effort should be directed at domestic and Arab public opinion, and would be most effective if articulated at the Egyptian presidential level. The message should highlight the risks of present and future challenges, emphasize the inevitability of cooperative action between the Arab nations, and affirm the imperative of preserving Arab identity. Above all, it must commit the full strength of the Arab World to meeting these challenges and preventing the potentially catastrophic consequences of the attempts to re-demarcate the Arab region.

The recent events in Iraq, Syria, Libya, the Gaza Strip, and Yemen are portents of a stormy future for the region. Yet, before we can turn our attention to Arab peoples outside our borders, we must begin a dialogue about the principles that should govern us internally. These principles must aid in building a better future, by eliminating the risk of polarization, sectarianism, and religious extremism that so threaten the Arab World today. At the same time, these principles should generate new ideas about how to reconcile the Arab national identity with respect for the culture and character of the region’s minorities of different ethnic origins. The principles take into account the need to confront extremism robustly but wisely. In pursuit of such principles, I propose the following:

—That the heads of the stable Arab countries hold separate national dialogues between their peoples.

—That these states then provide the results of these dialogues to the Arab League to be monitored, coordinated, and recorded whenever possible.

—That the Arab League thereafter draft a document or declaration of the Arab World Citizen, calling on its members to respect the national state, the unity of its territory, and its sovereignty, while doing so incorporating principles for the protection of the cultural, personal, and social context of national minorities in the state.

—That the Arab World review this document every ten years in order to preserve the progress of societal change.

—That an urgent and joint meeting between the Arab states’ respective ministers of the interior and justice be held to develop better cooperation with respect to the issue of terrorism, regardless of political differences elsewhere, a proposal previously endorsed by the Council of Arab Foreign Ministers at the beginning of 2014, and later at the Arab summit in Kuwait. Terrorism of the most dangerous sort sows poison and division amongst us, creating a cancer that cannot be ignored or eliminated by tactical individual responses.

—That a meeting be held between the leaders of the Arab intelligence agencies and ministries for better consultation and exchange of information about extremist movements and develop ways to confront them.

—Finally, it is also important to facilitate dialogue between Arab intellectuals and elites regarding the best educational and cultural paths to confront extremist ideology.

It is an understatement to say the Arab World is at risk. We have a national and moral responsibility to redirect and correct the political rudder of our homelands, to embrace our common roots and ties, and build a durable, just, and stable international polity inclusive of the Arabic-speaking world. We must ask ourselves: Which model of Arab civilization will produce the states we want to live in? My conclusion is that these states should be:

—Modern national, democratic, pluralistic states, which do not discriminate between citizens.

—Legitimate states that respect and adhere to domestic and international law as an authority upon us and others, without discrimination or exception.

—Independent states, which believe in the need for strong relations with the different nations of the world, provided they respect our rights and interests.

—Active states interacting with the international system, working towards greater involvement amongst the Security Council as well as international economic organizations in order to ensure the rights of developing countries.

—Wise states which carefully maintain their natural resources, and develop strong positions and initiatives regarding environmental degradation and the use of such resources as energy and water.

—Humane states which respect the rights of minorities, women, and children.

—Sovereign states which will not be deterred in pursuing their self-defense and national security, yet at the same time seek to secure collective security on a regional basis and to resolve disputes by peaceful means.

The Arab World faces a critical choice: To embrace progress and move forward, or slide into a societal and political abyss that will destroy the Arab World as a political entity and erode its societal identity.

Nabil Fahmy, a former foreign minister of Egypt, is dean of the School of Global Affairs and Public Policy at the American University in Cairo 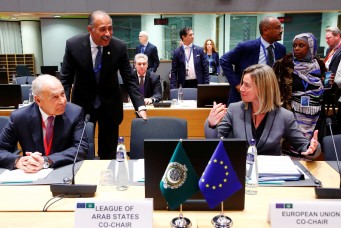