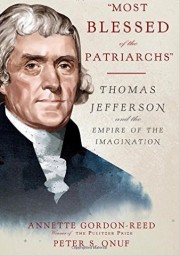 “Most Blessed of the Patriarchs”: Thomas Jefferson and the Empire of the Imagination. By Annette Gordon-Reed and Peter S. Onuf. W. W. Norton & Company, New York, 2016. 400 pp.

I spent the last few days before the election of Donald Trump in the company of Thomas Jefferson. As the Founding Father with the greatest contribution to the U.S. Declaration of Independence, Jefferson left a special mark on American ideals. As an eloquent theorist of liberalism, and at the same time one of the largest slave owners in the American South, he was a controversial man (some would say a hypocrite). In his years as minister to France, Jefferson, despite his limited command of French, immersed himself in European culture, particularly music, theater, and his lifelong obsession, architecture. But he rejected post-Renaissance European values; he abhorred Europe’s relaxed mixing of the genders and races, lack of reverence for patriarchs, and liberal sexual attitudes—interesting for a man who, in his forties, began a liaison with a 16-year-old slave, who was the half-sister of his deceased wife. Jefferson wanted his young nation, America, to absorb the heights of modern European culture and reject the old continent’s moral descent. He was the effective founder of America’s conservative party—which he envisioned as the beacon of liberal ideals in the nation that was to become “the shining city on the hill,” the refined example the rest of humanity would look up to—and in whose spirit Donald Trump ascended to the presidency some two hundred years later.

My journey with Jefferson was guided by Annette Gordon-Reed and Peter S. Onuf, authors of “Most Blessed of the Patriarchs”: Thomas Jefferson and the Empire of the Imagination. This is neither a biography nor an analysis of Jefferson’s legacy. It’s a voyage into the man’s thinking through his papers, letters, and actions. The authors eschew chronology; we jump between different stages of Jefferson’s life. Our markers along the way are the themes the authors reckon dominated Jefferson’s thinking, shaped his views, and directed his choices.

Slavery is the most important of these themes. Gordon-Reed and Onuf devote a quarter of the book to dissecting the flagrant contradictions between Jefferson’s writings on liberty and his ownership of slaves, including ones who almost certainly were his own sons. The objective is far from condemning the man; these are authors who, after decades of studying Jefferson, are clearly in awe of their subject. Yet their admiration and strong feeling do not lead them to rosy assessments. They do not hide behind ascribing his actions to the mores and traditions of the time.

Though they repeatedly say that Jefferson was a product of his time and environment, they make it clear that he repeatedly chose to ignore the winds of change; often, they hint, he lacked the courage to lead, in action, the changes his ideals and writings advocated. The authors stop at the several moments in his life, most notably his years in Paris at the cusp of the French Revolution, in which he clearly saw that the world was moving beyond the social order into which he was born. And yet invariably, in these moments, Jefferson ignored the opportunity to ride these waves of transformation. He saw that slavery was both an illness that resided in the then-nascent American sociopolitical system, as well as a source of future conflict between the slavery-opposing northern states and the southern ones whose economies depended on it. But he shied away from fighting it.

Here presenting Jefferson’s foresight about the future of the political project (America) that he helped shape transcends the ills of the institution of slavery. This discussion casts light on the paths that Jefferson saw as potential routes for the new country: to continue being an extension of Britain, but on a grander scale; to pursue a “continental” (European) identity—becoming a Europe, rather than a Britain on the other shore of the Atlantic; or—the choice that he strongly believed in—to make tangible the ideals and aspirations of the settlers who left Europe, crossed the ocean, and sought to create a new form of society in this new world. We read about America’s “mission” (the ideals that “the shining city on the hill” embodies), what it has to achieve, the pitfalls it should avoid, and the perils (in the early nineteenth century) that could diminish the promise of that mission. Reflecting on these routes that the American Republic could have taken, and comparing them to what actually happened in the ensuing two centuries, would tempt many readers to leave Jefferson’s thinking, for a bit, and look at the Republic’s actual legacy and its state today.

Gordon-Reed and Onuf show us the evolution of Jefferson’s thinking about America’s place in the world, the prospects of expanding the Republic westward (with all the political, economic, military, and moral challenges associated with that expansion), and interestingly how or whether religion—and early Americans’ understanding of the divine—fits within what the Founding Fathers thought of the meaning of America. Is America “blessed by God?” Isn’t that a perpetuation of a form of religious thinking that America, supposedly, repudiates?

Often, when it comes to sensitive issues such as Jefferson’s own beliefs, the authors leave it to Jefferson to explain himself. Jefferson’s words on religion, the nature of God, the meaning of the message of Jesus, and the role of religion in society are intriguing; he shows us how he mixes disciplines, ideas, and experiences to form complex, and by the standard of his time, innovative definitions and understandings. But he does not explain himself fully, and certainly does not reveal the inner core of his beliefs. As much as he was clear and unequivocal in drafting the Declaration of Independence, Jefferson was abstract and elusive when it comes to his personal beliefs. He takes you on an intellectual tour, but there isn’t a specific destination. It is likely that Jefferson the politician (thinking about his positioning, before and after his presidential terms) was concerned about the harm that Jefferson the thinker could do to himself.

Gordon-Reed and Onuf situate their presentation of Jefferson’s views on religion in a section they call “The Enthusiast.” Jefferson was hardly an enthusiast when it comes to faith. Relative to other Founding Fathers, especially the two he is often associated with—George Washington and Alexander Hamilton—Jefferson was not overflowing with political fervor or passion for any ideology. His defining characteristics were his intellectuality and consistent preference for reasoning and argumentation. Perhaps the enthusiast in Jefferson was fired up by culture and the arts. This is the section in which the authors introduce us to Jefferson the lover and critic of music and architecture. Based on what they tell us, his taste was highly refined, though limited. He knew what he liked, stuck to it, and sought it performed by the best in class. And if those were in Europe, he would grudgingly admit that, in the world of art and culture, Europe was far ahead of his young country.

Architecture was different. Jefferson approached it not just for indulgence and transcendence, and not just as a form of science and art, but as one of the most influential ways to manifest certain values and to project power. The authors devote big sections of the book to examining how he designed his estate in Virginia, Monticello, how separated his private quarters were from the rest of the mansion, which was almost always swamped by visitors who came to listen to the “great man,” and what those design preferences reveal about his character. But the important factor in this discussion is how he combined his views of what America means, the significance of the political project that he championed, with what he absorbed of the French (and by extension, the European) usage of architecture to demonstrate power. This is an intriguing discussion, even for readers familiar with Jefferson’s writings and with the history of America’s formative years.

Gordon-Reed and Onuf resist casting a judgment on Jefferson. Many, after reading tens of thousands of words on the man, the politician, and the thinker, would find that disappointing. After the many contradictions, ascent to greatness and descent to depravity, and vague expositions hiding as much as they are revealing, readers would want a conclusion and closure. But I think the authors’ approach is wise. The book is not a trial of Jefferson. It is a voyage into his mind. Readers with a penchant for philosophy, appreciation of the complexity of human thinking, sympathy for failings and weaknesses, and admiration for cultural refinement will enjoy this journey. They will get an understanding of, rather than a verdict on, one of the finest minds in the late eighteenth and early nineteenth century.

Tarek Osman is the author of Islamism: What It Means for the Middle East and the World and Egypt on the Brink. He has been the writer and presenter of several BBC documentary programs on the Arab and Islamic worlds, most recently Sunni-Shia: Islam Divided. He is the senior political counselor for the Arab World and Turkey at the European Bank for Reconstruction and Development. On Twitter: @TarekmOsman.

Is Europe Facing a Crisis?

The Arab League and the European Vision