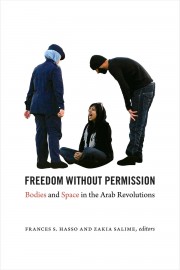 As an American woman and political scientist who has found herself living in Cairo six years after the 2011 uprising, I have found my perceptions of the Arab Spring frequently and viscerally uprooted. Having watched the events unfold through Western network television, it is by now banal to point out that the two narratives that dominated coverage of the uprisings were those of women and social media as the driving forces behind calls for democracy.

Freedom without Permission: Bodies and Space in the Arab Revolutions is an example of the burgeoning literature reexamining the Arab uprisings that seeks to challenge both outsiders like myself as well as people who lived through these events. Rather than dismiss the twin narratives of women and social media, it seeks to disrupt and authenticate them by engaging them on their own terms rather than through the Western gaze.

As the title indicates, the contributors to this edited volume focus on the nexus between women’s bodies and the various spaces, both physical and digital, in which the revolutions took place. In the introduction, the book immediately does away with the conventional definition of revolution, which the editors locate in the social sciences, as “transformed states and overthrown leaders.” Instead, the focus is on the “revolution” that took place in the spaces that the uprisings opened up for new forms of expression such as blogging and public squares. In short, the volume reads as an ethnography of micro-revolutions not through the disruption of the state’s monopoly on force, but primarily through women breaking men’s monopoly on space.

Freedom without Permission covers these areas, with each chapter presenting an example from a different country. Two chapters specifically focus on blogging and challenge the Western narrative of the “Facebook revolution” by exploring blogging as a more personal and flexible, but not wholly democratic or safe, medium for women’s expression. The first chapter by Sonali Pahwa centers around the use of personal blogs by young Egyptian women as they publicly struggle with their identities as feminists in a socially conservative environment, even before the eruption of protests in Tahrir Square. Although focusing on blogs reifies the digital component of the uprising that is so elevated by Western analysts, it also adds a layer of complexity by revealing the charged relationship between real and virtual public spaces. For example, a blogger named Fatema describes in vivid detail incidents of sexual harassment on the streets through her blog, and uses her online voice to respond to these incidents in a way that would have been impossible in person—or offline. Her blog opened up opportunities for frank discussions on sexual harassment, while simultaneously provoking intimidating and threatening comments in reaction.

Blogging also features heavily in the penultimate chapter by Karina Eileraas, which focuses on a particular Egyptian blogger, Aliaa Elmahdy, who posted a nude selfie in 2011 to show her despair over the direction the uprising was taking. Intense reaction to her photo caused her to flee to Sweden where she was granted asylum. Similar to the chapter by Pahwa, Eileraas weaves a complex web between Cairo as a “space of paradoxes with respect to women’s bodies,” not dissimilar to the paradoxes women experience online who are finding new subversive platforms to express themselves, albeit ones paired with intense sexism.

The chapters that fall in between take the reader from Tunisia to Yemen, from Bahrain and Saudi Arabia, and interestingly, even to Istanbul’s Taksim Gezi Park. For a book that from the outset rejects a notion of revolution rooted in the nation-state, it cannot help but be organized along those lines. This is not so much a shortcoming as it is a reflection of the political geography throughout the region: state borders, representing real and hard spaces around which much of people’s daily lives are organized, and other structures such as Islam, pan-Arabism, gender, and digital diasporas, complement as much as they compete with one another. While it is true that political scientists such as myself aren’t equipped to deal with sub-national spaces, it is also a bit wanting to ignore the territorial nation-state—a space that, for better or for worse, is the most potent power structure in the world today, and the main target of the calls to revolution.

There are two chapters, however, that do take nationalism and the state seriously. In Lamia Benyoussef’s chapter on Tunisia, she discusses in detail how gendered symbolism figures prominently into Tunisia’s post-revolution nation-building. Specifically, she reveals how emasculation came to stand for the failure of the state to provide basic needs and services; thus, the need for regime change. Scholars of Western revolutions have noted similar patterns of associating male humiliation with calls for revolution.

Additionally, the final chapter by Banu Gökariksel argues that the Gezi Park protests naturally followed the Arab protests, and addresses the same motif of women asserting new voices and identities in public and online spaces. The author contrasts the Taksim protests that took place within a shifting democracy to the autocracies in the Arab region. The other chapters could have benefitted from a similar transnational comparison.

Freedom without Permission challenges the concept of the “nation-state” as an analytical category, but the deliberate disengagement of the digital and gender revolutions from those of the state is a missed opportunity. Despite this, the chapters can be read as stories of nation-building on the micro-level—of people asserting themselves often in defiance of state power. During calls for regime change, nation-building is at its most robust. Not only does the state have opportunities to reimagine itself, but so do non-state actors, as this book so clearly demonstrates. Those who lived through the Arab uprisings will definitely appreciate a reading of the revolutions that corrects much of the Western misperceptions surrounding the role of women and social media. But they may also feel that there is still so much more to be said.