Forty years ago, I brought together President Anwar Sadat of Egypt and Prime Minister Menachem Begin of Israel for peace talks at Camp David. After thirteen days of difficult and intense negotiations, we emerged with “A Framework for Peace in the Middle East,” better known as the Camp David Accords. This required courage and sacrifice on the part of the signers, Sadat and Begin. It was a significant achievement for peace and changed the reality of the Middle East.

During the years since the signing, I have often written and talked about what happened at Camp David. I have described how the peace process evolved from there and how it could continue to develop. I have celebrated successes and bemoaned departures from the framework to which we three had agreed. In recent years, the departures have seemed more significant than the successes. Conditions in the Middle East have caused many to despair. Nevertheless, I continue to stand by the title of the book I published in 2009, We Can Have Peace in the Holy Land.

I cannot say that I am optimistic about the immediate future, but I have seen near- impossible challenges overcome in the past. In the thirty years before the meeting at Camp David, Israel and the Arab states had fought four major wars. When I began my presidency in 1977, I was determined to seek a comprehensive peace settlement. To me this meant bringing Israel together with all the Arab states and with representatives of the Palestinian people. None of the Arab states then were willing to officially acknowledge Israel’s right to exist. While Israel wanted to negotiate with the Arab states, it was unwilling to recognize the Palestine Liberation Organization (PLO) as the representative of the Palestinians. It saw the PLO as a terrorist organization dedicated to its destruction.

When my administration began our work on the Middle East peace process, Israel was still occupying territories that it took in the 1967 Six-Day War. This included Egyptian and Syrian territories as well as Palestinian lands that had been governed by Egypt and Jordan before the war. Following the Six-Day War in June 1967, the UN passed Resolution 242 on November 22 of that same year which called for a “withdrawal of Israeli armed forces from territories occupied in the recent conflict” and “termination of all claims or states of belligerency and respect for and acknowledgment of the sovereignty, territorial integrity, and political independence of every State in the area.” This provided a simple formula for negotiation of land for peace. However, the future status of the Palestinian people was not clearly stated in the resolution. Resolution 242 only stressed the necessity of achieving “a just settlement of the refugee problem.”

At a town hall meeting in Clinton, Massachusetts on March 16, 1977, I explained how I saw the Palestinian issue saying, “There has to be a homeland for the Palestinian refugees who have suffered for many, many years.” This needed to be part of a comprehensive peace settlement. However, my hope of bringing all parties together was frustrated for months. The breakthrough finally came from President Sadat, who went to Jerusalem to offer peace to Israel in November 1977 and then came to Camp David in September 1978 for the thirteen days of negotiations. The Camp David Accords provided a framework for further negotiations along three tracks. First was a plan for the West Bank and Gaza that would lead to a resolution of “the Palestinian problem in all its aspects.” Second came the bilateral peace process between Egypt and Israel. Third was a list of principles and provisions that should apply to peace treaties between Israel and all its neighbors.

The subsequent negotiations between Egypt and Israel led to a treaty of peace in March 1979 that has survived for nearly forty years. During the remainder of my administration, the process for the Palestinians to achieve autonomy did not advance, nor did the peace process for Israel’s other neighbors. I was disappointed by the incomplete success but continued to work for peace through The Carter Center, a nongovernmental organization that my wife and I established in Atlanta, Georgia in 1982. We have witnessed and contributed to successes since then. The Oslo Agreements led to the establishment of the Palestinian Authority and a peace treaty between Israel and Jordan followed. Other Arab states also indicated their willingness to negotiate.

However, today the situation is less hopeful. Israel has increased exponentially its takeover of the West Bank, seizing Palestinian land to massively expand settlements. A single state dominated by Israel has become the de facto reality in which the Palestinians do not enjoy equal rights.

Among all Israeli governments I have known, the government of Prime Minister Benjamin Netanyahu offers the least encouragement to Palestinians for negotiation. The U.S. embassy move to Jerusalem in May 2018 was particularly unhelpful. Netanyahu says he still favors a two-state solution, but due to Israel’s encroachment on the West Bank and its policy of creating facts on the ground, the Israeli government has made it almost impossible to accommodate a Palestinian state. Yet, we await a peace proposal promised by U.S. President Donald Trump. I believe that the United States remains potentially the most important outside actor in the peace process, but there is good reason to be skeptical that the present American administration’s proposal will be fair to all. Nonetheless, I hope I will be surprised.

I find it deeply unfortunate that after Camp David no other Arab state supported Egypt in its effort for a comprehensive peace. Some Arab leaders have told me that they regretted not supporting Camp David. When I became acquainted with PLO Chairman Yasser Arafat, he told me that the worst political mistake he made in his life was not supporting the Camp David Accords, because the accords gave his people everything they could have wanted at that time: full autonomy, control of their own affairs, and complete withdrawal of Israel from the Occupied Territories. Today Arab leaders are divided more seriously than at any time during my public life. This division among Arab leadership makes negotiations with Israel especially difficult.

What needs to happen to fulfill the goals of Camp David? I dream of an Arab leader who, like Anwar Sadat, has the courage and determination to serve as a catalyst for change. I dream of an Israeli leader who, like Menachem Begin, realizes the extraordinary benefits that peace would bring to Israel. Meanwhile, I will ask that leaders and scholars explore alternatives to what has been proposed in the past. I still believe in the two-state solution, but if a two-state solution is impossible, what should follow?

The Carter Center will continue to work for peace in the Middle East. I believe that the people of Israel and Palestine desire peace. I have faith that someday it will come.

Jimmy Carter served as the 39th President of the United States and later founded the Carter Center. He was the recipient of the 2002 Nobel Peace Prize. 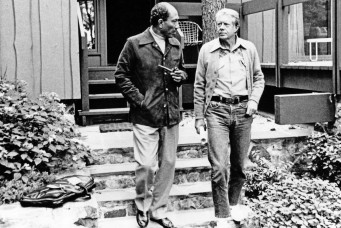 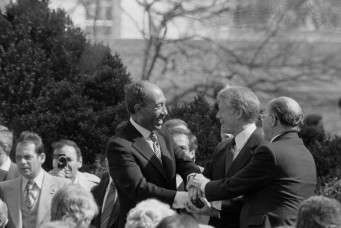 Catastrophe Ahead After Peace Talks Collapse