At a workshop this week at the Radcliffe Institute at Harvard University, I have had the pleasure of engaging with colleagues from the United States, Europe and the Arab world on the question of how scholars can study current developments in “civil society” in the Arab world during this historic moment of uprisings, revolutions and change. One of the fascinating aspects of the discussions that quickly became clear was whether we could accurately use a term like “civil society” in the context of the current situation in Arab countries.

I suspect we may need to rethink some of the basic assumptions that have always shaped our understanding of how political change happens, given the many new developments underway. Not only do we need to acknowledge the monumental scale and nature of the political transformations underway across many Arab countries, we must also demand a change of equal magnitude in any indigenous or international attempts to understand those changes and engage with them, whether as academics, activists, officials, or any other interested actor.

The notion of “civil society” has long been understood as referring to those associational activities that citizens engage in voluntarily in that vast public space between the state at one end and the individual citizen or the family at the other. Civil society includes phenomena like non-governmental organizations, professional associations, the mass media, single issue lobbying organizations, political parties, and many other such groups that advocate policy issues (like human rights protections) or just represent the best interests of their members.

One of the profound developments now taking place in the ongoing Arab uprisings and transformations is the breakdown of these neat categories we have long used to understand and analyze political life. The most dramatic manifestation of this that we discussed is the phenomenon of “street politics” that continue to shape developments in virtually all Arab countries – in both the group of six Arab countries that experience major changes (Tunisia, Egypt, Libya, Syria, Yemen and Bahrain) and other countries where unprecedented political actions that occur on the street or on the internet do not reach the level of calling for regime change (Jordan, Kuwait, Morocco, Oman, Saudi Arabia).

The now continuous spectacle of large numbers of people in the streets demonstrating against some policy, or some person or political group, represents not only a new kind of politics, but perhaps also a new center of gravity of political action at the local and national levels. Events in the street now often determine how state policies are shaped or institutions created.

Street politics are not new in the Arab world, for small groups of people have often taken to the street in recent decades to express their anger at rising prices, poor state services, or political autocracy, but these one-off demonstrations have always been controlled by the state’s police power. Street politics today are different, I suspect, because the demonstrations last for months or years, and those men and women who take to the street are doing two things simultaneously: They are expressing their views on specific issues or persons, and they are actively resisting the actions of those who are in power or who threaten to seize power (such as the military, the Muslim Brotherhood, or the evicted old guard).

It is probably safe to say that this kind of street politics that both expresses an opinion and actively resists a foe started in the Arab modern era with the first Palestinian intifada against the Israeli occupation, which lasted five years starting in December 1987. The people on the streets today across the region are mostly opposing and resisting, clearly aware of what they oppose, and only occasionally articulating the specifics of what they seek to occur. Having brought down bad old systems, they have not yet found the means to construct new political structures to replace the toppled former regime.

So can we refer to this phenomenon of street politics as part of “civil society”? Is it realistic to speak about “civil society” when the lines between the individual and the state have become so blurred in the past two years? I do not think we can, because the activism of millions of Arab men and women is challenging established autocratic orders without creating stable new orders. The masses of demonstrators in the street in many cases are not organized into clear groups, with expressed aims and identifiable leaders. The crowds are often ad hoc gatherings that are generated spontaneously, merely a mass of many individuals rather than an organized association of members.

In taking to the street to engage in this new form of politics, these people in fact are also learning to engage in largely peaceful if slightly chaotic political contestation in a new public sphere that never existed before in the Arab world. They are giving form to that valuable space in the public sphere where traditional civil society activities occurred, and where real political contestation takes place in today’s exciting new world. 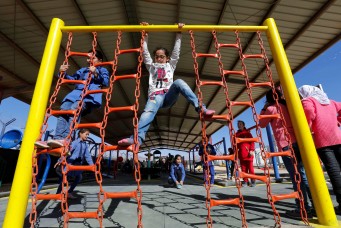 Civil Society for the Displaced