The failed military coup in Turkey on July 15 made for dramatic political theater. While the coup attempt itself was a shock to virtually all observers of Turkish politics, the fact that an attempted coup took place was also understandable to those familiar with Turkish political history and to those nervously observing the mounting tensions at the heart of contemporary Turkish politics. The meaning of the military’s brazen action and the governmental response will be the subject of dispute for some time. Unfortunately it is already clear that the coup has helped to trigger a rapid and unremitting deterioration in governance and the rule of law in Turkey.

What made the attempted coup surprising was that its success seemed so improbable given shifts in Turkey’s political situation since the last major military intervention in the 1990s. In the last two decades, Turkey has developed closer ties to an international system that rejects the principle of military interventions, enacted constitutional changes that consolidated civilian control over the military, and developed a populist domestic politics in which half of the country outspokenly supports the current government and its controversial president, Recep Tayyip Erdoğan. Under these circumstances, it was always much more likely that any attempted coup would fail than succeed. And yet, a substantive faction within the military chose to launch one anyway.

The meaning of the attempted coup depends on how one interprets recent Turkish political history. Three lenses, in particular, can be used through which to see the origins and meaning of the failed putsch.

The first lens is one in which the Turkish military has a historic role in upholding the constitutional foundations of the Turkish state, acting as a benign and far-sighted institution at critical junctures when elected governments have proven unable or unwilling to maintain stability, democracy, and the rule of law. Direct Turkish military interventions in 1960, 1971, 1980, as well as a non-violent intervention against Turkey’s Islamist prime minister in 1997, all aimed to restore stability and ensure that Turkey’s secular, statist democracy would be upheld. In each intervention, elected political leaders were ousted and banned from future politics. In each intervention, the military calculated that its role was to restore core Turkish political values and institutions, aligned with the ideological legacy of the Republic’s founder Atatürk.

Using this lens, the attempted coup can best be understood as a desperate and failed attempt by a reluctant military to contain an ambitious, undemocratic, Islamist government that has taken the Turkish republic too far from its political roots and principles. This is the lens used by many older and secular Turks who have long seen the military as a defender of core constitutional values, despite the often bloody nature of the military’s interventions.

The second lens focuses on what is known in Turkey as the “deep state,” or networks of power and influence that exist underneath formal political institutions only to emerge suddenly to illegally challenge the government and defend their own interests. Evidence for the existence of this deep state has come to light on a number of occasions, whether it be through the exposure of ties between politicians, police, and the mafia as in the Susurluk affair in 1996, links between the military and ultranationalists in the Ergenekon case beginning in 2008, or more recent evidence that senior military, judicial, and bureaucratic figures are followers of Fethullah Gülen, who runs a secretive Islamic civic organization with loyal members in Turkey and around the world.

By this logic, the attempted coup is irrefutable evidence of secret conspiracies designed to undermine the legitimate Turkish state and elected government. Many of these ongoing “conspiracies,” particularly those blaming the Gülen movement, have been clearly exaggerated by the government for political purposes. However, this is the lens through which the Turkish president sees the attempted coup, as do millions of his supporters throughout Turkey. While evidence for the motivations of the plotters is not yet clear, the attempted coup occurred shortly before some planned administrative changes in the military, in which those deemed loyal to the Gülen movement may well have been purged.

The attempted coup is politically valuable to President Erdoğan as it offers concrete proof that conspiracies against the government do exist. It therefore makes it much easier for the state to challenge political enemies, branding them as illegitimate actors using illegal means to undermine the legitimate, democratically elected government.

The third lens is one through which the attempted coup can be seen as an inflection point that rapidly accelerates Turkey’s dramatic descent into authoritarianism. Through this lens, recent Turkish political history is neither one of the triumph of elected democracy over the military, nor of an unconstitutional move towards Islamist ideology that must be stopped by any means. Rather, it is the sad story of a fragile democracy that has been systematically hollowed out by the ambitions of a charismatic but egocentric president who has put his personal interests above those of his country and its democratic stability.

Through this lens, the government has repeatedly undermined Turkey’s once positive model of the coexistence of Islam and democracy by its efforts to muscle out the independent media, by compromising the independence of the judicial system, by scapegoating the minority Kurdish population, and by its attempts to eliminate all institutional checks and balances in the quest to consolidate constitutional power in the presidency. The foolhardy coup, the success of which was unrealistic from the start, can thus be best understood as the moment when the trend towards Turkish authoritarianism strengthens and consolidates.

The coup provides President Erdoğan with the cover he needs to violate any remaining constitutional constraints in his quest to purge state institutions from those who would legitimately oppose either his purpose or his methods. With many thousands of soldiers and police already taken into custody, as well as thousands of judicial officials detained, this may thus be the moment when any who dare to stand up to Turkey’s government will be purged from state institutions. This is the lens through which the implications of the attempted coup on the future of Turkey can best be understood.

It is revealing that even the most committed of Erdoğan’s democratic political opponents, including the opposition CHP, MHP, and HDP parties universally condemned the attempted coup. It has done them no favors in the fight for greater democracy in Turkey. Whatever the intentions of the military faction that led it, last week’s violent attempt to overthrow Turkey’s increasingly authoritarian government did immeasurable harm to the narrative of those who legitimately oppose the Turkish government and are attempting to change it through constitutional means.

Quinn Mecham is an assistant professor of political science at Brigham Young University. He has written for the Washington Post and is the author of numerous academic articles on Turkey and on political Islam.

Lessons from the Turkish Coup Attempt 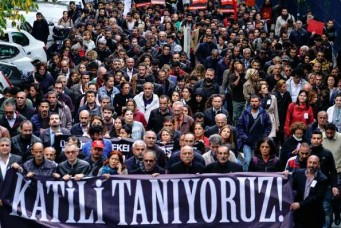 Convergent Authoritarianisms in Egypt and Turkey