During his visit to Africa last week, Pope Francis touched on a profoundly important theme that should be carefully pondered by those around the world who wonder why domestic and international terrorism, corruption, and illegal migration are on the rise everywhere. During his visit to the Nairobi slum district of Kangemi the Pope said that people living in slum conditions are victims of “new forms of colonialism” by rich countries.

Talking about the dire living conditions he saw and heard about—tin sheet shelters, pit toilets, poor or no health facilities, unsanitary conditions, and having to buy water of dubious quality from communal taps—Francis said that, “These are the wounds inflicted by minorities who cling to power and wealth, who selfishly squander while a growing majority is forced to flee to abandoned, filthy and rundown peripheries.”

He said that land, decent jobs and basic housing are “sacred” rights, and his choice of the word “colonialism” to describe this situation was appropriate. Hundreds of millions of poor people living in squalid conditions without any recourse to political power to improve their wellbeing will react today in the same way that their grandparents and great-grandparents did during the great anti-colonial uprisings of the first half of the twentieth century across much of the South.

He should know, because during his decades of church service in Argentina, including as archbishop of Buenos Aires, he frequently visited shantytowns that mirrored the same dynamics he saw in Africa this week: a wealthy, corrupt ruling elite with close links to global political and economic circles, amidst masses of ordinary men and women who live hand-to-mouth and day-to-day without any possibility of using political, legal, mass media or social organization mechanisms to change their degrading conditions.

Francis called what he saw, “New forms of colonialism that would make African countries parts of a machine, cogs on a gigantic wheel.”

The important issue here is not just how the Pope described this new colonial situation; it is rather that colonialism will always elicit an anti-colonial struggle by those who are denied their basic rights and their very humanity. If that struggle cannot be waged peacefully to transition from corrupt, disdainful autocracies to more participatory, responsive, and accountable democracies, then we should not be surprised if desperate men and women, even children, resort to violence and illegal activities in order simply to meet their basic biological needs for food, water and shelter and to stay alive. In cases where this struggle is unsuccessful, then staying alive in conditions similar to the life of an animal in a jungle has no meaning—and individuals here and there decide to end their life by making a statement that will disrupt the lives and comforts of others.

As poverty, sub-human living conditions, and total political marginalization have pushed hundreds of millions of people across the South into desperation, not surprisingly many of them have turned to their religious institutions to provide them with those critical things that their governments have denied then: the sense that a caring power hears their pleas, basic social services like water and health care, and a voice that speaks on their behalf in the chambers of national or global power.

Over half of the residents of the Kenyan capital of Nairobi live in the kind of slums that Pope Francis visited. Such conditions are replicated all across Africa, Asia, and the Middle East. So it is no surprise that non-violent Islamic movements like the Muslim Brotherhood continue to thrive across the Islamic World, just as the Catholic Church has been providing basic services to citizens and refugees across neglected areas throughout Africa. Consequently, the number of Africans who follow the Catholic Church has tripled in three decades. For the same reasons the brand of “liberation theology” that some in the Catholic Church espoused across South and Central America in the last half century has remained relevant and vibrant.

This has nothing to do in particular with any specific country where people live across Africa, the Americas, or the Middle East, or whether they follow Islam or Christianity. The critical dynamic here is that when colonial power structures ravage the lives of ordinary people for decades on end, and those people have no recourse to political, social, or economic redress of grievances, they will usually turn to God and their religion as a last resort to salvage their humanity. If the colonial exploitation continues unabated, that explosive situation will usually end in something dramatic and disruptive—revolution, mass uprisings, civil wars, and large-scale internal displacements and illegal migrations.

Pope Francis warned about these dangers decades ago in his home country of Argentina, and he does so again today on a global scale. The world would do well to hear him out, and act on the dangers he speaks of.

Listen Carefully… “Burn It Down, Man” 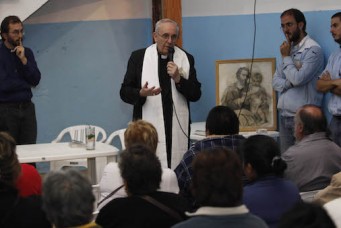 The Education of Pope Francis

Indeed, When You Listen, You Learn