The scholarship and serious popular literature on the Arab region in much of the Western world has improved vastly in the past few years, for the simple reason that authors have been forced to write about the realities of what ordinary Arab men and women have put on the global agenda. We still see the occasional piece of intellectual exhibitionism by oddballs like Ayaan Hirsi Ali, Daniel Pipes, most Fox television hosts, and the occasional indigenous Arab knucklehead who respond to the current turbulent state of the Arab transformations by decrying the inability of Arabs and Muslims to practice democracy or master the art of politics. Yet the dominant trend is clearly towards much more accurate and relevant writing on the Arab world, as millions of ordinary citizens express themselves and struggle to transform their societies, and infuse them with the values of democracy, freedom, dignity and social justice that remain powerful and structural drivers of Arab identity.

Most scholars and media analysts who seriously study what is actually happening on the ground across the Arab world at their best analytically seek to answer two core questions: First, what are the meaningful changes in actors and power relations on the ground that are transforming the political-social orders of our region, and which of those changes are temporary or permanent? Second, what are the underlying values that define the peoples of the Arab countries, and how do those values shape the core aspirations, routine political conduct or occasional insurrectionary bursts of millions of Arabs?

Understanding the Arab people and societies as we really are—and not as The Wild Ones of the West would imagine us—is a critical starting point for both Arabs and foreigners who seek better futures for themselves. Scores of fine books and studies by Arabs and foreigners alike have been published in the past few years that delve into that reality and point out its many dimensions across the different cultures of the region, rather than portray a monolithic and static region defined only by ancient religion. The important new elements now being studied include ever evolving social movements, religion-and-politics, the durability and resurgence of the ‘deep state’, the imperatives of social justice and dignity, and the centuries-old interventions of regional and foreign powers that seek influence or control in the region. Most impressive also are web sites in the United States and Europe that compile a wide range of topical and usually impressive writing.

To my mind, among the most useful and readable of these offerings that I have seen is the new book by Dr. Shibley Telhami of the University of Maryland, The World Through Arab Eyes: Arab public opinion and the reshaping of the Middle East. I single it out because of its double advantage of analyzing current attitudes and developments across the region while also grounding that analysis in the past ten years of public opinion polling that Telhami has done across the Arab world. This combination buttresses Telhami’s current observations with a rich and ever-relevant body of factual historical data that reflect the attitudes, values and aspirations of those ordinary men and women who have risen up recently to take command of their own destiny.

Telhami’s combination of solid substance, readable style and pertinent analytical insights is brought to bear on a series of key dimensions of public opinion and political values and aspirations across the Arab world, including: the centrality of the Palestinian-Israeli conflict, the quest for democracy, religious-secular balances, perceptions of the current uprisings, the interplay between national and pan-Arab identities, the role of media, and attitudes to the United States, Israel, Iran and other major regional actors.

His closing chapter on how Arab public opinion will influence the reshaping of the Middle East is the best summary of the likely implications of the current awakening and activation of Arab public opinion that I have seen to date, blending the hard facts of public attitudes with the unpredictable nature of political and social change. The eight points he makes there touch on the varied transformations in the Arab countries and their enduring, evolving and pervasive nature, the role of other factors beyond public sentiments, changing regional power configurations, and—apologies to the Wild Ones of the West and our own oddballs, but here it comes again—the continuing and central impact of Arab attitudes to the conduct of Israel and the United States.

Telhami once again shows the bounty of combining the best of American scholarly traditions with the fruits of on-the-ground research and analysis in the Arab world. He links current developments with a longer legacy of popular values and attitudes that will always shape those developments. He reminds us again of the importance of mustering the honesty to try to really understand the sentiments and aspirations of millions of ordinary Arabs who are now turning their world—and perhaps others’ worlds—upside down.

Egyptians As They Really Are

The Rule of Law Triumphs — Sort of — in the USA

Arabs Can Walk and Chew Gum 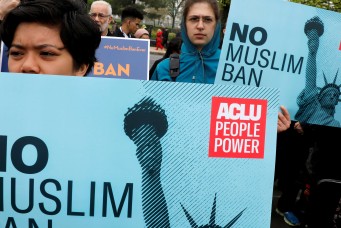