A recent Pew Research Center study found that in 2016, assaults on Muslims in America surpassed incidents reported after the September 11, 2001 attacks. Members of seven different U.S. state legislatures introduced anti-Sharia legislation in 2018. The Washington Post reported thirty-six separate incidents between 2011 and 2017 where Donald Trump used anti-Muslim rhetoric, delivering such lines as “I think Islam hates us,” and reading the lyrics to “The Snake,” an Al Wilson song about a woman who is attacked by a snake she nurses, in connection to immigrants and Syrian refugees.

How is it possible, then, that the attitudes of the American public toward Islam and Muslims have steadily improved from the 2016 presidential campaign to the end of Trump’s first year in office? Conducting six polls over this period, public opinion expert and political scientist Shibley Telhami found that American perceptions about Islam and Muslims have become “more and more positive.” Telhami is the Anwar Sadat Chair for Peace and Development at the University of Maryland and has a record of conducting public opinion polls in the United States and the Arab World since 1989. He interprets the increase in positivity as a reaction against the spike in anti-Muslim feelings. As Telhami explained at a talk he delivered at the American University in Cairo, the sentiment is, “Donald Trump says it’s bad, so I’m going to rally behind the Muslims and protect them.”

As statistics about Islamophobia in America show, not all Americans hold this sentiment. Opinions on Muslims and Islam remained negative among Republicans throughout the polling period. Favorable views among Democrats increased, however, in some cases by 18 percentage points. Telhami dismissed the idea that Democrats and independents suddenly became more educated about and tolerant of Islam. Instead, he pointed to an increase in identity politics among Americans that is spurred by deeper divisions. “It’s identity politics on both sides,” Telhami explained at AUC. “It’s people who are shifting their views on issues, not because they’re objectively analyzing the issues, or taking some analytical position relating to the issues, but because you’re either with this camp or you’re with that camp.”

A similar trend is visible in U.S. public opinion toward the Israeli–Palestinian conflict. Before Trump, Telhami found that two-thirds of Americans have consistently wanted the United States to be evenhanded in the conflict. But there is a growing division over political support for Palestine. In his most recent poll, Telhami found that a lopsided majority of Republicans want U.S. policy to openly lean toward Israel. While 90 percent of Democrats still want the United States to be unbiased in the conflict, some are now beginning to tilt toward supporting Palestinians. Even more surprising, he found that a majority of Democrats support sanctioning or boycotting Israel for continued settlement expansion.

Telhami was cautious about whether this shift in public opinion could lead to a shift in U.S. foreign policy. Incidentally, his interest in polling was sparked years ago by the realization that American foreign policy does not align with public opinion. Although the majority of Americans wanted an impartial U.S. policy toward the Palestinian– Israeli conflict when he began polling, those who advocated for a pro-Israel stance ranked the issue higher in their priorities than the average American, which thus had an outsized effect on policy. Today, members of Congress still largely support Israel and are seeking to pass a law to criminalize boycotts of the country. Even Democrats who are beginning to lean toward the Palestinian side are not motivated by their passion for the cause. “The Arab–Israeli issue is seen not simply as an issue in and of itself, meaning about Arabs or Palestinians. It is seen as a prototype of justice, as a prototype of human rights, as a prototype of international law,” Telhami told the Cairo Review.

Even so, upholding liberal values has emboldened Democratic politicians to challenge the common narrative. Bernie Sanders energized his base by criticizing Israel, and in recent months, several candidates for Congress have also taken a more critical position on Israel and still succeeded in elections. But can a divided America really cause a meaningful change in U.S. policy toward the Palestinian–Israeli conflict? According to Telhami, only time will tell, but right now, “it’s much easier to stay with the status quo and not rock the boat.” 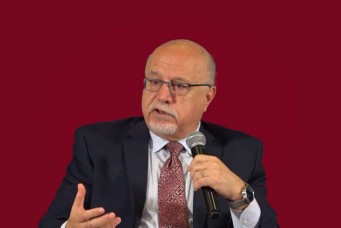