As Syria peace talks reconvene in Vienna, most of the headlines downplay or ignore the positive momentum that was injected into the diplomatic effort. Given the magnitude of human calamity that has engulfed Syria, some skepticism and cynicism is understandable. However, we now have a process where all key foreign actors are at the same table. The first round of talks produced a modest but important set of nine principles that will serve as the backbone for any solution to the crisis. As the old saying goes, “Now the hard part begins.”

To advance the diplomatic process, it is vital for all sides to move past the airing of grievances and start narrowing their differences. This is particularly true now that Iran is at the negotiating table. Until the Vienna talks began, more time was spent admonishing Tehran’s support for President Bashar Al-Assad than probing how to shift its position. Now that top Iranian decision-makers have accepted the invitation to join multilateral negotiations, it begs the question: What does Iran want in Syria? Examining why Tehran prioritizes this issue sheds light on what kind of endgame it is likely to accept.

A quick glance at the geopolitical chessboard reveals why Syria policy has been woven into Iran’s core national security interests. Tehran’s foothold in Syria provides a strategic bridge into Lebanon for empowering Hezbollah. This, in turn, provides Iran with geostrategic depth in the Arab World and deterrence vis-à-vis Israel. More generally, Iranian decision-makers have long opposed changing their policies when under pressure from foreign powers. More specifically, they believe that failure to oppose regime change in Syria will embolden their adversaries to pursue the destabilization or overthrow of governments elsewhere in the region—including in Iran. If Tehran has red lines on Syria, these are likely the most prominent.

With that in mind, it is no secret that Iran would prefer Al-Assad stays in power. Who wouldn’t want to have their cake and eat it too? Iran’s aforementioned security interests would remain intact, and Al-Assad would be weakened over the long-term, thereby deepening the duration and scope of his reliance on Tehran. While this endgame is desirable, some Iranian officials privately concede that it is not feasible. Other than Russia, no foreign power would accept a return to the status quo in Syria—all but guaranteeing that the proxy war further escalates.

Some of Iran’s adversaries have championed the opposite: Iraq-style regime change in Syria. This endgame is neither desirable nor feasible. Precisely because Tehran’s aforementioned red lines include maintaining Syria’s current geopolitical orientation, it is unlikely to accept any attempted solution in which Syria’s security services—and by extension, Iran’s strategic bridge to Lebanon and Hezbollah—are overturned. How Iran’s adversaries accommodate themselves to this fact remains unclear. If they double down on regime change in Syria, Tehran may try to carve out an independent state governed by its longstanding Syrian allies. That being said, going down this path is fraught with risk for all sides. Redrawing borders according to ethnic, religious or geopolitical grievances opens a Pandora’s box that threatens the stability and power projection capabilities of Iran and all Arab countries.

The most desirable and feasible endgame—for Iran and its foreign counterparts at the negotiating table—is a power-sharing arrangement. Iran will likely accept a Syria in which Al-Assad is no longer head of state. In return, however, it will almost certainly insist that Syria’s security apparatus remains largely intact, and any opposition members and groups must be mutually vetted and agreed upon by the foreign powers negotiating in Vienna. Changing civilian leadership while retaining security leadership provides the best hope of preventing an Iraq-style disintegration of the Syrian state, and the perpetual chaos that ensued.

The devil, of course, is in the details. A power-sharing arrangement would then require haggling over every word and concept that goes into any agreement. Reaching that point is critical. Once all sides are locked into the diplomatic process—as they now appear to be—the cost of failure slowly becomes higher than the cost of success. That paradigm shift does not guarantee success, but it does sharpen the focus of each country at the negotiating table, shave down mistrust, and increase their ability to absorb compromise. Progress will likely be measured in months or years, not days or weeks.

The Vienna talks are an unmistakable sign that all sides have greater flexibility in their respective positions than they have thus far let on. By sitting at the same table, Iranian decision-makers and their counterparts have reached the same conclusion: Durable solutions to the conflict require the buy-in of every country with the capacity to wreck the solution. Therefore, until they jointly produce face-saving ways to back down from their maximalist positions, they will continue abetting the proxy war carnage in an attempt to maximize military gains and build up bargaining chips for the inevitable day when they agree—in word and deed—to stop the killing.

Reza Marashi is research director at the National Iranian American Council in Washington, DC. His articles have appeared in the New York Times, Foreign Policy, Atlantic, and National Interest. On Twitter: @rezamarashi. 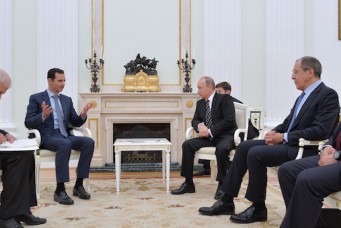