Cairo was dark when U.S. Representative Patricia Schroeder stepped off the plane in Egypt. Very dark. It was the beginning of the 1973 Middle East war, Israeli forces had reached Kilometer 101, and the capital was under a blackout. She had arrived with a congressional delegation from the House of Representatives Armed Services Committee to meet with President Anwar Sadat, then hunkered down at a desert military outpost. “We had no embassy here then,” she recalled, “so our delegation relied on the Swiss to ferry us around.” Schroeder recently returned, now retired from Congress, to a very changed Egypt, and in what turned out to be quite a different undertaking: briefing Egyptians on the flaws of democracy—American democracy, that is.

At the time of her initial visit to the country, Schroeder was a 32-year-old newly elected Democratic Party legislator from Colorado, one of only fourteen women in the Congress, and the first ever to secure a seat on the important Armed Services Committee. She had been elected on a platform calling for women’s rights and opposing the Vietnam War. Though a Harvard-educated attorney and an accomplished civil rights advocate, a local newspaper condescendingly greeted her candidacy with the headline, “Denver Housewife Runs for Congress.” Among the achievements of her twenty-four years in Congress, she was instrumental in the passage of the Family and Medical Leave Act, and co-founded the Congressional Women’s Caucus, which she chaired for ten years. On the Armed Forces Committee, she sparred with Cold War hawks and worked to curb military spending.

After Schroeder left Congress in 1997, she authored a memoir with the half-joking title, 24 years of House Work…and the Place Is Still a Mess: My Life in Politics. She recounted stories about how Washington works during a recent talk hosted by the Prince Alwaleed bin Talal bin Abdulaziz Alsaud Center for American Studies at the American University in Cairo. She now serves as a National Governing Board member of Common Cause, an organization promoting accountability in government and reforms to the campaign finance laws. She bemoaned the fact that in the 2012 presidential election, some 60 percent of campaign funding to the two main candidates was donated by just 16 percent of the American people. So-called “Super PACs” (Political Action Committees), which enable anonymous donors to funnel limitless amounts of money to candidates, have Schroeder worried about the state of democracy in the U.S.

Says Schroeder: “When you are a candidate now you wake up in the morning and their campaign managers say to them, ‘You have to raise this today. And if you don’t raise it, you have to raise double that tomorrow, and if you don’t raise that, then you have to raise triple that the next day.’” As a result, candidates spend their time on the phone fundraising rather than thinking about the country’s problems. “It shouldn’t be a big shock that when someone gives you a big check, they aren’t just doing it for good governance,” Schroeder explained. “They want something in return.”

An Overview of Algeria’s Upcoming Elections 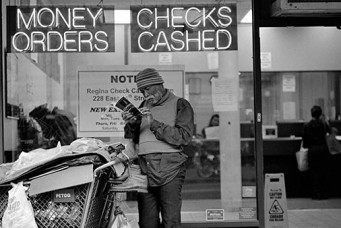