A political prisoner freed. An affidavit documenting police abuse. An audience with lawmakers. When Egyptians rose up in 2011, human rights campaigner Heba Morayef dared to hope that such incremental accomplishments were giving way to freedom and democracy. But the dream didn’t last for long. As the Egypt director of Human Rights Watch sees it, conditions scarcely improved during interim military rule or under the administration of the first democratically elected president, Mohammed Morsi. Now, after the dramatic overthrow of Morsi and the bloody security crackdown on the Muslim Brotherhood group last summer, Morayef is taking a decidedly somber view. “This moment is infinitely depressing,” she told me over coffee in mid-September.

Morayef believes that the violent dispersal by security forces of Morsi supporters on August 14, after a six-week sit-in outside Cairo’s Rabaa Al-Adawiya mosque, is an ominous indicator of where Egypt may be headed. “While we fully recognize that security forces have a right to use lethal force, that right is not absolute,” she says. In the aftermath of Rabaa, indiscriminate arrests based on political affiliation and prolonged detentions without trial have become more common. Egypt’s decision-makers, she believes, “have made a decision to go for a full-blown security response to deal with the political crisis, and for that they want a blank check.”

To Morayef, part of the problem is the failure of the state as well as Egyptian society at large, in the midst of the post-revolution euphoria, to embrace important rights concepts such as proportionality and accountability. The country, she says, tends to see human rights as an abstract long-term goal, rather than something to be practiced every day.

Intense pressure to support the military crackdown, with more than a whiff of xenophobia in the air, has made the work of human rights advocates even more trying. In private, some Egyptians accuse human rights defenders of being Muslim Brotherhood supporters, or working as spies for the West. Human rights campaigners are shunned by Egyptian media, lest they counter the official narrative of the summer crackdown—that the Muslim Brotherhood is a terrorist organization and had lost the right to govern.

Morayef’s path to becoming a rights advocate began as an undergraduate at the American University in Cairo, where she studied international law and human rights. After earning a degree in political science, she worked at the United Nations Development Programme’s Human Rights Capacity Building Project in Cairo. Later, while getting a master’s degree from the London School of Economics and Political Science, she worked at Article 19, an organization defending freedom of expression, and at Amnesty International. As chief of Human Rights Watch’s Egypt office, she has compiled reports on everything from abuses by Egyptian security forces and election fraud to harassment of opposition activists. It is sometimes grim work that can include trips to the morgue—forays into the “little corners” of society, as she puts it.

It is also work that never ceases in Egypt these days. As we talked, Morayef’s smartphone beeped. The Egyptian coast guard, said an email message from a colleague, had opened fire on a boatload of Syrian refugees off the port of Alexandria; two people were killed. The news is disturbing, yet she stays calm, responding to more emails pouring in, and continuing our conversation. “You have to show some empathy, but you learn to do that a bit artificially,” she says. “You have to struggle to contain any emotional response.”

Morayef speaks about the challenges ahead; one of her greatest fears is that Egyptian society may begin accepting human rights abuses as something normal. “We’re back in damage control mode,” she says before going off to deal with the next human rights crisis.

A Generational Battle Among Brothers 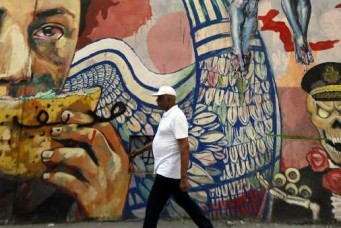